Inspired by Scripture and rooted in history, this story imagines a year in the boyhood of Jesus. Remaining true to the character of Jesus revealed in the Bible, 'The Young Messiah' is an inspirational story about the childhood of the Savior for the whole family. When the mystery of Jesus' divinity begins to unfold in His early years, He turns to His parents for answers. But Mary and Joseph, in an effort to protect their child, are afraid to reveal all they know. How do you explain the ways of the world to its Creator? How do you teach the Teacher? How do you help the Savior who came to save you? Follow the young Messiah as He and His family take the extraordinary journey from Egypt to Nazareth and on to Jerusalem – where His true identity and profound destiny are revealed.

There's a difficulty when supplying a well-known story an "origin" film of sorts, the audience is already well ahead of the story you're about to tell. Any origin film from superheroes to horror icons have fallen into the perilous traps of feeling the need to tell an unnecessary origin film. To that end, it shouldn't be all too surprising that a faith-based film would attempt to do the same thing and focus on the childhood years of Jesus Christ. While 'The Young Messiah' certainly has fertile territory for some potentially interesting and dramatically satisfying material, the film never reaches those shores with any genuine earnestness and the film becomes void of any compelling drama.

Jesus (Adam Greaves-Neal), his mother Mary (Sara Lazzaro), his father Joseph (Vincent Walsh), his uncle Cleopas (Christian McKay) and cousin James (Finn Ireland) lead a nomadic life. As they enter one town, they almost immediately have to leave because something mysterious, something that could almost be called "miraculous" seems to happen around Jesus. After Jesus resurrects a bully who was taunting him and who accidentally died from a fall, the family once again has to pack up and leave. Why the family leaves is never fully explained, much to Jesus' irritation. Unaware of who he is or why he can do the things he does, the young Jesus seeks answers while performing any number of miracles on the long journey to Jerusalem for Passover.

Unaware to Jesus and his family, Herod (Jonathan Bailey) has heard of the miraculous exploits of a seven-year-old boy from Bethlehem. A seven-year-old boy who by Herod's orders should have been killed long ago by a Roman centurion called Severus (Sean Bean). Severus is tasked with once again finding this specific child and carrying out Herod's orders for execution. As the centurion and his men scour the countryside, more stories of miraculous happenings crop up. Stories about a child bringing the dead back to life, a child healing a sick near-death man, stories so fantastic they can't be true. But the very possibility that these stories are true and the young child Severus is charged with finding and executing is the cause of them puts the dedicated Roman soldier at a moral crossroads. 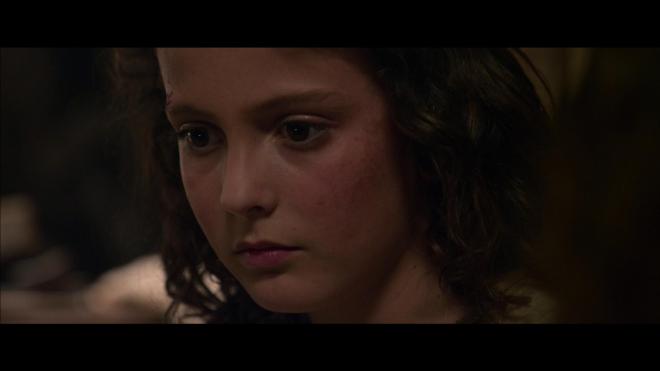 While a person of belief, I am someone without a religious affiliation. I am certain of some things, however, I choose to bask in the mystery of the unexplainable as some things are just unknowable. Some people chose to take to various religious texts as rote certainties, while others take a more metaphorical approach. 'The Young Messiah,' based on the novel by Anne Rice (of The Vampire Chronicles fame) takes everything on face value without exploring any real depth of its content or the ideas of the life of a young Jesus Christ that it raises. The film attempts to be exciting by providing the story of a young Jesus of Nazareth which often goes untold. The problem is the film approaches the subject matter already knowing the end, so there is little mystery or interesting ground to cover making the film about as dramatic as reading a roadmap. We know the beginning, we know the end, making the roadside attractions in the middle amusing but forgettable.

Setting aside any questions of authentic casting choices, I will give credit to the group of fine actors assembled for 'The Young Messiah.' In the scheme of things, they're all given relatively thankless roles without any exciting material to mine. Adam Greaves-Neal is a fine young actor who has to carry a lot of moral weight as Jesus. He's a child who can do miraculous things but there isn't ever much discussion about whether he should or should not use his godly gifts even if they can erase a great evil. Sara Lazzaro delivers a fine turn as an early-twenties Mary, but again, like many of the other actors, she's left with a character whose sole expression is a look of concern. As is the case with Vincent Walsh's portrayal of Joseph. About the only actor who turns in a three-dimensional character is Sean Bean as Severus. His Severus has a long history of doing morally questionable acts under orders as a soldier and Bean handles the material perfectly. Had the film focused on him as the central character, we could have had a grand film in the vein of 'The Robe.' But instead, we have little doubt from the beginning to the end what Severus is going to do once he finds Jesus and the material sags.

My problem with a majority of faith-based films, not as a genre exactly, but in their execution is that they preach to the choir. I've given this genre of filmmaking a tried and true, honest effort and while some films work, the majority of them just don't do it for me. A number of these films are populated with one-dimensional characters facing morally certain obstacles in life. There is no ambiguity to the plots or characters, the good are good, the bad are bad, and there is only one right course of action in every situation the characters face. Sadly, a film that should be captivating and interesting like 'The Young Messiah' is exactly this type of film. There is a scene where Jesus and his family encounter a slave-owner attacking and is presumably about to rape a slave girl named Riba played by Duné Medros. When the slave owner is killed, the movie stops to explain why the death of that man was just. That's okay, however, the film completely sidesteps the moral ambiguity that Jesus is the son of God with the ability to resurrect and save any soul. Why is that man's soul, even if he was previously a bad person about to do a terrible act undeserving of saving? While I don't condone the actions of the slave owner in any way, the film puts it out there as some sort of moral quandary for Jesus to solve but is content with not actually confronting the dynamics of the questions and shirks any moral responsibility. If you want your faith-based entertainment to float on the surface, I suppose 'The Young Messiah' gets the job done. However, if you're looking for anything resembling a deep and genuine exploration of faith and the overwhelming responsibility that comes with being the son of God and a savior, you're not likely to find it here.

'The Young Messiah' arrives on Blu-ray courtesy of Universal Home Video and Focus Features as a Blu-ray, DVD, and Digital HD set. The film is pressed on a BD50 disc and housed in a standard 2-disc case with identical slip cover. The Blu-ray disc opens with trailers for other upcoming Universal Home Video releases using the BDLive feature and change depending on what is downloaded in the moment before arriving at a static image main menu with traditional navigation options.

Shot digitally with Red Epic cameras, the 2.40:1 1080p presentation of 'The Young Messiah' looks fantastic. Fine details are abundant in every frame from facial features to the rough texture of clothing to the individual grains of sand. Colors tend to favor the warmer yellow earth tones. Flesh tones appear healthy and natural however the blue sky can appear a tad pale and red blood can appear a bit orange in places. Aside from that slight quibble, the rest of the image is incredibly impressive. Black levels are deep and inky and provide a very notable sense of depth to the image at all times. Crush is never an issue, even when the film moves to night scenes or in the cave-like court of Herod. Only once did I notice any kind of slight banding but it was so slight you may not even notice it. Taken as a whole this is a very good looking image, it may not be the most impressive ever but it gets the job done.

'The Young Messiah' comes packed with a strong and stable English DTS-HD MA 5.1 audio mix. While most of the film is dialogue driven and keeps the front/center channels, there is a fair bit of action and a few crowd scenes that make great use of the surround channels. Even during the quieter moments of the film, there is plenty of atmospheric sound elements at play to keep the side channels engaged and provide something of an immersive auditory experience. The score by John Debney is very good at keeping the mix full even if it is largely cribbed from the work he provided for 'The Passion of the Christ.' Imaging is solid as there are plenty of moments calling for strong channel movement. Levels are also balanced well and aside from a couple very quiet scenes, I didn't really ever have to adjust my volume.

Audio Commentary: Director/Co-Writer Cyrus Nowrasteh and Co-Writer Betsy Giffen Nowrasteh provide a decent if surface commentary track. They're obviously passionate about the material, but they don't really go into much detail about the story itself or exploring characters in a new way.

The Making of 'The Young Messiah': (HD 10:12) Cast and crew participate in a pretty typical EPK style extra feature.

In the genre of Faith-based films, 'The Young Messiah' really could have been something dramatic and interesting had the filmmakers chosen to go towards a meaningful direction with the material. The story of a young Jesus learning who he is and his place in the world could have been a fantastic coming of age film, but the film plays things on such a surface level, there is little meaningful drama to mine from the two hours of screen time. Universal Home Entertainment brings 'The Young Messiah' to Blu-ray in fine order with a very good A/V presentation. The extras are pretty slim, but they do provide some background information about the film. Taken as a whole I can't help feel like 'The Young Messiah' was a missed opportunity. It easily could have been a great film but its flat story keeps it from being something I would recommend. If you're curious give it a rent.

Sale Price 17.55
Buy Now
3rd Party 29.99
In Stock.
See what people are saying about this story or others
See Comments in Forum
Previous Next
Pre-Orders
Tomorrow's latest releases