J.P. Tannen (Jon Voigt) wants a second chance to be a father to his children...but someone else has taken his place. Determined not to just be a friendly "uncle" in their lives, he gets permission from his ex-wife Kathleen (Millie Perkins) and her new husband (Richard Crenna) to take the kids on a Mediterranean cruise.

But shortly after setting sail J.P. finds that reconnecting with his kids isn't going to be as easy as he had hoped: his youngest son has learning disabilities, his daughter harbors resentment and his eldest son is rebellious. Feeling overwhelmed, and reverting to his old irresponsible ways, J.P. is convinced that he's a failure as a father.

Then, a crushing, emotional tragedy back home J.P. to attempt to rise to the challenge of his children's needs to become the father he always hoped he could be.

"I haven't had my coffee yet."

There are days where one has to question why a particular movie was made. While the obvious and cynical answer is to make a boatload of cash, other times the motivation may not be so overt. It's no secret that when a particular movie does well, a whole host of imitators are put into development - especially when a film hits the grand slam at the Oscars: Best Picture, Director, Actor, Actress, and Screenplay. Robert Lieberman's 1983 melodrama 'Table for Five' produced by and starring Jon Voight is certainly a well-meaning film but it ultimately boils down to being an attempt to cash in on the family drama formula that worked so well for Robert Benton's 'Kramer vs. Kramer.'

J.P. Tannen (Jon Voight) hasn't exactly been around a whole lot for his kids. As a middle-grade professional golfer, he was doing a lot of globetrotting playing in tournaments, but he was also shirking any real family responsibility. As a result, his wife Kathleen (Millie Perkins) divorced him, taking their two biological children Tilde (Roxana Zal), Truman (Robby Kiger), and their adopted son Trung (Son Hoang Bui) with her. Four years later, J.P. isn't a professional golfer anymore, but he has dreams of creating a real estate empire. As he's gotten himself somewhat on his feet, he believes he's now ready to actually be a father to his children. The problem is J.P.'s children already have a father who provides for all of their needs, their stepfather Mitchell (Richard Crenna).

The presence of Mitchell isn't going to keep J.P. from his kids. With a harebrained idea that a cruise to Egypt will make up for four years of lost time, J.P. sets out to reconnect with his children and actually be their father. What J.P. doesn't expect to experience are three individuals who have gotten used to going about their lives without him. As he struggles with the responsibilities of being a dad to his kids, J.P. is having a harder time putting away his single man bachelor lifestyle when he meets the beautiful Marie (Marie-Christine Barrault). When J.P. is finally able to own up to his responsibilities to his kids and make a connection with them, tragedy strikes and the struggling family will need each other more than ever. 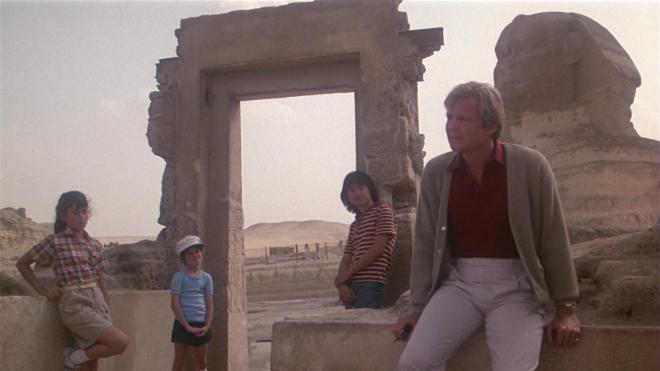 As you sit down to watch 'Table for Five' don't be surprised if you start to wonder if you accidentally navigated away from your Blu-ray player to your cable box and somehow managed to turn on the Lifetime network. While Robert Lieberman's 'Table for Five' is certainly a well-meaning film, the T.V. melodrama stylings couldn't be any thicker. Screenwriter David Seltzer of 'The Omen' fame pulled every trick from the cliche playbook and Jon Voight ran hard with the material trying to score an emotional touchdown with the audience. The problem is the audience knows this playbook and can see the play coming miles away. While the locations in the film are exotic and unique, the plot beats are all too familiar.

From a wise-beyond-her-years daughter to a son with a learning disability who can't read at his age level, to an adopted son to the death of an important character, 'Table for Five' is just running down the story beat checklist. As each box gets marked off, Jon Voight gets a scene where he can show his dramatic range. While I tend to enjoy Voight in most films, the man is trying just too hard with this one. Each big scene after her learns about a problem or has to tell his children some terrible news feels like an awards show highlight reel moment. The scene where he learns his son can't read, that's for BAFTA. When he learns his wife died while he was on vacation with the kids, that's for the Golden Globes. The big moment of responsibility he's been avoiding for over a week where he finally tells his kids the sad news - that's Academy Award gold right there. I don't blame Voight for going for the big win, but when you keep in mind that 'Kramer vs. Kramer' was only a couple years past it's big Oscar successes, 'Table for Five' just ends up feeling like a self-serving melodrama that plays all the cheap tricks to connect with an audience.

This isn't to say that 'Table for Five' is a complete loss. Voight is genuinely very good in this film. He works well with the child actors playing his character's kids. There are some very good, heart-wrenching moments, but there are also so many cornball hamfisted moments that the drama build up is a series of stutters and false starts. By the time the big news drops that Kathleen is dead and J.P. will have to man-up and be a true father you may be slapping your head in disbelief. Then Richard Crenna's Mitchell shows up saying he won't give up the kids without a fight and by that point, your eyes could be rolling. According to the IMDB trivia page, 'Table For Five' was apparently developed based on the experiences Jon Voight, Screenwriter David Seltzer, and Director Robert Lieberman encountered as divorced fathers. If you know anything about the family drama surrounding Voight and his daughter Angelina Jolie, that factoid is believable. The theme "I'm a divorced irresponsible man but can be a good father" is felt throughout this flick. 'Table for Five' isn't an altogether terrible movie, it has its moments, but the story is so melodramatically thick that it feels longer than its two-hour run time would imply. As far as family dramas go, 'Table for Five' isn't not the worst, but it isn't anything special either.

'Table for Five' arrives on Blu-ray courtesy of Kino Lorber and their Studio Classics label. Pressed onto a Region A BD25 disc, the disc comes housed in a standard Blu-ray case. The disc opens directly to a static image main menu with traditional navigation options.

In my review for 'Table for Five,' I liken it's story to a Lifetime TV melodrama. Part of the reason that feeling comes through is due to this film's hazy/muddy 1.66:1 1080p transfer. While there are certain scenes that have the full HD sparkle and life-like presentation, I would say a solid half of the time the image looks overly soft and without any fine detail. Granted, this would appear to be intentional at times to give the image a dreamlike quality to it, but at the same time, closeups and middle shots that should offer some amount of fine image detail and facial features look smooth and waxy. In other news, colors appear natural and even for a late 1970s, early 80s film style. Flesh tones are natural and there is some primary presence if a bit muted. Black levels are decent, not great, there are some moments that look deep and inky while others more hazy/brown. Contrast can be a bit hot in some places leaving the sky to look unusually bright. The print is in decent shape, some small scratches, and speckling being the worst offenders appear during the opening credits. All around an okay transfer, nothing that will blow your hair back nor will it send you crying into the hills.

'Table for Five' arrives with a workable English DTS-HD MA 2.0 mono track. It's a mostly conversational film and this track manages the vocal ranges without any issues. Sound effects and atmospherics are present but subdued. They're there to make a scene sound natural but little else. The audio is free of any age-related issues, although some moments can sound a bit canned as if they weren't recorded properly and dubbed in later, but those are only a couple of quick moments and don't really intrude into the movie. Imaging is pretty much a front/center affair without much sense of movement - even when there is a lot of action happening or people wandering around the ship. The audio works for a quiet movie like this one, but it's nothing dynamic or amazing.

While not being a complete loss, 'Table for Five' is a pretty routine affair. Jon Voight brings everything he's got to the show, but the plot simplicities keep the film from being anything unique or special. Not a terrible watch, but not one I'd immediately turn to. Kino Lorber brings the film to Blu-ray with a workable A/V presentation. Extras are trailers for other films. If you're curious about 'Table for Five' give it a rent first. A blind buy may not be worth the price of admission unless you're already a fan.

Sale Price 15.16
List Price 29.95
Buy Now
3rd Party 12.99
In Stock.
See what people are saying about this story or others
See Comments in Forum
Previous Next
Pre-Orders
Tomorrow's latest releases