Melissa McCarthy stars as Michelle Darnell, a titan of industry who is sent to prison for insider trading. After doing her time, Michelle emerges, ready to rebrand herself as America’s latest sweetheart, but not everyone she steamrolled is so quick to forgive and forget. With nowhere to go and no one to scam, Michelle is forced to move in with former assistant Claire (Kristen Bell – Frozen, “House of Lies”) and her young daughter, Rachel. Now at her lowest point, Michelle wastes no time in devising a winner-take-all plan to rebuild her empire. Can she reclaim her status as the No. 1 screwer, or will the love of one family screw her for good?

Since the success of 'Mike & Molly' and her breakthrough role as the self-assured lovable goofball Megan Price in 'Bridesmaids,' Melissa McCarthy seems to have burst onto the silver screen with her feet running, appearing or starring in at least one feature-length movie every year. Aside from the independent drama 'St. Vincent,' each has been met with relatively great returns at the box-office. So, isn't rather ironic that 'The Boss,' a comedy about an insolently self-important titan of industry jailed for insider trading, basically breaks even and might be a sign of McCarthy's bankability starting to wane. Of course, I could be reading too much into this since the wildly hilarious actress has several smash hits under her belt — one with 'Horrible Bosses' director Seth Gordon but most while Paul Feig was at the helm, including their latest collaboration 'Ghostbusters'. However, when joining forces with her husband Ben Falcone, who also produced, directed, and co-wrote this surprisingly aseptic and mean-spirited comedy, McCarthy's success rate is on a downward slump with predictable results.

In 'The Boss,' McCarthy dons suffocatingly hideous turtlenecks which are never explained or ever used as a source of humor or even lead up to some unexpected gag by movie's end. Outside of being an implied quirky character trait, the obscenely garish outfits actually don't provide any particular attribute to McCarthy's savvy business tycoon turned self-help guru Michelle Darnell. Instead, the usually enjoyable comedian appears constricted and uncomfortably restrained by the tight-fitting clothing, barely able to turn her neck and walking awkwardly stiff. On the other hand, the gaudy apparel often accessorized by a shiny piece of jewelry serves as our metaphor for what's going on in this Will Ferrell-Adam McKay production and possibly determine where the filmmakers went horribly wrong. Much like McCarthy's snugly fitted garb, the occasionally funny but more often misfiring comedy is the result of a taut, stilted and very much by-the-numbers script. Although several one-liners muster the requisite guffaw, such as McCarthy and Annie Mumolo's barrage of outrageous insults, the movie is a calculated series of raunchy dark gags that come off as desperate, frantic attempts to shock audiences. 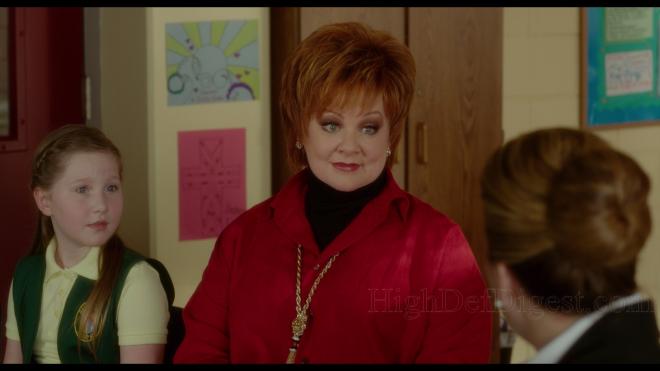 Naturally, the always charismatic McCarthy delivers the wit and genuine appeal with that same sardonic tone and snap timing that has made her the star she is today, providing her relentlessly uncompromising Michelle with an aggressive, hard-as-nails demeanour that hides a tender, gooey side, which reveals itself right on cue. Only, the story leaves little room for McCarthy to breathe and simply let loose on the scene, to just spew whatever random improvised thoughts pop in her head as events happen around her. Whether she's interrupting a Dandelion's troop meeting or goes toe-to-toe with Peter Dinklage's love-spurned business rival Renault, incidents that happen due to Michelle's arrogant exploits largely feel scripted and like a vehicle perfectly tailored to McCarthy's talents, which it obviously is. And for a person that can't curb her potty-mouthed personality around little girls, the former corporate magnate isn't daring enough and refuses to take risks. This is surprising for an R-rated comedy spoofing the Girl Scouts in a jaw-droppingly violent turf brawl of where to sell baked goods that ends with cookies ingested incorrectly.

From the opening moments of 'The Boss', where a young Michelle is returned to her orphanage to the tune of various 1980s pop hits, her journey at redeeming herself is rigidly structured in the most predictable character arc. It's as though we're watching the filmmakers marki a checkbox list of prescribed tropes for breaking apart Michelle's pompous, self-absorbed massive chip on her shoulder. Who better to chisel away at her cheeky, cutthroat cynicism than her disillusioned, down-to-earth personal assistant Claire, played by Kristen Bell with a spunk and gumption that nicely matches McCarthy's. Though Michelle proves herself more an annoyance and disturbance to Claire's single-mother life and her sadly one-dimensional daughter (Ella Anderson), the two women end up exactly where we'd expect them to. As he did in his directorial debut, Ben Falcone demonstrates a journeyman quality in his approach, hitting those prescribed beats at the right time with little to no surprise. This being the second time the married couple have teamed up, and it being a lesser success than the last, perhaps the third feature set to release in 2018 will have them reconsider their tactics towards comedy.

Universal Studios Home Entertainment brings 'The Boss' to Blu-ray as a two-disc combo pack with an UltraViolet Digital Copy code. Housed inside a blue, eco-elite keepcase with a glossy, lightly embossed slipcover, the Region Free, BD50 disc sits comfortably opposite a DVD-9 copy of the film. The Blu-ray includes the 99-minute theatrical version along with an unrated director's cut that clocks in at 105 minutes, adding 6 minutes of raunchy, offensive dialogue and character interactions not seen in theaters. After skipping various trailers, viewers are greeted by a static menu screen with the usual options and music.

Darnells' Darlings break out of their social confines and take on Blu-ray like a boss with a strikingly fabulous, reference quality 1080p/AVC MPEG-4 encode, strutting their stuff with zest and vigor from start to finish.

Shot entirely on the new Arri Alexa 65 camera system that reportedly captures images equivalent to 5-perf 65mm film, the digital-to-digital transfer arrives with stunning razor-sharp details throughout, exposing every wrinkle, pore and blemish in the lifelike facial complexions of every actor. Viewers are even able to tell the difference in the amount of makeup applied on Melissa McCarthy, who's made to look more resplendent and flawlessly glowing, versus Kristen Bell, who appears more tired and overworked. Michelle's garishly elaborate jewelry is striking with plainly marked patterns and figures while the unique stitching and design of her clownishly tacky outfits are distinctly visible with realistic texture in the fabric. Individual bricks on buildings can be discretely counted, the fine lines on leaves and along the bark of trees are plainly visible, and the lettering on the signs outside of Claire's apartment are very well-defined and legible. Only complaint is Universal should have released an Ultra HD Blu-ray edition.

Presented in its original 1.85:1 aspect ratio, the high-def video also delivers one of the brightest and most colorful presentations of recent memory. The screen is continuously awash with a sumptuous array of primary colors, which only seems appropriate for a comedy that carefully walks the line into darker territory. With fiery, energetic reds and vividly glowing blues in every scene while the greens of the surrounding foliage pop off the screen, the entire movie always feels upbeat and animated even during the most emotionally heartfelt conversations. Resplendent secondary hues provide a great deal of warmth and vitality. Spot-on contrast keeps everything sparkling and cheery with crisp, brilliant whites throughout while allowing the tiniest object in the background or the tallest building in the far distance to remain visible. Inky-rich, full-bodied blacks provide the image with an excellent three-dimensional feel and an appreciable cinematic quality, and the smallest details can still be seen in the deepest, darkest portions of the frame. With so many demo-worthy moments to be found, the poorly conceived comedy is at least worth watching for the HD visuals alone.

Very much like the film's main character, the former CEO of her own self-development empire bursts onto the scene with a flashy DTS-HD Master Audio soundtrack. Being a comedy, the front-heavy design won't exactly wow listeners with its flamboyantly tasteless antics, but it nonetheless does a great job in breathing some life into an otherwise humdrum Melissa McCarthy feature.

Occasionally, atmospherics, such as trees rustling in the wind and the noise of a busy city street, occupy the surrounds with amusing effectiveness and great directionality. A genuine highlight is the wacky fight between McCarthy and Peter Dinklage on the roof of Renault's building where wind loudly whooshes all around, and other such minor sequences display fluid panning while Christopher Lennertz's score and accompanying hip-hop songs nicely bleed into the rears, satisfyingly expanding the soundfield. But the lossless mix proves itself a success in the front soundstage where that same music spreads across the screen, creating a spacious and expansive sense of presence that's terrifically engaging. With effects discretely and convincingly moving across all three channels, the mid-range exhibits outstanding clarity and clean separation between the loudest and quietest segments. Meanwhile, vocals remain well-prioritized, delivering McCarthy's every foul-mouthed line with distinction while clearly hearing the gasping breaths of surprised actors. The low-end delivers palpable weight and excellent response in many sequences, most impressively during scenes with bass-heavy music (bass chart).

Starring Melissa McCarthy, Kristen Bell, and Peter Dinklage, 'The Boss' is a poorly-conceived comedy about an insolently self-important titan of industry jailed for insider trading, littered with more gags that fall flat than muster laughs. Unfortunately, it marks the second time McCarthy has teamed up with her husband Ben Falcone and the second time their collaboration has also been met poorly by both critics and audiences even though McCarthy continues to shine as a highlight. The Blu-ray arrives with demo-worthy video and an excellent audio presentation that should make fans very happy. With a decent assortment of supplements to boot, the overall package is worth at least a rental before purchasing.

Sale Price 8.92
Buy Now
3rd Party 1.99
In Stock.
See what people are saying about this story or others
See Comments in Forum
Previous Next
Pre-Orders
Tomorrow's latest releases