When New York attorney Gordon Hocheiser meets Louise Callan, the girl of his dreams, he schemes to eliminate his aging, senile mother, even though he promised his late father that he'd always take care of her. He fears that his batty mom's eccentricities will shortly lead to Louise's departure.

Murder is often the best way to set up a great suspense or mystery flick. Someone wants someone dead, but how are they going to pull it off? How are they going to kill someone without getting in trouble? Or do they even kill the person at all and somehow figure out a way to change their circumstances so the murder isn't necessary? There have been dozens of thrillers and mysteries covering these topics, but how many comedies can you think of? Comedy genius Carl Reiner working from a script by Robert Klane manages to take some sinisterly dark material and turn it into comedic gold.

Life for New York attorney Gordon Hocheiser (George Segal) is an absolute nightmare. He has no life of his own. His career is in shambles. He hasn't dated a woman in years let alone had any kind of a sexual relationship. It isn't because Gordon is a bad guy or anything, he's handsome, smart, and friendly. It's all because he made a promise to his dying father that he has to take care of his batty mother (Ruth Gordon) and the woman has completely taken over his life. Sure his brother Sidney (Ron Leibman) helps out once in awhile, but he lives across town and doesn't go out at night. Gordon has hired nurses to care for his elderly mother, but the woman drives them insane and they never last for long. Everything changes when Louise Callan (Trish Van Devere enters his life. She may be applying for the newly opened nurse position, but it turns out to be love at first sight for both she and Gordon. Now Gordon has to figure out a way to get rid of his mother once and for all or lose his one true love.

'Where's Poppa?' is madcap comedy at its finest. At first, you're not too sure what kind of show this is going to be. It has some silly moments, but then there is also a bleak tone to it all that makes it a hilarious dark comedy. That isn't to say that all of the jokes and gags are winners. Sometimes the pace of the film can get a bit too manic and be just a tad too silly for its own good, but when the film works, you're on your side in fits of laughter. 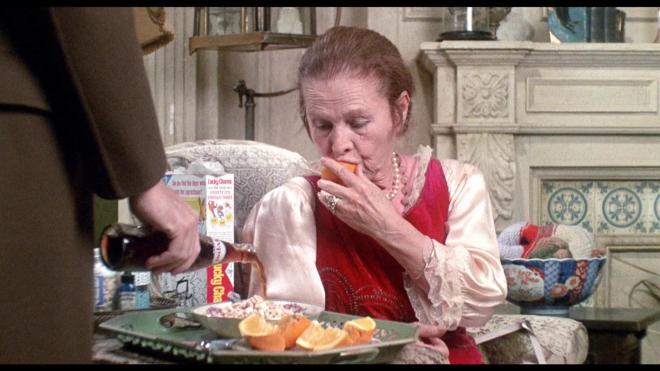 Through it all, the film's success hinges on the great performances from stars George Segal and Ruth Gordon. Considering the state of their characters, it's very easy to feel like the pair have been cooped up in a shabby New York apartment together for far too long. My favorite of the early moments is when Gordon fetches his mom's breakfast even though he's late for a very important court date. Just watching the gag unfold is a demonstration of perfect comedic timing. Just when you think the joke has played, it keeps going and is funny all over again.

Where the film falters just a bit is that at just 82 brief minutes, it runs along awful quickly. Sometimes it can be a bit too much with all of the rapid-fire comedy to get to know some of the side players. Trish Van Devere is great as Louise, but we get so little time to get to know her or why she and Gordon fall for each other beyond plot convenience. Such is also the case for Ron Liebman's Sidney and all of the trouble he gets in running through Central Park and getting accosted by the same group of thugs. It's a running joke that is sometimes funny, but often it doesn't stick the landing.

Taken as a whole, 'Where's Poppa?' is a fun little dark comedy. Murder or the idea of wanting someone dead can really be a good bit of fun, so long as the execution is done right and for the most part, this little movie does a good job of it. It frequently reminded me of 'Throw Momma form the Train' and made me wish there were more dark comedies like this one. Carl Reiner was always a great comedy director and it's great to see something as funny as 'The Jerk,' and 'Dead Men Don't Wear Plaid.'

'Where's Poppa' arrives on Blu-ray courtesy of Kino Lorber and their Studio Classic line. Pressed onto a Region A BD25 disc, the disc is housed in a standard Blu-ray case and opens directly to a static image main menu with traditional navigation options.

With a newly remastered 1.85:1 1080p transfer, 'Where's Poppa' makes a decent leap to HD with this Blu-ray release. Film grain is retained throughout and the image has a nice film-like quality to it. The image can be a bit soft looking at times, but for the most part, details are sharp, facial features, the cramped production design of Gordon's apartment, all look pretty great. Colors are slightly faded looking in places, but otherwise, there is some nice primary pop here and there. Black levels are a little on the softer side, the image can feel a bit bright, but not too blown out. The print sourced for this transfer is in pretty good shape, only mild speckling is apparent and some slight jitter. All around this is a pretty good looking transfer for a film that is closing in on 46 years old.

'Where's Poppa' arrives with a solid little English DTS-HD MA 2.0 track. Dialogue is clearly heard throughout, sound effects have their place and help build a sense of atmosphere to the track. As a repurposed mono track, the mix works, the sense of imaging isn't too defined considering the action pretty much takes place in one room, but what little there is works well for the movie. The only real setback for this track is that there is some audible hiss throughout the run of the film. It's not too overpowering, but during the film's quieter moments it stands out.

Alternate Ending: (HD 5:43) So this is actually a pretty damn funny and extremely dark alternate ending. It fits the tone of the movie, I don't want to say too much about it because it's pretty good. I'd love to see it worked into the film as a viewing option.

'Where's Poppa?' is a delightfully funny dark comedy. It's a bit madcap, it's a bit silly but it works and George Segal and Ruth Gordon are a fantastic pair playing mother and son. Kino Lorber has delivered this movie to Blu-ray in fine order with a decent A/V presentation. Extras are slim, but that alternate ending is pretty good stuff. If you're in the mood for a silly little comedy, 'Where's Poppa?' should fit the bill nicely. At the end of the day, this one is worth a look.

Sale Price 23.39
List Price 29.95
Buy Now
3rd Party 99.99
In Stock.
See what people are saying about this story or others
See Comments in Forum
Previous Next
Pre-Orders
Tomorrow's latest releases