Inspired by true events, Eddie the Eagle is a feel-good story about Michael "Eddie" Edwards (Taron Egerton), an unlikely but courageous British ski-jumper who never stopped believing in himself - even as an entire nation was counting him out. With the help of a rebellious and charismatic coach (played by Hugh Jackman), Eddie takes on the establishment and wins the hearts of sports fans around the world by making an improbable and historic showing at the 1988 Calgary Winter Olympics. From producers of Kingsman: The Secret Service, Eddie the Eagle stars Taron Egerton as Eddie, the loveable underdog with a never say die attitude.

Inspirational sports biopics are a dime a dozen. Hollywood pumps out at least a handful of these films every year. Some are based on more noteworthy popular athletes, others are based on more obscure underdog characters. With only a few exceptions, these films tend to follow a pretty rote course, feature some blatantly made up plot points and offer few surprises by the end. That doesn't mean they're not entertaining mind you. Dexter Fletcher's 'Eddie The Eagle' plays to this melding of factual and fictitious plot points to a T, but still manages to be a heartwarming and entertaining underdog flick.

All Eddie Edwards (Taron Egerton) ever wanted to do was have the chance to compete in the Olympics. The only problem was the fact that Eddie didn't have a lick of natural athletic talent. From track and field to swimming, Eddie tried it all. And failed miserably, often with humorous results. While his mother Janette (Jo Hartley) and his father Terry (Keith Allen) supported their son's efforts, deep down they wanted him to accept his averageness and take up a trade and focus his life. But little Eddie couldn't be stopped. When he couldn't prove himself on the field, he took to the slopes with an eye for the 1988 Winter Olympic Games to be held in Calgary, Canada.

When Eddie fails to make the cut to represent the U.K. in the games, Eddie gets a bright idea. For over fifty years, the United Kingdom hasn't fielded an athlete in the sport of ski jumping. Without any competition of any kind, all Eddie has to do is make a single competitive jump and he's in the games! When the U.K. Olympic Committee headed by Dustin Target (Tim McInnerny) makes a last-minute change to the rules to keep a "joke" like Eddie out of the games, Eddie has to prove himself all over again. With one last chance to make the games, Eddie turns to former hotshot jumper turned drunk Bronson Peary (Hugh Jackman) to coach him. Even if Eddie makes the minimum jump distance requirements to join the team in Calgary, he's going to have to face an even bigger and potentially lethal challenge, the 90-meter jump. 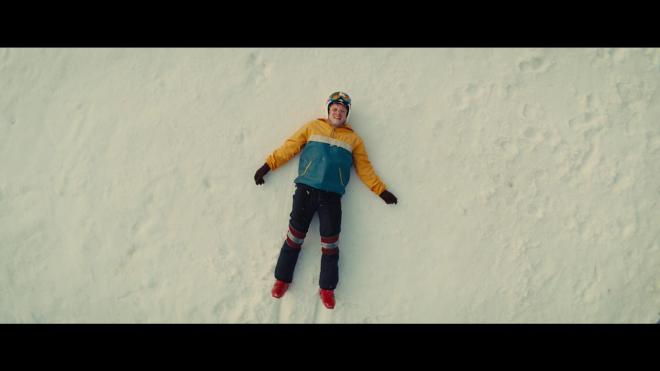 Films like 'Eddie The Eagle' aren't exactly "Google Friendly." While Eddie Edwards was a real man and he did go to the Olympic games in 1988 for ski jumping when the U.K. hadn't fielded an athlete in the sport for decades, the accuracy of the film pretty much ends there. One simple search of Eddie Edwards reveals that about 90% of this film is made up. If you're going into this film expecting accuracy and a true-to-life retelling of historical events, 'Eddie The Eagle' isn't the film you're looking for. That said, if you're after some old-school inspirational sports comedy fun in the lines of 'Cool Runnings,' then you should have a great time with 'Eddie The Eagle.' It should also be noted that the same Jamaican bobsled team of 'Cool Runnings' competed at the same 1988 winter games in Calgary as Eddie Edwards!

While the accuracy of the film is questionable, what isn't questionable is how much fun this movie is. It may not be accurate, but this movie has an infectious heart and spirit. The story of a kid who was told he couldn't do what he wanted to do and struggles to find his way and triumph is relatable to just about anyone who sits down to watch it. It's hard not to love the underdog and Eddie Edwards is most certainly an underdog. Sure the man may seem delusional, but you have to respect anyone who straps on their skis and keeps trying, even when they break bones and on more than one occasion risk breaking their neck. It's the heart of the character you're supposed to fall in love with, not the plot details.

At the center of this little opus is Taron Egerton as Eddie Edwards. Egerton delivers a fantastic performance, and if you were to search any clips of the real Eddie Edwards, it's easy to see that the actor went the extra mile to nail all of his mannerisms. He makes for a lovable nerdy lead character and those thick Coke bottle glasses make him endearing. It doesn't take long for you to accept him, his crazy ideas, and want him to succeed and a lot of that has to do with Egerton's presentation. Oddly enough, it's Hugh Jackman's Bronson Peary that drags a lot of this movie down. Aside from the fictitious nature of the character, Jackman's Peary just isn't a relevant character. He's there for some bit of fun, but it feels like Jackman just being Jackman. The differences between his character here and his turn as Charlie Kenton in 'Real Steel' are negligible. They're virtually the same person. It also doesn't help that Peary is saddled with his own backstory baggage involving a past spat with his own ski jumping coach played by Christopher Walken. This side story is trite and unnecessary as is Walken's involvement in this film. All that side plot does it pull focus away from Eddie, which is a shame because I think had the movie dropped a lot of this dead weight it would have been a leaner and better film.

It may not be the greatest film ever made, not by a long shot, but 'Eddie The Eagle' proves to be a fun bit of escapism. It may be difficult to not investigate the full story and hold this film against its inaccuracies, but if you can do that, you should have a good time. If you can turn off your brain and just enjoy the movie for what it is, 'Eddie The Eagle' proves to be some decent family-friendly entertainment. Sure, you could probably find a better movie to fit that particular bill, but if you find yourself in front of this film I'd wager it won't be long before you start smiling and hoping that Eddie sticks the landing on his next jump.

'Eddie The Eagle' arrives on Blu-ray thanks to 20th Century Fox. Pressed onto a Region A BD50 disc, the disc comes with a DVD and a Digital HD voucher. Housed in a two-disc eco-friendly case with an identical slip cover, the disc opens to trailers for other 20th Century Fox releases before arriving at an animated main menu with traditional navigation options.

'Eddie The Eagle' enjoys a beautiful digitally sourced 2.39:1 108op transfer. Detail is abundant throughout the entire run of the film. From Eddie's patchy facial hair and Coke-bottle glasses to the period costuming to the ski slopes, everything is on the screen. Colors tend to skew towards the warmer golden tones, and at times can throw off the flesh tones a bit. There are a few scenes where it looks like this color grading was done in post, so some of the cast can look a little jaundiced. Black levels and shadows are inky and well defined providing plenty of depth to the image without any contrast issues to speak of. Where the image can falter is when some very obvious CGI creeps in during some of the jump sequences. The effects are notably softer looking and the image tends to flatten - especially during one sequence where Hugh Jackman's character does a jump drunk. Free of any compression issues, this is a very strong, pleasing looking image that suits the upbeat colorful nature of the film.

'Eddie The Eagle' arrives with a wonderfully immersive DTS-HD MA 7.1 audio mix. This was originally shown theatrically in Dolby Atmos which is apparently being saved for the 4k UHD disc release. Even as a 7.1 mix, this is an effective and enjoyable audio track. The period 80s tunes and the synth score is a ton of fun. Dialogue comes through with crystal clarity and largely keeps front and center. The surround channels are present but subdued for most of the film, but whenever Eddie takes a jump, that's when the surrounds come to life. The rushing winds, the crowds, Eddie's screams of terror, all of these elements come together to create an exciting experience. For such a simple film, this level of activity is a lot of fun and incredibly entertaining to hear. You're going to want to have your system cranked just for these moments. There is a ton of LFE activity as the winds thunder around Eddie on his downward runs. I felt like I should turn things down just for the sake of my neighbors, but I didn't, I was having too much fun! Free of any other issues, this is a dynamite audio mix.

Let The Games Begin: Soaring with 'Eddie The Eagle': (HD 46:43) made up of segments 'All or Nothing: The Hero's Heart,' 'An Unlikely Friendship: Eddie & Peary,' 'Attitude is Altitude: Filming The Ski Jumps.' This is mostly just your standard EPK material with cast and crew interviews, but there is actually quite a bit of great material in these segments about the making of the film, shooting the jumps, and bringing the 1988 games to life. They also go into some detail about the need to create some relatable fictional characters to make this story work as a film versus being completely accurate to real life.

Gallery: (HD 5:43) This is a collection of stills that can be scrolled through manually or through auto advance functions.

'Eddie The Eagle' may not be the world's greatest biopic, but it's still incredibly heartwarming and entertaining. If you're able to set aside the fictionalized elements and just enjoy the film for what it is, you and your family should have a good time with this little film. Again, not amazing, but a heck of a lot of fun. 20th Century Fox delivers 'Eddie The Eagle' with a heck of an A/V presentation, in particular, that audio track provides a lot of the fun. Extras are a bit slim but still some worthwhile material. At the end of the day, 'Eddie The Eagle' is worth a look.

Sale Price 7
List Price 14.99
Buy Now
3rd Party 3.13
In Stock.
See what people are saying about this story or others
See Comments in Forum
Previous Next
Pre-Orders
Tomorrow's latest releases