Aliens, contacting scientist Adam Penner, inform him that they have been on the moon for twenty thousand years, undetected due to their invisibility, and have now decided to annihilate humanity unless all the nations of earth surrender immediately. Sequestered in an impregnable laboratory trying to find the aliens' weakness, Penner, his daughter, a no-nonsense army major and a squeamish scientist are attacked from outside by the aliens, who have occupied the bodies of the recently deceased... Starring John Agar, John Carradine, Jean Byron, Philip Tonge, and Robert Hutton

There's something about the giddy exuberance of 1950s era drive-in science fiction that is absolutely infectious to watch. Perhaps it was their tendency to go big with their themes about nuclear annihilation? Perhaps it has something to do with the convoy of recognizable faces and names who somehow routinely turn up in films of this sort? Maybe it's the no-budget, no-frills production values that force the cast to play a big game of pretend in front of the camera? Perhaps it's all of these qualities working together that make so many 1950s science fiction adventures so much fun to watch? 1959's 'Invisible Invaders' starring John Agar and John Carradine and directed by Edward L. Cahn is a riot of 1950s science fiction cheese, and features all of the best qualities of a low-budget production.

Man has moved beyond the discovery and explosion of the atom and now sets his sights on the cosmos. With interstellar space travel on the horizon, man's ambitions know no limits. That is, of course, until we learn we are no longer alone and that an ancient advanced race of alien beings has been living on the moon all along. For centuries, this alien race has watched us, studied us, and had deemed us a primitive species. Now that we have completed our first efforts towards exploiting the resources of outer space, this powerful alien race has decided humanity is a threat and must be put in check.

By using the body of the recently deceased scientist, Dr. Karl Noymann (John Carradine), one of the aliens issues a warning to the brilliant atomic scientist Dr. John Penner (Philip Tonge), convince the nations of the world of the existence of a powerful invisible alien race living on the moon, disarm all nuclear weapons, or face the annihilation of all humanity. While Dr. Penner's daughter Phyllis (Jean Byron) is convinced of her father's sincerity, others like Dr. Lamont (Robert Hutton) and the rest of the world leaders think the once esteemed atomic scientist has cracked up. 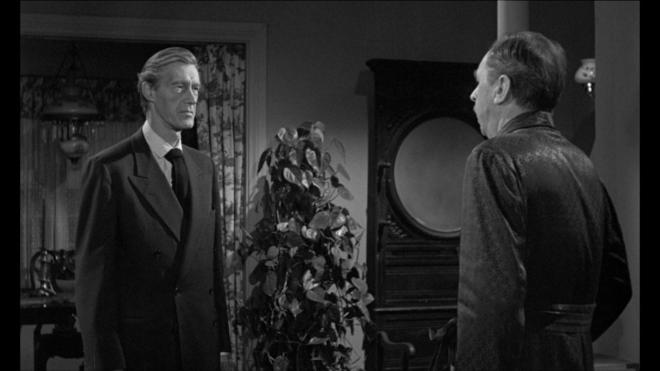 When the alien invasion begins and these invisible visitors take over the bodies of the recently dead and start to take over the world, Dr. Penner is proven right and may be the last hope for humanity. With the help of Major Bruce Jay (John Agar), Dr. Penner, Dr. Lamont, and Phyllis escape to a nearby underground bunker. As an army of dead men and women mass outside, the scientists and Major Jay have only a few hours to find a way to defeat the invisible invaders or bare witness to the destruction of all mankind.

If you're an astute connoisseur of 1950s era drive-in science fiction B-movie fodder, the plot of 'Invisible Invaders' may sound a tad familiar. Follow my little rabbit hole for just a moment if you will. An alien army takes over the bodies of the recently dead to force Earth to surrender because of their destructive tendencies and their risk to neighboring planets or face annihilation. If this plot sounds familiar, it's because, through some clandestine happenstance, it's virtually the same plot as 1959's Ed Wood directed classic 'Plan 9 From Outer Space!' Complete with baritone voiceover to cover exposition, a parade of ill-fitting stock footage, and some genuinely hammy visual effects, 'Invisible Invaders' and 'Plan 9 From Outer Space' bare more than a little resemblance to each other. Amazingly enough, the two films were released hardly two months apart, meaning that two writers, Ed Wood for 'Plan 9' and Samuel Newman for 'Invisible Invaders,' somehow concocted the same goofy idea at about the same time and both films got funded, cast, produced, and made their way to theater screens! As one watches this film it's hard not to keep some of Ed Wood's campy dialogue out of "Your stupid minds! Stupid! Stupid!" 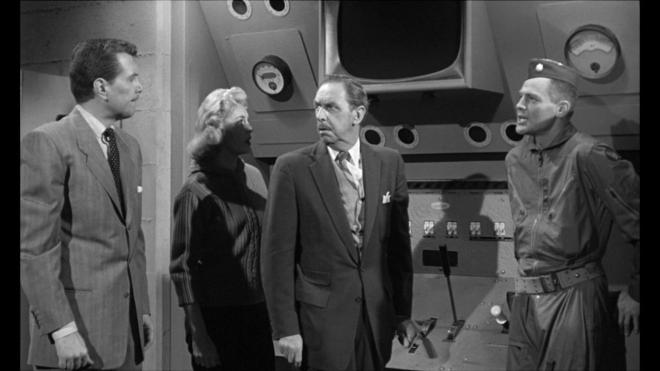 Even with the backing of Universal Artists, 'Invisible Invaders' is about as cheap as it can get without stooping to full Ed Wood levels. In addition to cardboard sets and poorly fitting stock footage, the film features genre legend, John Agar. Agar was once a regular in John Wayne western and WWII epics, but by this time the actor had drifted towards making sci-fi camp for Universal International. Even though he's top billed, the man doesn't even show up in the film until the middle of the second act. Even with the lack of screen time, Agar is in his element hamming up every scene as if his life depended on it. Like Agar, John Carradine is always a delight to see on screen. As the actor who never said "no" to a part, he still manages to bring the flick a level of respectability. Rounding out the cast with Jean Byron, Robert Hutton, and Philip Tonge, the thin group of actors try to do what they can with cardboard sets, reacting to stock footage, and cheap camera tricks to help the audience believe the end of the world is nigh. The results don't always work as intended, but it's still a lot of fun to seem them work together.

Strictly speaking, 'Invisible Invaders' really isn't a "good" film. It's hammy, it's coated in canned Cheez Wiz, and a lot of the story mechanics can induce a fair bit of laughter. But that's the fun of it. Part of why I love 1950s science fiction was that it was this sort of cheesy mess of cliches and low-budget nonsense. Even without the means to produce a quality-looking flick, these movies still provide endless hours of entertainment value - even if for all the wrong reasons. Don't be surprised if you start riffing on this one as you watch it unfold. To that end, you may need to invite a good-sized group of friends over. With a good pizza and the right beer in the mix, you'd have a solid double feature with 'Plan 9 From Outer Space' and 'Invisible Invaders!'

'Invisible Invaders' arrives on Blu-ray courtesy of Kino Lorber and their Studio Classics line. Pressed onto a Region A BD25 disc, the disc is housed in a standard Blu-ray case. The disc opens directly to a static image main menu with traditional navigation options.

The packaging for this Blu-ray release of 'Invisible Invaders' states that its 1.66:1 image has been given a new 1080p remaster. At first glance, you might have a tough time spotting the upgrade. This is a very low-budget flick and the cheapness comes through in every frame. There is a notable layer of fine film grain present, but the film as a whole appeared to have been shot in a soft focus, perhaps in an effort to hide certain cheaply produced features? Really the amount of detail only ever comes through in close-ups of the cast and the impressive alien/zombie makeup work. A few wide shots look generally pretty good but as I said, it's still pretty soft looking. The print sourced for this master is in pretty decent shape, some small bursts of speckling here and there and the inconsistent stock footage is about the worst of it. Black levels and shadows work well as the greyscale is in stable shape, but the image can look a bit flat in a number of scenes, especially if there are any process shots or optical effects at work. All around this is still a very good-looking image for a film that's going on 60 years old.

'Invisible Invaders' comes with a pretty effective English DTS-HD MA 2.0 audio mix. The film relies on a lot of dialogue and voice-over work to keep it moving. To that effect, the dialogue comes in crystal clear without any interference from the 50s era sci-fi sound effects or the sometimes blaring score by Paul Dunlap. Sound effects and atmospherics do provide a decent sense of space and dimension to any given scene, but some slight age-related hiss and a couple pops keep this effect on the muted side of things. Levels are nice and even, you shouldn't have to adjust anything once the main invasion gets going or when the film segues to the underground bunker set. This is actually a pretty decent audio track considering the extremely low-budget nature of its production.

Audio Commentary: Film historians Tom Weaver and Dr. Robert J. Kiss give 'Invisible Invaders' a thorough going over. Because they're only providing anecdotal information, the commentary can be a bit too formal sounding at times, but there is a wealth of information to be gleaned from this track. Absolutely worth the listen.

At a swift 67 minutes, 'Invisible Invaders' is a ton of fun. It features genre favorites like John Agar and John Carradine and has a plot that is strikingly familiar to 'Plan 9 From Outer Space' only a slightly better film! I had a blast with this flick all the way through and those who appreciate 1950s sci-fi camp should have a great time with it. Kino Lorber brings the film to Blu-ray with a pretty decent A/V presentation. Age is a factor but for its budget, this doesn't look or sound half bad! Extra features are pretty slim, but the audio commentary is worth a listen. Just for how much fun I had watching this movie, I'm left to call 'Invisible Invaders' on Blu-ray as recommended. I can see a lot of people enjoying this one!

Sale Price 21.75
List Price 29.95
Buy Now
3rd Party 39.88
In Stock.
See what people are saying about this story or others
See Comments in Forum
Previous Next
Pre-Orders
Tomorrow's latest releases