A series of murders take place in a remote European village which the locals believe to be the work of vampires and which the police dismiss as nonsense. The murders coincide with the arrival of the beautiful Luisa Karlstein (Britt Nichols) who has been summoned by the imminent death of her mother, Baroness Karlstein, who tells her daughter the family secret, that they are all vampires!

I sometimes wonder how many horror fans also mistake Jesús Franco's 'Daughter of Dracula' for Lambert Hillyer's 'Dracula's Daughter,' the awesome 1936 sequel to Tod Browning's 'Dracula.' Or, maybe some even think this might possibly be a pseudo-remake of the classic Universal monsters flick. And I don't mean confusing the actual movie and story, but mistaking the lesser for the superior because of the title. The story here, which Franco wrote, follows a young woman (Britt Nichols) discovering her family's curse involves an unquenchable thirst for human blood. And apparently, that thirst also turns her into a voyeur and gives rise to sexual urges only other beautiful, voluptuous women can satisfy. Prepare for lots of nudity, extreme close-ups of various body parts, and long sequences of naked wrestling on the bed. Basically, this is NSFW material and should only be watched after the kids are put to sleep. In other words, a typical evening with Franco, the king of Euro-horror sleaze.

I would hope no one would ever confuse this for Hillyer's far superior vampire tale about wanting to be free of the undead. But, man, every time I read that title, my mind immediately jumps to that awesome sequel, and I have to wonder if that might have been part of Franco's intention when he wrote this script. Especially since he was inspired by other sources when creating this low-budget Z-movie, I wouldn't put it past him. After seeing a few too many Hammer Films, particularly 'The Vampire Lovers' considering this movie's plot, Franco wanted to make his own atmospheric Gothic romance about bloodlust. Set mostly in and around a family estate that was furnished by someone with an eye only for Victorian furniture, the baroque house is awash in heavy shadows, engrossed by an eerie feeling of death, and haunted by a mysterious past connected to a string of murders in the present. If there is anything worth admiring in this production, it is Franco making great use of José Climent's photography and camerawork. 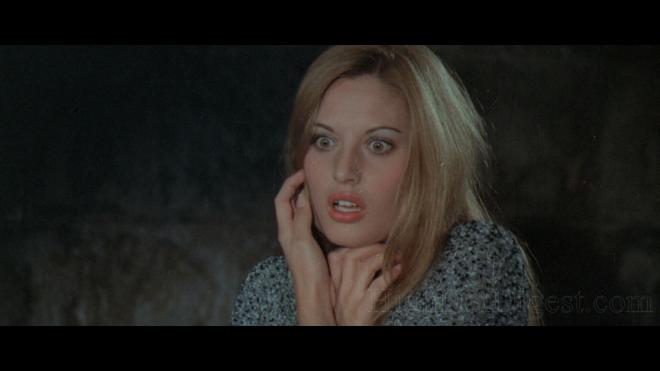 However — or should I say, as would be expected — Franco lets the possibilities go to waste, not that the cinematography was masterful in the first place. Just well done. Throughout, he overuses the camera zoom at the oddest, if not inappropriate, moments, such as when we first meet the inspector (Alberto Dalbés) in charge of solving the murder case talking to a nosy reporter (Fernando Bilbao). I must admit, though, it's pretty funny to watch because it's clear Franco has no clue how to establish a tensely dramatic scene. He just knows that good director's use the zoom, except the reason for it completely escapes him. And seeing as how the Spanish-born filmmaker takes inspiration from Sheridan Le Fanu's Carmilla for his script, there are many opportunities for drama with plenty of room for sensuality. He changes the names of the characters — bending copyright laws every so slightly — and various other plot details, but the Gothic novella's fingertips are all over the place!

In 'Daughter of Dracula' (originally titled 'La fille de Dracula'), Nichols plays Luisa Karlstein, who learns from her dying grandmother that she's a direct descendant of Dracula (Howard Vernon). Whose body still remains entombed in the family crypt! The original character's name is Karnstein, which demonstrates just how much thought Franco put into this, but the whole Dracula angle is taken from Hillyer's classic film. The object of bloodlust was also changed from lovely young stranger to Luisa's cousin (Anne Libert), upping the game from simple homoeroticism in Le Fanu's book to the ultimate carnal sin of an incestual love affair. Given the rest of his canon, a myriad of graphic horror eroticism and sexual depravity, Franco even outdoes Franco here. And is customary in most of his films, the director also makes an appearance Cyril Jefferson, a mysterious expert of the occult, and it's funny watching him spew ridiculous lines about the supernatural with deadpan seriousness. In spite of any possible confusion, 'Daughter of Dracula' is still a hoot because of how laughable the whole production ultimately is.

Kino Lorber brings Jesús Franco's 'Daughter of Dracula' to Blu-ray under the distributor's "Redemption" label. Housed inside a normal blue keepcase, the Region A locked, BD50 disc goes straight to a static menu screen with music playing in the background.

Much like other Jesús Franco sleaze flicks on Blu-ray, this movie arrives with an as-is transfer, awash in white specks, mild discoloration and vertical scratches, some more severe than others. However, the mostly good yet unspectacular 1080p/AVC MPEG-4 encode shows that the source has aged reasonably well, though it could greatly benefit from a full restoration.

Originally shot on the inexpensive 35mm 2-perf Techniscope stock, which bathes the 2.35:1 image with a very thin layer of natural grain, contrast is decently well-balanced with lots of clean, brilliant whites throughout. On the other hand, highlights tend to bloom noticeably, especially in scenes where the sun shines brightly through windows. Black levels are strong and accurately rendered on the whole with good visibility of the finer objects in the background. Colors benefit the most from the jump to HD, displaying lots of nicely saturated primaries and bold secondary hues. The video comes with surprisingly good clarity and definition in the clothing, furniture and the house while healthy-looking facial complexion are revealing. And in spite of several blurry, poorly resolved scenes, the high-def presentation looks pretty good.

Showing some good along with the bad, the uncompressed PCM mono soundtrack suffers from a similar dire situation as the video, neither completely terrible nor particularly worthwhile.

Nevertheless, imaging arrives with a surprisingly excellent sense of presence and weight. The soundstage is decently wide, all things considered, with good acoustical detailing, satisfying fidelity and lots of audible background activity. However, with it maintained in the center of the screen from beginning to end, the mid-range also feels limited as the upper frequencies expose a bit of distortion and brightness in a few sequences. Overall, vocals are intelligible and well-prioritized, though the poor ADR work can be somewhat distracting. Sadly, there's very little low bass to speak of, and most of the movie is accompanied with noticeable hissing and a tad of noise, making the lossless mix passable but mostly average.

As a side and unfortunate note, the subtitles are not CIH friendly, so some minor adjustments will have to be made for those with the capability to enjoy the film as it was intended.

Sale Price 17.99
List Price 29.95
Buy Now
3rd Party 20.19
In Stock.
See what people are saying about this story or others
See Comments in Forum
Previous Next
Pre-Orders
Tomorrow's latest releases