The ocean contains the history of all humanity. The sea holds the voices of the Earth and those that come from outer space. Water receives impetus from the stars and transmits it to living creatures. Water, the longest border in Chile, also holds the secret of a mysterious button that was discovered in its seabed. Chile, with its 2,670 miles of coastline, the largest archipelago in the world, presents a supernatural landscape. In it are volcanoes, mountains and glaciers. In it are the voices of the Patagonian indigenous people, of the first English sailors and also those of its political prisoners. Some say that water has memory. This film shows that it also has a voice.

A good documentary offers a window into a world or a subject matter that the audience will likely know little to nothing about. Ideally, this will come unfiltered through the lens of an impartial observer, but every now and again a little personal bias can work to the piece's advantage. Such conditions are the case for documentarian Patricio Guzmán's latest effort 'The Pearl Button.' While I have traveled a lot of the world and seen many amazing things and cultures, I have never made it to South America and I knew next to nothing about Chile or the political oppression and mass murders that gripped the country for decades. 'The Pearl Button' uses the unique focus of the country's vast coastline and the country's unique relationship to water to chart a historical trajectory that connects the violent Pinochet dictatorship all the way back to 19th-century English explorers.

There is a lyrical beauty to this documentary that at times makes you feel like you're watching a visual poem matched with some incredibly powerful nature photography. Chile is a beautiful country filled with mountains and inlets that rise up out of the water creating a chain of thousands of tiny islands. It's an incredible sight to see on its own, and then it becomes emotionally crushing to learn that within these waters rest the bodies of untold numbers of political dissidents who were executed during Pinochet's 17-year reign of power.

It is through this marriage of natural beauty and human horror that 'The Pearl Button' masters its true raw power. The film works to educate without pandering to an audience while at the same time it doesn't shy away from showcasing tough historic material. Part of where this material grounds its moral compass is with the story of Jemmy Button. Button was a native Chilean man who in 1830 was bought by the British Navy for a single pearl button that one of the officers happened to be wearing. It's a tragic story that sets the groundwork for the rest of Guzmán's tale of strife and loss. It can be a bit of a punch to the gut at times, but the film plays more like a journey that takes the time to appreciate the good along with the bad. 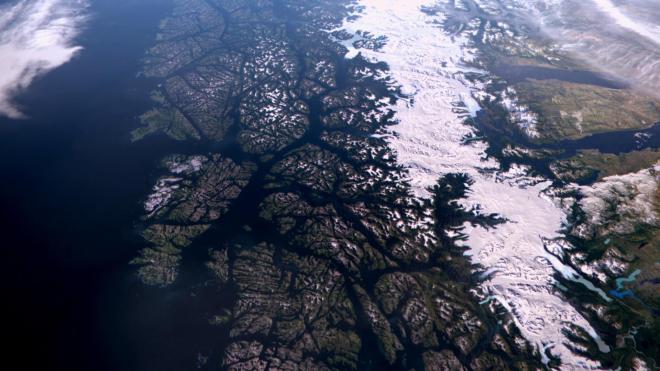 Where 'The Pearl Button' can falter is that it can feel more than a little unfocused in places. It's almost as if Guzmán was more interested in how he was telling the story rather than what he was actually saying. I haven't seen his 2010 documentary 'Nostalgia for Light' so I have no basis for comparison if this is the director's usual stylings or not. That said, I feel that 'The Pearl Button' can be an incredibly engrossing and magnetic film. The best equivalency that I can come up with is that it is like watching a documentary directed by Terrence Malick. Where this can be a bit too artistic at times, you can forgive these moments because the film as a whole possess that lyrical beauty that I mentioned previously.

At the end of the day, 'The Pearl Button' accomplishes what I look for most in a documentary - to educate me in a way where I don't feel pandered to. I loath documentaries that maintain an overt agenda, and while I can't deny that 'The Pearl Button' is clean of this, this film is far more focused on telling a story within a historical context rather than empirically stating something is good or bad. 'The Pearl Button' is a film that feels more like a celebration of beauty and ugly, good and evil that one can't live without the other, but the good and beautiful is the side to strive for. It's a fascinating film and one I would recommend most people to give a chance.

'The Pearl Button' arrives on Blu-ray thanks to Kino Lorber. Pressed onto a Region A Locked BD50 disc, the disc is housed in a standard Blu-ray case and opens to a static image main menu featuring standard navigation options. Also included in this set is a booklet containing an essay by Eric Hynes.

With a 1.78:1 1080p presentation, this Blu-ray release of 'The Pearl Button' makes the most of its digital photography. Detail is strong and vibrant as the image showcases some incredible nature shots interspersed with interview footage. Facial features are strong as are the natural textures of the outside scenery. Colors are bold and beautiful throughout featuring plenty of primary pop. Colors are most effective during the nature shots, but the interview subjects display a natural flesh tone. Black levels are strong with plenty of shadow separation creating a strong sense of depth to the image without any crush issues. The only anomaly worth mentioning is some slight banding that can crop up here and there, but it's nothing so serious as to knock this otherwise beautiful transfer for.

For a quiet and somber film, 'The Pearl Button' features a rather impressive Spanish DTS-5.1 surround mix wth English subtitles. During the nature scenes that include aerial shots and some shots from outer space feature a magnificent sense of space and atmosphere. As most of the track is made up of narration and interview dialogue, it's never difficult to hear what is being said as dialogue occupies the front/center channels. Sound effects are relatively sparse considering the nature of the film, but are readily audible during the nature shots and can make the viewer feel immersed in the scene. It's a nice effect and makes this audio track a far more interesting experience than the average documentary.

The Limitless Longing of Patricio Guzmán's 'The Pearl Button': This essay by Eric Hynes is a wonderful companion piece to the film and provides a very thoughtful analysis of the film and its poetic themes.

Encounters: (HD 35:05) This is a selection of bonus material that features deleted and extended interview segments that simply didn't fit within the film itself but was very informative and interesting material none the less. Worth a watch immediately after watching the main film.

'The Pearl Button' explores nature's beauty juxtaposed against some truly horrific human atrocities. It's a fascinating and challenging documentary that proves to be incredibly informative about the past while being contemplative about what the future can bring. Kino Lorber has brought the film to Blu-ray in fine order featuring a fantastic A/V presentation with some interesting deleted material serving as a secondary companion piece to the main film. Recommended.

Sale Price 17.49
List Price 34.95
Buy Now
3rd Party 22.62
In Stock.
See what people are saying about this story or others
See Comments in Forum
Previous Next
Pre-Orders
Tomorrow's latest releases