Life in the small town of Grandview, Illinois is one that is just like any other city or town. Tim Pearson, soon to be graduating high school wants to go to Florida to study oceanography. He meets Michelle "Mike" Cody and is attracted to her. She runs the local Demolition Derby place. Ernie "Slam" Webster is on of the drivers in the derby who's wife is cheating on him and wants to later on be with Mike. Tim falls for Mike and a big love triangle is about to happen.

Have you ever plugged in a movie where very early on you can see what the filmmakers are trying to do, but know deep down that the final product won't line up? It's as if the filmmakers tried to smash together too many genres to make their little story look and sound unique, but it never manages to nail the signature tropes of any genre at all and ultimately becomes nothing much of anything. This is the case of Randal Kleiser's 1984 comedy/drama 'Grandview U.S.A.' At its core, this film is a little coming of age story but it becomes a bloated mess with all of the other material tossed on top of it.

Tim Pearson (C. Thomas Howell) dreams of swimming with the fishes. Not in the sense that he wants to be bumped off by the mob, he just wants to become an oceanographer. You can't blame the kid since he lives in landlocked Grandview, Illinois and is thousands of miles from the ocean. As he's about to graduate high school, Tim wants to stand up to his overbearing realtor father and tell him he doesn't want to go into the family business. Every time he tries to find the words, he can't get them out. However, everything changes the day Tim meets Mike Cody (Jamie Lee Curtis). Mike owns the local dirt tracker demolition derby and she's going head to head with Tim's father to keep her business. Tim's father wants to build a resort, but Mike wants to keep her father's legacy alive and breathing. As Tim starts to fall for Mike, Mike's heart drifts towards her driver Slam Webster (Patrick Swayze) who is dealing with marital troubles due to his cheating wife Candy (Jennifer Jason Leigh). Life in Grandview is never going to be the same after this wild and crazy summer.

Prior to directing 'Grandview U.S.A.,' Randal Kleiser had brought the world 'Grease,' 'The Blue Lagoon,' and 'Summer Lovers.' Aside from the song and dance numbers found within 'Grease,' these three films follow a familiar "coming of age" pathway - although in a more sexual nature than what he attempted with 'Grandview U.S.A.' Perhaps 'Grandview U.S.A' could have used some sexual angst, because the film struggles with its characters' motivations for even existing, let alone their motivations for interacting with each other. As the film plods along introducing the various major players and their circumstances, the audience frequently has to figure out who and what this film is actually about. Is this a coming of age character drama? Is this a town drama about the little people uniting against the greed of a single individual? Is this about a teenage boy's sexual desires coming alive after meeting an older woman? At any given time, 'Grandview U.S.A.' is all of these things and none of them. 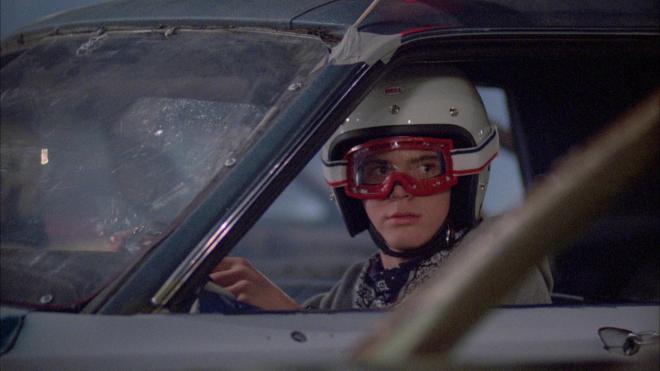 Perhaps one of the best ways to describe 'Grandview U.S.A.' and why it ultimately doesn't work is because at its core it is 'The Last Picture Show' meets 'Ski School' only it doesn't capture either film's essence. It's about a stagnated town that is ultimately controlled by one man who can't purchase his dreams into reality so he's forcing his son to live them. That's story one. Story two is about a small town girl in the form of Curtis' Mike and a small town boy Patrick Swayze falling in love even though the situation is a bit complicated - although it isn't complicated at all. Put those stories together and make them compete against one another and you have 'Grandview U.S.A.' The biggest issue facing 'Grandview U.S.A.' is that none of the plot elements are all that dramatic on their own. There aren't really any life-altering stakes enough to care about these people and what they're going though.

I wanted to like 'Grandview U.S.A.,' I really did. 'The Blue Lagoon' offers some entertainment value, 'Summer Lovers' was a pretty decent coming of age drama, and 'Grease' is a classic - so I had hopes for 'Grandview U.S.A.' This movie is just a stagnate mess of plots without a direction to go in. Perhaps that was done on purpose thematically since the town of Grandview, Illinois isn't going anywhere in the film, but it doesn't make for a dramatically interesting story to follow. The cast is trying, you can see them struggle to make the material interesting and relevant. At least C. Thomas Howell and Patrick Swayze got to do 'Red Dawn' after this and Jamie Lee Curtis got to do 'The Adventures of Buckaroo Banzai Across the 8th Dimension.' I genuinely try to find something worthwhile in every movie I see. I don't like to feel like I ever wasted my time with a film, but in all honesty, 'Grandview U.S.A.' isn't memorable and not one I would be quick to recommend to people.

'Grandview U.S.A.' arrives on Blu-ray courtesy of Kino Lorber and their Studio Classics label. Pressed onto a Region A BD25 disc, the disc comes housed in a standard Blu-ray case. The disc opens directly to a static image main menu with traditional navigation options.

'Grandview U.S.A.' arrives on Blu-ray with a pleasing, newly remastered 1.78:1 1080p image. Film grain is present but stable without any noise issues. Detail levels are strong throughout. There are a couple of dream sequences designed to look like music videos of the era and some details soften with colors keyed up a few notches, but that's by intent. Colors are bright, bold and life-like with plenty of primary pop. Flesh tones look natural and healthy without people appearing too pink or too pale. Black levels are equally impressive providing deep inky blacks that give the image a nice three-dimensional aspect to it. All around, this is a pretty great looking transfer.

'Grandview U.S.A.' comes packed with an English DTS-HD MA 2.0 audio track. For what amounts to a mostly quiet and calm conversational film, this mix does a great job of providing a constant sense of space and atmosphere. Whether the scene takes place in a big open outdoor demolition derby or a tight and confined hallway, the mix always sounds natural. Imaging is pretty decent as the mix provides a sense of direction - especially during the demolition derby moments. Also included in this disc is an English DTS-HD 5.1 that pretty much sounds exactly like the 2.0 mix with only a little more of a surround effect applied. The previously mentioned demolition derby scenes and the music video dream sequences get a little bit of an uptick in the surround department, but nothing too notable. It's mostly a standard stereo mix with a little bit of extra space applied to the surrounds. Either track will get the job done, and both sound pretty excellent.

'Grandview U.S.A.' is one of those innocuous movies that you can take it or leave. It's nothing amazing, but it also isn't the worst thing either. I imagine if I'd been channel surfing and came across it I would have gotten some entertainment value out of it, but it isn't one that I would want to actively seek out and watch on my own. Kino Lorber brings the film to Blu-ray in great order with a solid A/V presentation that should please fans. No extra features exist. At the end of the day, I'm left to call this one a rental. It just didn't do it for me, so if you're at all curious, try before you buy.

Sale Price 15.39
List Price 29.95
Buy Now
3rd Party 15.39
In Stock.
See what people are saying about this story or others
See Comments in Forum
Previous Next
Pre-Orders
Tomorrow's latest releases