Megalomaniac and would-be world dominator Roxor has kidnapped Robert Regent, along with his death ray invention, in hopes of using it to degenerate humanity into mindless brutes, leaving himself as Earth's supreme intelligence. Faced with revealing the machine's secrets or allowing his family to die a horrible death at the hands of Roxor, Regent's only hope lies with the intervention of his brother-in-law, the beturbaned yogi and magician Chandu, who has the power to make men see what is not there 'even unto a gathering of twelve times twelve'...

Classic movies can be a real joy to discover. Because of their age, they often get pushed to the sidelines in favor of newer releases or to make way for more popular films. Even if the film offers an appearance of a legendary star of the stage and screen, it can still become overshadowed during its release and ultimately forgotten. That's where home video is so important. It gives people the chance to rediscover these lost gems and enjoy a unique experience while other people are at the multiplex digesting the latest blockbuster offering. Such is the case of 1932's 'Chandu the Magician.' Directed by William Cameron Menzies and Marcel Varnel and starring Edmund Lowe and Bela Lugosi, this adaptation of the radio show brings all of the pulpy fun to the big screen while allowing Lugosi to play another memorable villain.

When you're a mad scientist that is hellbent on taking over the world, you gotta get yourself a death ray. Thankfully, there are plenty of legit, peace loving scientists out there working on such death rays in hopes of bringing about world peace. The mad Roxor (Bela Lugosi) needs a particular death ray and in order to get it, he has to kidnap the beautiful Princess Nadji (Irene Ware). What Roxor doesn't anticipate is Captain Frank Chandler known to the underworld as the mystical Chandu! As Chandu, Frank Chandler has studied and mastered the ways of the ancient yogi and is able to counter Roxor through his otherworldly magical powers. But will Chandu's powers be enough once Roxor gets his hands on the deadly death ray?

If you're a fan of the old radio shows and serials like 'The Shadow' or 'Flash Gordon' - you're going to find yourself right at home with 'Chandu the Magician.' This movie is just good old fashioned popcorn consuming pulpy fun at its finest. The plot is completely ridiculous, the characters are borderline offensive stereotypes without any cultural accuracy, and the special effects are cheesy delights. On top of all that, we get to enjoy Bela Lugosi in his prime. Released just a short year after Lugosi's legendary turn as Dracula, Bela steals every scene he's in and shows who the real star of the movie is - even if Edmund Lowe got top billing. It's also worth noting that Lugosi was such a dominate presence that in 1934 when it came time to make 'The Return of Chandu' - Lugosi actually replaced Edmund Lowe in the title role and came back again for 1935's 'Chandu on the Magic Island.' 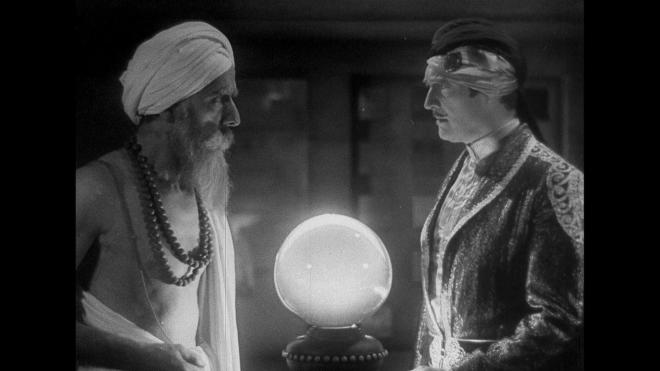 To be fair, 'Chandu the Magician' is hardly the most impressive adventure film of the era. When Tarzan and other heroes of the day were dominating cinema screens, Chandu probably seemed like a no-brainer cash in on a familiar property. The film maintains a fun and energetic momentum throughout its swift 71-minute run time. It wastes little time getting into the action and is over before you know it making it the best sort of disposable entertainment. It's not something you want to dwell on the particulars of for very long or the whole thing unravels. If you're going to sit down and enjoy 'Chandu the Magician' to its fullest potential, it's best to just turn off the brain and go with the flow.

'Chandu the Magician' arrives on Blu-ray courtesy of Kino Lorber through their Studio Classic's line. Pressed onto a Region A BD25 disc, the disc is housed in a standard Blu-ray case with reversible artwork. The disc opens directly to a static image main menu featuring traditional navigation options.

While not given a full restoration effort, 'Chandu the Magician' does enjoy a very strong 1.37:1 1080p transfer. On the positive side of things, film grain has been retained and provides the image some solid detail levels. Greyscale and black levels are clean and even without any terrible crush issues or blown-out contrast. That said, this print is in semi-rough shape. While there doesn't appear to be any dropped frames, the image has constant speckling and tons of scratches running throughout. Thankfully it's not so distracting that you can't appreciate the film, but without a full on restoration effort, this is probably the best the film will ever look.

The image quality for 'Chandu' may be pretty decent, sadly the DTS-HD MA 2.0 audio mix suffers a number of age-related issues. Dialogue is a bit soft and spotty and can be very difficult to discern what is being said forcing you to adjust volume levels. Sound effects are present but don't really add a sense of ambiance or dimension to the scenes, just covers the basics. Hiss and pop are frequent but don't throw off the viewing experience too badly. This is simply a case of the best it can be without some seriously expensive restoration work. It's not terrible, but be prepared to keep your thumb on the volume button.

Audio Commentary: Bela Lugosi biographer Gregory William Mank provides an informative commentary track for this release. What he has to say is pretty much focused entirely on Lugosi and his career trajectory after 'Dracula' turned him into a star, but it does provide some interesting information about this film.

Masters of Magic: The World of Chandu: (SD 15:17) This is a fun highlight reel of sorts of the Chandu character covering the origins of Chandu on the radio and the films it spawned.

2008 Restoration: (SD 1:19) This is a pretty decent side-by-side showcase of the work that went into repairing and restoring the film to the best possible state.

If you're out for good simple fun without any frills with a classic dime store pulp novel flavor, 'Chandu the Magician' delivers the goods. It's an uncomplicated little adventure flick with plenty of action and a great turn from Bela Lugosi. Kino Lorber brings the film to Blu-ray with a decent image transfer, a tough but serviceable audio mix, and some pretty decent extras. If you're a Lugosi fan, it's a great watch. If you're after some light entertainment, you can't go wrong with this one. Worth a look.