When feisty medical student Gabby Holland moves in next door to perennial ladies' man Travis Shaw, it sends them both on a romantic journey neither ever dreamed possible. Travis has always believed a serious relationship with a woman would cramp his easygoing lifestyle, while Gabby is all set to settle down her long-term boyfriend-until an irresistible attraction between the unlikely couple upends both of their well-planned lives. After a whirlwind courtship, Gabby and Travis wed and build a family together, making every decision hand-in-hand until one of them is forced to make the most important choice of their life alone. A poignant and life-affirming celebration of love, marriage and family that explores the most heart-wrenching question of all: how far would you go to keep the hope of love alive?

Some popular literary minds have managed to spawn so many films as a result of their novels that you could almost call their adapted works a genre unto themselves. When you have an author's name attached to a film, the audience has an idea of what to expect. Stephen King you have possibly a horrific creature feature or something dealing with a fantastical element. With John Grisham, you have a lawyer caught up in a potentially deadly legal battle. With Agatha Christie, you have a brain teaser of a murder mystery that somehow all makes sense at the end. Nicholas Sparks, well, you have boy meets girl, boy and girl hate each other, boy and girl fall in love and one of them dies or almost does or something tragic happens that reaffirms their love. Rinse, wash, repeat. For 'The Choice,' the formula hasn't changed in the least bit and the final product almost feels like an unintentional parody of previous novel adaptations. If it had been a parody, 'The Choice' might have actually been worth the time.

He is Travis (Benjamin Walker), a smooth talking party-going man-child who hasn't had to grow up while all of his friends have gotten married and started families. He's also a skilled veterinarian with a big adorable dog so you know he's got a tender heart deep down below that suave, macho exterior. She is Gabby (Teresa Palmer), a stern, slight icy career-driven gal working her way through medical school who hasn't really found love yet because she puts her needs first. She's got a dog too and just so happens to have moved in next door to Travis! At first, they hate each other; she accuses his dog of impregnating her golden retriever and now she's about to be hip deep in puppies. Of course, his dog has been fixed so it can't be his dog's fault. Through it all, the pair find their destined romantic connection.

Before Travis and Gabby, we'll call them TravGab for short, can get together they have to deal with their current romantic attachments. Gabby has the smooth sexy doctor with smoldering good looks Ryan (Tom Welling), and Travis has to break it off with Monica (Alexandra Daddario). Of course, because true love is destined, TravGab have no trouble breaking things off and entering into marital bliss together. The TravGab romance should have been all sunshine and roses but tragedy hangs overhead like the Sword of Damocles ready to split the two apart. But only through their true love will TravGab be able to find a way to overcome and live happily ever after. 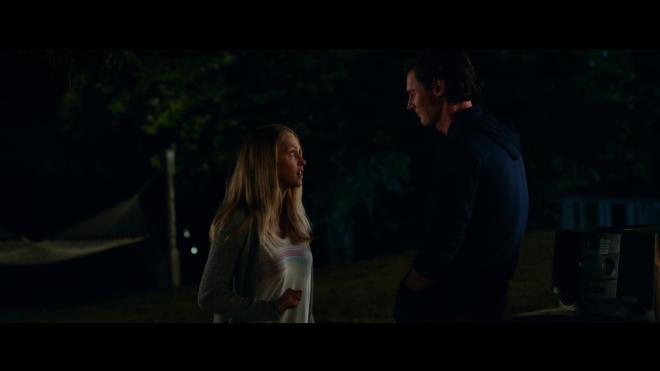 At this point, it's a safe bet to say that if you've seen one Nicholas Sparks film adaptation, you've seen them all. It's difficult to even describe the events of 'The Choice' as "cliche" when the story itself is so paint-by-numbers that you already know what is going to happen long before our star-crossed lovers actually meet. it's just a matter of how, when, and what. How are Travis and Gabby going to meet? When are they going to fall in love? What is going to threaten their relationship and in turn possibly kill one of them? For the sake of spoilers, I'll leave the "What" for you to discover on your own, but let's take a look at the "How" and "When."

How TravGab first met is one for the ages, in that it's quite possibly the stupidest conversation I've ever heard. Travis being the party fun guy that he is, had some people over for a backyard barbecue and much fun was had by everyone except Gabby, because she was trying to study and couldn't because of all of the other people having so much fun. When Travis starts chilling with a brew and some loud tunes, she's had enough and confronts him. What should have been a simple if a somewhat silly argument about noise levels quickly turns into a bizarre and frankly disturbing conversation about the tenderness of Gabby's dog's nipples… because the dog is apparently pregnant. We're given no knowledge leading up to that point that's what is going on so the banter quickly dissolves into a question about whose nipples they're actually talking about. That's supposed to be humor, but it's actually creepy and weird. They're lucky that conversation took place in Travis' back yard, can you imagine overhearing that discussion on a train or public place?

When TravGab inevitably fell head over heals is just as unlikely and uninteresting as their chance first meeting. While the pair were already dating other people, there is absolutely zero dramatic points building up to them ultimately being together. Sure the birth of puppies is a cute bonding moment, but it's nothing earth shattering. 'The Choice' easily could have been a smart and interesting dramatic film about the consequences of cheating on your significant other with the person you're actually in love with. Instead, 'The Choice' is more focused on being vapid and showcasing beautiful people leading beautifully simple lives in beautiful North Carolina. There just isn't really any story to speak of here. Even the film's big, potentially devastating third act climax amounts to little of consequence, so it makes one wonder what the point of the entire venture was? I freely admit to getting a little choked up at 'The Notebook,' but Sparks adaptations just aren't my thing. There's a part of me that want's to enjoy them, but I just don't. That said, I'm pretty sure that even if you're already in the Sparks movie adaptation wheelhouse that you may have a tough time with this tepid romance. There's just nothing special or interesting to make the venture worth your while.

'The Choice' arrives on Blu-ray thanks to Lionsgate and is pressed onto a Region A BD50 disc. Housed in an eco-friendly two-disc Blu-ray case with slip cover, a DVD of the film is also included. The Blu-ray opens with a series of trailers for other Lionsgate releases before arriving at an animated main menu with standard navigation options.

'The Choice' is presented with a bright and beautiful 2.40:1 1080p transfer. Like most Nicholas Sparks adaptations, the location plays a bit role in the story, and the Wilmington, North Carolina locations look fantastic in this film. Details are strong allowing the scenic beauty to shine through while also allowing for fine facial features, costuming and production design to enjoy their time in the sun. There can be some slight blooming at times, but it looks like it was intentional to give the image that picturesque sparkle. Black levels are strong throughout creating a nice sense of image depth. There are a couple of night shots that almost appear as if they were shot in front of a greenscreen because the image loses a bit of shadow separation and depth - again there are only a couple moments like that. All in all, this is a very pretty looking transfer.

'The Choice' arrives with an English DTS-HD MA 5.1 audio track that plays to the strengths of this sort of film. Dialogue comes through crystal clear and keeps to the front/center channels. Side and rear channels are reserved for the score by Marcelo Zarvos and some background atmospherics and sound effects. Most of the time this is a fairly front-loaded audio mix with only subtle uses of the surround elements. It's not a dramatic sounding film filled with amazing uses of imaging and channel movement, but this mix scores points for evoking a sense of space and presence throughout the run. All around this is a nice and even mix that suits this film's style.

Audio Commentary: Director Ross Katz and Benjamin Walker lead the effort here. It's a nice commentary, not altogether informative, but they do offer up enough production tidbits to keep the track interesting.

Nicholas Sparks With…: (HD 32:37) Sparks takes some time to interview various cast and crew members, it's pretty simple stuff and not much more than routine questions found in an EPK feature.

Choosing Home: Nicholas Sparks and North Carolina: (HD 8:53) This short little feature takes a look at all of the various North Carolina locations that so many of Sparks' novels take place in.

Molly and Moby: Choice Dogs: (HD 5:47) The two most important actors in the film are featured in this short extra feature.

Deleted Scenes: (HD 2:47) Pretty simple stuff, nothing too amazing missing from the film that would dramatically alter the story.

If you're not a fan of Nicholas Sparks adaptations, 'The Choice' won't make you a fan. If you're already a fan of these movies, then you already know what to expect, almost detrimentally so. There isn't really anything new to the Sparks formula and the story will likely leave even the most ardent supporter wanting more. Lionsgate has brought 'The Choice' to Blu-ray in fine order with a splendid A/V presentation and a fairly decent collection of extra features. 'The Choice' really is one for the fans.

Sale Price 13.99
List Price 14.99
Buy Now
3rd Party 13.88
In Stock.
See what people are saying about this story or others
See Comments in Forum
Previous Next
Pre-Orders
Tomorrow's latest releases