'Miracles From Heaven' is based on the incredible true story of the Beam family.  When Christy (Jennifer Garner) discovers her 10-year-old daughter Anna (Kylie Rogers) has a rare, incurable disease, she becomes a ferocious advocate for her daughter’s healing as she searches for a solution. After Anna has a freak accident, an extraordinary miracle unfolds in the wake of her dramatic rescue that leaves medical specialists mystified, her family restored, and their community inspired.

It's tough to be faced with a movie where you have to question its motives. Why is it telling me this story in this way with these characters? More or less this is true for every film that comes out, but for some, this question is especially glaring. In this instance, I'm speaking about faith-based films. There seems to be this constant need and preach to the choir and reaffirm a belief structure rather than challenge those beliefs in order to find and build faith. This is especially true for 'Miracles from Heaven.' Based on a true recent well-documented incident involving a little girl's bizarre recovery from an incurable illness, the film's powerful message is undercut through a series of events too convenient to be believable and a number of unrealistically inhumanly unsympathetic characters.

Life is looking up for the Beam family. Successful veterinarian Kevin (Martin Henderson) has just expanded his practice into a new state of the art facility. That fact that he and his wife Christy (Jennifer Garner) had to put up their home as collateral is a bit worrisome, they're sure everything will work out for them and their three girls Anna (Kylie Rogers), Abbie (Brighton Sharbino) and Adelynn (Courtney Fansler). The girls are doing great, they have a nice plot of land with horses, goats, and half a dozen dogs and are part of a supportive church lead by Pastor Scott (John Carroll Lynch).

Everything the Beams have going for them, their health, their way of life, their finances disappear overnight. Suddenly, little ten-year-old Anna gets sick. Really sick. Nothing she eats stays down for very long, she's in constant pain, and her abdomen slowly becomes painfully distended. Doctor after doctor can't seem to find anything wrong with her. Even when they have to take her to the ER in the middle of the night, Christy and Kevin have to demand more tests. It's discovered that the poor girl has an extremely rare digestive disorder, one where there is no known cure. The only hope they have is Dr. Nurko (Eugenio Derbez) whose practice is located thousands of miles away in Boston.

Christy and Kevin put up everything they have in order for Christy and Anna to go see Dr. Nurko every month. Kevin works double shifts, they max out credit cards, they move heaven and earth just so that Anna can be treated by Dr. Nurko. Even with his experimental treatments, Anna doesn't get any better. With her faith tested Christy fails to see the logic in God's plan - especially after members of their church dare to suggest Anna's condition is some sort of punishment for sin. Just when all hope is lost, Anna falls through a rotted tree while playing and experiences something that can only be described as a miracle. 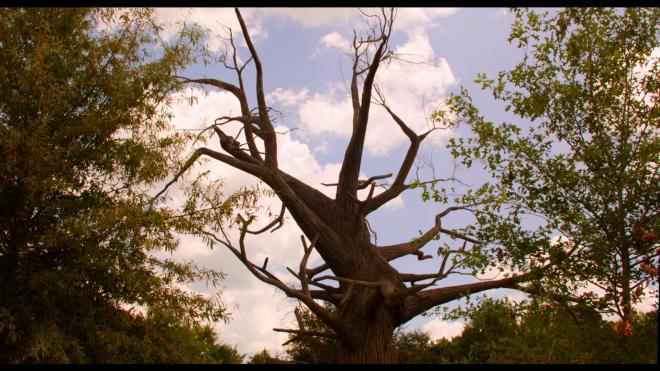 To be fair and honest, 'Miracles from Heaven' has a lot of heart to it. One would have to be a cynic of titanic preparations to not be affected by some scenes in the film - especially moments involving the unending pain displayed by Kylie Rogers as little Anna. It's tough to watch a child suffer and this movie doesn't pull those punches. Unfortunately, the film undercuts empathy through a series of encounters with side characters who can only be described as "dicks." As I haven't read Christy Beam's novel on which this film is based, I can't speak to the authenticity of these moments, but in the film, they come across as so unsympathetic, so inhumane that they can't be believable.

The unbelievably of those characters undercuts the value of the sympathetic characters that pop up later in the film. Characters like Bruce Altman's Dr. Burgi or Queen Latifah's Angela, people who are caring and friendly to the Beams and their plight are undercooked and their generosity feels false or something that should be met with a degree of skepticism. Especially since they're all but forgotten once their five minutes of screen time is up. All of this side stuff becomes a seemingly unending distraction from the focus that should be planted on the Beams. Any illness, especially one that involves a child is a horribly stressful situation and this is the time that we should be spending with the Beams and their other two daughters. There are some scenes that cover this territory, but it feels like an afterthought because the script was too busy showcasing so many other unpleasant people who by all rights deserved to be slapped and put in their place.

Why I am holding onto this aspect of the film so heavily is because it proves to be a distraction from the big event of the story. When the real Anna Beam fell into the rotted-out tree, it made the news. It was a big event. Especially because she emerged unconscious but otherwise unharmed which was incredible. I remember seeing coverage on the news and then hearing about it again because inexplicably her life-threatening digestive disorder cleared up. As far as I'm aware, there is no known reason for why her fall and hit on the head effectively cured her other than to call it a "miracle." Instead of focusing on the tense and emotional three-hour struggle to free the little girl from a rotted tree, the film instead burns all of its runtime peppering in token sermons about faith and God's mysterious plan. That's all well and good as a parable or sorts, but it's not very cinematic. Especially when you consider the most emotional and inspirational event of the entire story is run through as if the film was on fast forward. In point of fact, the film's only genuine character outside of Anna and the rest of the Beams is Dr. Nurko played with wonderful heart by Eugenio Derbez. In my opinion, if this movie really wanted to bring home a story about faith, hope, and optimism in the face of tragedy, it should have really been about his character and his relationship with Anna and Christy. He treats children who are probably not going to survive for long, he doesn't have hope, but he keeps trying because he has faith and believes that by trying he can make a difference and maybe find a solution. His full circle moment is when he can't provide an explanation to Jennifer Garner's Christy why Anna is better, he can't even medically or ethically say she's "cured," but deep down he knows the truth. It's a wonderful emotional moment in a film that has too few of them. While 'Miracles from Heaven' is better than the average faith-based movie out there, it still falls into the same story convinces and character stereotypes to keep it from being something truly entertaining and emotionally rewarding.

'Miracles from Heaven' arrives on Blu-ray courtesy of Sony. Pressed onto a Region Free BD50 disc, the Blu-ray is housed in a standard Blu-ray case with identical slip cover and comes with a Digital HD voucher slip. The disc opens with trailers for other faith-based films coming from Sony before arriving at the main menu featuring traditional navigation options.

'Miracles From Heaven' arrives with a digitally sourced 1.85:1 1080p transfer. Considering this is a recent release, I was actually kind of amazed at the lack of detail throughout a lot of the movie. A number of scenes appear rather soft without definition. Closeups and some midrange shots appear well-detailed, but wide shots tend to suffer, especially if the focal object is in the distance. The indicator of this is the grassy fields the Beams live on. At times blades of grass look smeary even in shots where normally one would see some great detail. The image tends to look very "video." Colors are bright and robust favoring earth tones and rich golden yellows. Primaries have plenty of pop and flesh tones look balanced and healthy. Black levels are set well without any crush issues to speak of. Some banding pops up from time to time as does some motion blur. The image is decent enough, but for such a recent release I'm actually kind of let down by its appearance.

'Miracles from Heaven' arrives with a rock solid English DTS-HD MA 5.1 audio mix. This is a very dialogue heavy film and everything is clean and clear to hear. Sound effects and background atmospherics help provide a sense of space and dimension to the film - from the wide and open Beam ranch to the tight and narrow hospital hallways. Imaging displays some great channel movement, especially during the big climax rescue while also keeping the surround channels working in subtle ways. The mix also makes plenty of space for the score by Carlo Siliotto to fill some of the empty areas. Free of any issues, the mix is pretty great and serves the film well.

Audio Commentary: Director Patricia Riggen and Screenwriter Randy Brown provide a very good commentary for this film. They come from a place of having met the real Beam family and wanting to do the story justice. The pair does a solid job talking about the film, shooting in Georgia, casting, and tackling the dramatics of the story. A pretty informative commentary.

Miracles Abound: The Making of 'Miracles from Heaven': (HD 9:16) This is a pretty standard EPK style making of, very brief, covers the typical topics.

Bearing Witness: (HD 9:09) This is a pretty cool "meet the real people" extra feature as we're introduced to the Beams and hear their story personally. It would have been cool if this was a longer feature. Less than ten minutes is too short.

'Miracles from Heaven' tries really hard to be a great family drama. A lot of the story elements are there, but the film tends to make situations overly simplistic, certain characters inhumanely insensitive, and as a result loses focus on its heart. Some great performances from Garner, Kylie Rogers, and Eugenio Derbez aren't enough to bring this faith-based drama out of mediocrity as it spends too much time preaching to a specific choir rather than spending the effort to make the film accessible to everyone. Sony brings the film to Blu-ray with a decent if flawed image transfer, a great audio mix, and a fine assortment of extras. This is a film with a set audience. If you're already on the faith-based bandwagon, it's one to keep on your radar. If you're not into this sort of film but are a little curious it's a rental, otherwise 'Miracles from Heaven' is for the fans.

Sale Price 8.09
List Price 14.99
Buy Now
3rd Party 2.13
In Stock.
See what people are saying about this story or others
See Comments in Forum
Previous Next
Pre-Orders
Tomorrow's latest releases