On the evening of Saturday, November 4th, 1995, Prime Minister Yitzhak Rabin was assassinated with three bullets at the end of a political rally in the center of Tel-Aviv. His killer, apprehended at the scene, was a 25-year-old student (and observant Jew). The following investigation reveals a frightening world that made this killing possible: a subculture of hate fueled by hysterical rhetoric, paranoia and political intrigue. In Rabin, The Last Day, acclaimed filmmaker Amos Gitai (Kadosh) masterfully combines staged re-enactments with actual news footage of the shooting (and its aftermath) to create a thought-provoking political thriller.

How a film presents itself is a key element for any film to hook an audience and draw them into the project. This is especially important when dealing with historical events and figures. One could do a documentary. A filmmaker could also try doing a biopic of sorts complete with reenactments. Rarely does it ever work to try both approaches at the same time, unless the filmmaker doesn't mind a certain amount of fiction to seep into the final product. Oliver Stone's 1991 ode to the conspiracy theory 'JFK' used recreations, reenactments, and archival footage to create a compelling and immersive world. For Amos Gital's docu-drama 'Rabin, The Last Day' an attempt is made to combine all of these elements, recreations, archival footage, and reenactments to produce a detailed account of the final moments of Itzhak Rabin's life and the chaos that followed his 1996 assassination at the hands of Yigal Amir. While the content, the meat of the piece is very compelling, its presentation at times makes the film feel like an over-budgeted episode of 'America's Most Wanted.'

'Rabin, The Last Day' opens with an interview between Yaël Abecassis and former Israeli Prime Minister Shimon Peres. Peres was with Rabin at the rally held just moments before Rabin's death. He recounts the days leading up to the assassination amid the outcry from the opposition and the hostile atmosphere that greeted Rabin. His candor about Rabin and how the man would act as if nothing phased him is touching and heart-wrenching material. In these brief few moments, you feel for the man who would have to succeed his former political rival and friend as Prime Minister.

This sort of back and forth interview material would have been interesting and exciting to watch all on its own as it is inter-spliced with archival video footage from that final rally where hundreds of thousands of supporters of the Oslo Peace Accords came out to see Rabin speak. It plays like a one on one Errol Morris documentary like 'The Fog of War' or 'The Unknown Known' where through casual conversation and some simple probing questions, the subject starts to open up. You start to get a sense of their emotional state, and as they describe events as they unfolded, you start to feel some genuine suspense. 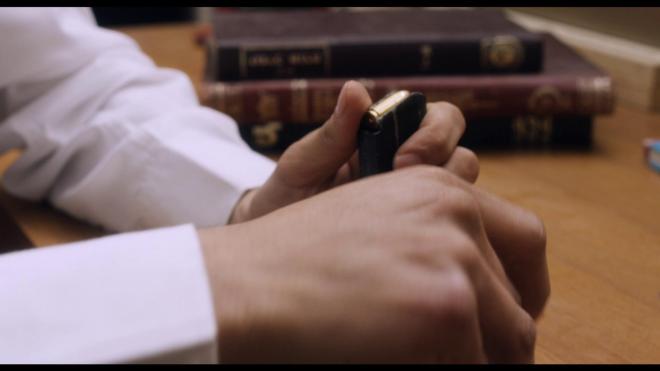 Had 'Rabin, The Last Day' stuck to this interview-style documentary formula and only used relevant archival video material to break things up, this film could have been incredibly powerful with an important message about the volatility of peace and the courage of a single man to stand up for something that was unpopular. Where 'Rabin, The Last Day' starts to fall off the rails is when reenactment footage starts to take over and dominate the film. One moment you're watching a recent interview, the next the audience is thrust into a stylized political thriller.

While this new format of a biopic, a historical retelling pseudo-political thriller has some compelling moments, it's buttressed with archival footage and the interview documentary. The switching from one to the other is very clunky. One second you could be watching footage from an old television broadcast announcing the death of Rabin, and the next shot is a recently shot reenactment of reporters who are supposedly at the scene reacting to the TV reporter's words. It just doesn't work. What should be building suspense about what is going to happen next to a country whose political system and workings have been thrown into chaos ends up pulling you out the film.

When you see an actor portraying the unsympathetic and cold Yigal Amir after the assassination as he's being processed for police interrogation, the film is exciting and interesting. You watch his mannerisms of confidence and fearlessness become upended when a woman officer is the one who has to take his finger prints. It's just another example of the duality of this film that just never comes together because Peres starts to narrate the situation and the audience is jerked back into watching a documentary again. To be fair, there is some incredible work on display here, but the combined efforts of a political thriller and a documentary don't fall lock-step in sync with one another. 'Rabin, The Last Day' easily could have been two separate films, an edge-of-your-seat political thriller, and a lone documentary. The decision to combine the two just didn't work for me and every time I felt like I was getting into the film and starting to have an emotional connection with what was happening, I was immediately pulled out of it. If you go into this film with the idea of being informed about an event in world history that is still having political ramifications 20 years later, you should find some value from 'Rabin, The Last Day.' If you're going into this film hoping for some sort of educated entertainment experience, I fear you may find yourself lost in the weeds.

'Rabin, The Last Day' arrives on Blu-ray courtesy of Kino Lorber. Pressed onto a Region A BD50 disc, the disc comes housed in a standard Blu-ray case. The disc opens to a static image main menu featuring traditional navigation options.

With a 1.85:1 1080p transfer, 'Rabin, The Last Day' is a combination of multiple sources to create an effective whole. A lot of great care clearly went into finding the highest quality archival elements of the actual events surrounding Rabin's assassination. While these video elements do stand out, they're in good shape and at times blend in well with the newly shot interview footage and reenactment scenes to create a cohesive aesthetic. Some edits work well, others not so much, but the illusion holds up. To that end, detail levels tend to fluctuate making it fairly obvious what scenes are archival elements and what were more recently shot. Colors tend to skew towards that darker side of things considering the events in question, but through the drab grey tones and shadows, there is enough primary presence to add some appealing colors to the image. Flesh tones are accurate. Black levels are also spot on, especially for the reenactment scenes. All around this is a very strong and interesting looking presentation.

'Rabin, The Last Day' arrives with a strong conversation-focused Hebrew DTS-HD MA 5.1 audio track with English subtitles. So much of this film is made up of back and forth conversations that it is at times difficult to notice the surround elements. However, if you listen close, the subtle usages of crowd sounds, busy backgrounds, atmospherics, and the score by Amit Poznansky work to build out the surround channels in a pleasing but not hyperactive way. Some of the reenactment scenes come to life with quite a bit of audio presence, but even then it's subdued so as not to interfere with the interview dialogue or some piece of archival news footage. The mix is even, favoring the midranges and levels are spot on.

The life of Yitzhak Rabin and how he met his unfortunate and untimely end is a cinematic-worthy story. I have vague memories of the events detailed in 'Rabin, The last Day,' watching the news coverage and the fallout of the events. This film is certainly an educational experience as there are a number of details about the assassination that are fascinating, however, because of the format the Rabin himself as a man and as a character never really comes to light. The film focuses on the side players and results are interesting if not completely satisfying. Kino Lorber brings the film to Blu-ray in fine order with a strong video and audio presentation. Sadly, a trailer is the only extra feature. 'Rabin, The Last Day' may not be as successful as it could have been, but it is still an interesting watch. Worth a look.

Sale Price 11.94
List Price 34.95
Buy Now
3rd Party 11.94
In Stock.
See what people are saying about this story or others
See Comments in Forum
Previous Next
Pre-Orders
Tomorrow's latest releases