The essence of baseball is the primal battle between the pitcher and the batter, a magical moment only 396 milliseconds in the making. The mysteries and memories of baseball s greatest heroes are revealed in Fastball, as it features interviews with dozens of former players, from legendary Hall-of-Famers to up-and-coming All-Stars, including Hank Aaron, Nolan Ryan, and Derek Jeter, with narration by Kevin Costner (Field of Dreams). Fastball is peppered with archival footage of baseball s greatest moments, plus original high-speed 4K footage and motion graphics that unlock the secrets hidden within a ball traveling over 100 mph. While players, historians, and scientists might disagree on who was actually the fastest pitcher in history - and yes, the film does the physics and concludes with a clear verdict - Fastball tells the story of the game itself.

A good documentary should inform its audience rather than placate it. If you're merely preaching to an audience, then you're not really doing the subject matter any justice. Sure, the audience may eat it up to some degree, but the quality of the work will be notably diminished. That said, it's a great day when you can find a documentary about a topic you may already know a little something about and come away from the experience with your mind blown. This is the experience I had with filmmaker Jonathan Hock's 'Fastball.'

Going into this film, I didn't think there would be too much material to 'Fastball.' I was wrong. At first, all I thought the film would be about is some history of the fastest pitch and maybe give some anecdotal musings on the throw, and maybe bring in some old timers and that would be that. To a degree, 'Fastball' is that sort of a documentary, but the exhaustive approach to the topic is what sets this little sports documentary onto a level of its own. One wouldn't be wise to compare it to something as exhaustive as 'Ken Burns' Baseball,' but for a singular topic such as the fastball, 'Fastball' leaves no stone unturned.

As a red-blooded male born in the 1980s and grew up during the 1990s during a time before steroids were even talked about in baseball, the game was relatively pure in my eyes. You could count on certain players to step up to the plate and knock it out of the park, or certain pitchers to deliver thrilling, edge-of-your-seat no-hitters. I wasn't a pitcher, or a power hitter when I played junior league ball in middle school, but I was good at getting on base. To get there I had to be brutally aware of the fastball and all the tricks it played. While I could hit it more times than not, I also knew that if I blinked or took my eye off that pitcher's hand for even a moment, I was beaten. I was also aware of the rising fastball, something science says is impossible, but ask anyone who faced one and they'll tell you it looks like the ball skips on the air. 'Fastball,' to my great delight' covers a number of those tricks and allows the scientists and the players to both be right by their own viewpoints.

By bringing in some of the greatest pitchers in the game like Nolan Ryan, Rich Gossage, some great archive footage of Sandy Koufax, and newcomers like Justin Verlander, Cincinnati Reds ace pitcher Aroldis Chapman and his 105mph fastball, and great hitters like Wade Boggs and Hank Aaron, 'Fastball' dissects the pitch from the players perspective. It's amazing to hear their thoughts about what the ball does as it's zipping towards the batter at 100 miles per hour. There are a lot of great stories out there and 'Fastball' easily could have just been these guys talking shop and had still been incredibly entertaining. 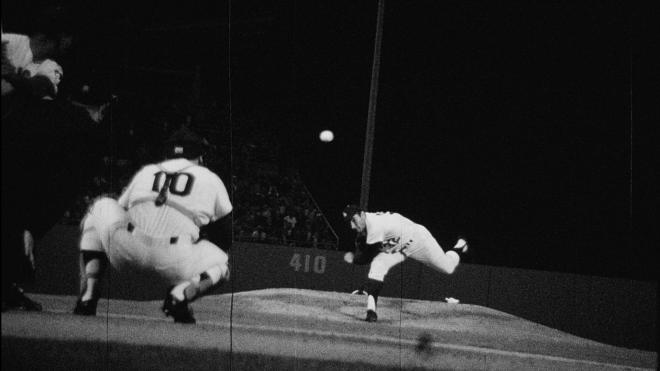 As great as hearing the stories from these legends are, it's the interviews with the cognitive specialists and physicists that add the most weight to the show. These scientists have gone to great lengths to dissect what the ball actually does versus what players perceive the ball does. It's a hotly contested idea because while the scientists can put out an array of numbers to prove their point, they also lack the perspective of staring that ball down as it's coming towards you at over 90 miles an hour.

The next bit that makes 'Fastball' incredibly interesting is when it segues into covering an age-old debate, "who is the fastest, hardest pitcher?" When I was a kid I have clear memories of my dad suddenly changing the channel on the TV or turning off a movie we were watching and switching to a random baseball game. I remember it being odd that my dad would suddenly turn on this game because the Detroit Tigers weren't playing, the Texas Rangers were and that was a team we didn't follow. But there was this man wearing a white and blue  uniform pitching strike after strike and batter after batter would go down. That pitcher was Nolan Ryan and at 44 years old was pitching his seventh career no-hitter. I was 8 years old at the time, I hardly even knew a no-hitter was even possible and here it was happening on our televisions screen. For my money, Ryan is and will always be the hardest pitcher, but statistically was he? 'Fastball' works to provide an answer to that question and offers some clever insight into who the fastest and hardest pitchers are, but because of measurement limitations, we're left with mere estimates, and the debate is far from settled.

Throughout the run of 'Fastball,' Kevin Costner does a fantastic job narrating each segment. At a swift 86 minutes, the documentary is never dull and often incredibly informative. Today, I only maintain a basic upkeep knowledge of what is happening in the sport. I'm only fervently involved when the Tigers are playing really well, but I love the game just the same. I appreciate it when a documentary of this sort comes along and doesn't seek to put the definitive end statement on a particular topic in place. While this film certainly has its own opinions about things, it also allows for a margin of error that keeps debate about the sport alive and healthy. I've watched this documentary three times now and it managed to pull me in every time. There is so much fascinating material and so many great interviews it's difficult to take it all in during a single viewing. Sports fans should drink this documentary up, and if you're stuck finding a gift for a baseball nut in your family, you'll score some serious brownie points by wrapping up a copy of 'Fastball' and sticking their name on it. My only complaint is that this movie could have been longer. Not because it feels rushed or too short, but because I could have sat on my couch for another two hours and been perfectly happy.

'Fastball' arrives on Blu-ray courtesy of Kino Lorber. Pressed onto a Region A BD50 disc, the disc is housed in a standard Blu-ray case and opens directly to a static image main menu with traditional navigation options.

'Fastball' arrives with a stellar 1080p presentation with a primary aspect ratio of 1.78:1. Throughout the run of the film, sources of varying quality are used from old newly restored 16mm footage to 4:3 vintage television footage. The recent interview footage of all the old great pitchers and hitters is newly sourced digital and benefits from the technological uptick in clarity, detail, and color. The vintage material is dependent on the condition of the source, some look better than others. All around the picture quality is quite good for a documentary of this nature. It's a thrill to see so many great highlight moments of so many athlete's careers in one place that any faults in the presentation are easily forgiven.

'Fastball' enjoys a pretty typical dialogue fronted English DTS-HD MA 5.1 audio mix for a documentary like this. Those expecting to experience a rousing thundering surround track may be left disappointed. While this track is very good, it doesn't make much use of the surround elements. Dialogue is what is most important here and it is kept front and center where it belongs. Some of the archive material can sound a tad tinny or harsh, but that's due to the recording processes of the respective time rather than a fault of the audio mix. The score by Tony Morales does a good job of filling in the sides and keeping the track lively and engaging. For a documentary of this sort, this is a very strong mix even if it may not make full use of the surround channels.

Extended Interviews: (HD 31:15) This is a collection of material that sadly didn't make it into the final cut of the film. It's understandable why it's not in there, it may not all be the most relevant material, but it's worth a watch if only to hear from some more great hitters and pitchers.

Hall of Fame Outtakes: (HD 2:23) I wish this segment was a lot longer than it is. Seeing and hearing these guys talking to each other about the glory days is like going to the local barber shop and hearing the old timers. The stories are great and a wonderful listen.

Steve Dalkowski Extended Scene: (HD 11:42) This was probably one of the more gut-wrenching segments of the film, it's always tough hearing about a guy who could have been one of the greatest players in the game but never got his chance. This extended segment is nice because it shines just a little more light on the man.

'Fastball' was an unexpected joy of a watch. I have a base love for baseball so whenever I'm treated to something of this sort, I tend to eat it up. I love that this film was informative without taking the intelligence of the audience for granted. It also doesn't placate the audience by just feeding them stats or facts but leaves this hotly discussed topic open for continued debate. Just because they think they know who the fastest and hardest pitcher to play the game is, doesn't mean it's always going to stay that way. Kino Lorber has done a fantastic job pulling this Blu-ray together with an excellent A/V presentation and a bunch of worthwhile extra content to pick through. Obviously, this one isn't going to be for every film fan out there, but if you have a love for baseball or know someone who is, you can consider 'Fastball' highly recommended.

Sale Price 17.49
List Price 34.95
Buy Now
3rd Party 17.48
In Stock.
See what people are saying about this story or others
See Comments in Forum
Previous Next
Pre-Orders
Tomorrow's latest releases