Dean Martin (Rio Bravo) and Brian Keith (The McKenzie Break) star in this high-spirited western packed with laughs and plenty of action. All Joe Baker (Martin) ever wanted was to do Something Big… really big. But in order to accomplish it, he has to hold up a stagecoach, kidnap a beautiful woman, trade her to a shady racketeer for a Gatling gun, and try to outrun his fiancé who's come to reclaim her man. Something Big is classic Dean Martin in the grand style only he can create. Wonderfully directed by Andrew V. McLaglen (Cahill U.S. Marshal) and beautifully shot by the great Harry Stradling, Jr. (Convoy). The stellar cast includes Honor Blackman, Merlin Olsen, Joyce Van Patten, Carol White, Albert Salmi, Don Knight, Robert Donner, David Huddleston and western legends Ben Johnson, Harry Carey Jr., Denver Pyle, Paul Fix and Bob Steele.

When an actor delivers a fantastic performance in a particular genre such as a comedy or a thriller, you naturally go into their next attempt at the genre with a certain set of expectations. It's the foundation of type casting. An actor continuing to play a certain type of character that the audience expects. Dean Martin was well known for being a comedy straight man on TV screens as well as silver screens. He also delivered a fine dramatic performance in the western adventure classic 'Rio Bravo.' In 1971, Dino put his best talents to work for the light hearted western 'Something Big' from Director Andrew V. McLaglen and written by James Lee Barrett. While the tone of the film waffles inconsistently from madcap comedy to straight western adventure film, the final product proves to be a fun and worthwhile experience.

Joe Baker (Dean Martin) has big dreams. Not content to be a small man in a giant world, he wants to make a name for himself and build a gigantic fortune. Alongside partner and pal Tommy McBride (Don Knight), Joe has staked out the perfect heist. "Something Big" that will put him on the map, make his fortune, and allow him to return to the east and marry McBride's sister Dover (Carol White) as he promised to do four years earlier. The only problem is Joe needs a Gatling gun! Two people have Gatling guns, the army outpost headed by Col. Morgan (Brian Keith) and a black market gunrunner named Cobb (Albert Salmi). Since the army isn't likely to give one up, Cobb is the only one in the territory with what Joe needs, but Joe is going to have to pay a big price. Cobb want's a woman, and there aren't too many women in this part of the country.

Joe is thrust into holding up stage coach after stage coach searching for the perfect woman to pay Cobb. When the perfect woman does show up, it turns out that the beautiful lady Mary Anna (Honor Blackman) is Col. Morgan's wife! Now with the army breathing down Joe's next trying to retrieve Mary Anna, Joe needs to pay off Cobb, get his gun, pull off the "something big" he's been planning for years. Should be a piece of cake, but when an impatient Dover shows up looking to force Joe to go back east, Joe's entire well-laid plan is about to go up in smoke. 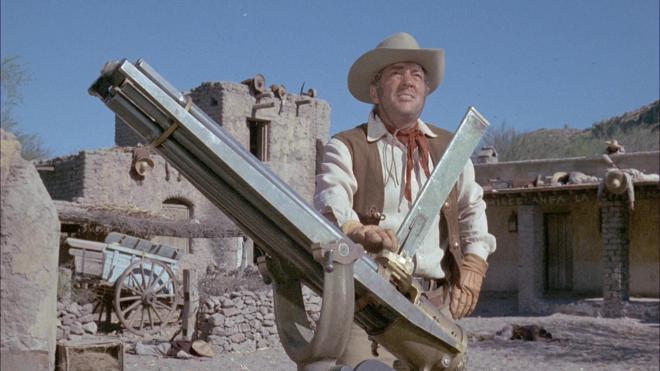 'Something Big' sets out to entertain an audience. While it does succeed in that endeavor, it's also a tonally inconsistent film. One one hand, it tries to play things as a straight heist film with elements of a traditional western. Then there are some of the comedy elements that just don't quite mesh, as they feel like they belong with a film like 'Cat Ballou' complete with a reoccurring musical motif by Burt Bacharach. In fact, it's this reoccurring musical number that actually dooms the front end of the film. It's just too silly. Every time something goes wrong for Joe, that tune echoes the disappointment. It was funny once, maybe twice, but after the third, fourth, and fifth time it becomes irritating. Thankfully, once Honor Blackman's Mary Anna shows up, the tune goes away and the film evens out, but the memory of that jaunty tune leaves its bruise. The film recovers and the balance between comedy and heist film are struck leaving the rest of the film a fun and exciting romp.

At the center of the show is Dean Martin as Joe Baker. I've always felt that Martin was always the better second man than lead, but in this case, I'm willing to make an exception. Martin has a great knack for playing a guy in over his head and he's in fine form here. While his plan is smartly laid out and seems like it could be well executed, he also looks like someone whose eyes are a bit too big for his stomach, so to speak. Rather than being a daring cowboy with a six-shooter, Martin's Baker is more like an office manager with too many things to contend with in order to get a big project done on time. Playing on the opposite end of the spectrum is Brian Keith as Col. Morgan. Morgan has control of everything in his command, his men run a tight ship and when Baker starts causing trouble, he slowly loses control of everything. When the pair are forced to become partners, it's out of comedic desperation rather than a genuine need of either man's company.

All around, 'Something Big' is an entertaining film. It has its ups and downs, but thankfully those positive notes outweigh any sour ones. If you're in the mood for a movie that is just good fun and only wants to entertain an audience, 'Something Big' should fit the bill nicely.

'Something Big' arrives on Blu-ray thanks to Kino Lorber and their Studio Classics line. Pressed onto a Region A BD25 disc, the disc is housed in a standard Blu-ray case. The disc opens with a static image main menu with traditional navigation options.

'Something Big' comes with a middling 1.85:1 1080p presentation. On one hand, film grain is retained allowing for a well-detailed image. Costuming, set design, facial features, and the beautiful western scenery come through with great clarity. However, outdoor sequences appear to have oddly faded coloring. Considering these scenes appear to be shot in full sunlight, the colors don't have a strong vibrancy. Greens appear a tinge yellowish, while browns appear a shade of tan and flesh tones appear a bit too pale. On the flipside, the colors normalize whenever the action moves indoors. Suddenly flesh tones appear more natural and tanned. Reds have a deeper vibrancy to them. Blues richen. It's an odd effect. It's not something that ruins the experience of the film, it's just an odd anomaly that is worth mentioning. Black levels are well balanced, contrast levels are under control and the image has a pleasing sense of depth to it. There is some slight edge enhancement, but no banding. A decent back catalogue transfer.

'Something Big' comes with a bright and poppy English DTS-HD MA 2.0 audio track. Dialogue is front and center and easy to hear throughout. Sound effects have a nice natural presence. The music by Burt Bacharach and score Marvin Hamlisch have a bright presence and keeps an even pace with the rest of the track. The mix also displays a nice sense of space and dimensionality, especially during the big explosive climax. The track is free of any age-related issues making for clean a neat presentation.

If you're in the mood for a classic style western that has a sense of humor and fun to it, 'Something Big' with Dean Martin should be on your radar. While it may not be the best western/comedy genre mashup ever produced, but it manages to hold its own. Kino Lorber has brought 'Something Big' to Blu-ray in fine form with a decent image transfer and a solid audio track. Sadly there aren't any extra features of value, but the film is still a lot of fun. Recommended.