This multilayered, immensely entertaining drama from the great contemporary French director Olivier Assayas is a singular look at the intersection of high art and popular culture. The always extraordinary Juliette Binoche is stirring as Maria, a stage and screen icon who is being courted to star in a new production of the play that made her famous—only this time she must assume the role of the older woman. Kristen Stewart matches her punch for punch as her beleaguered assistant, called upon to provide support both professional and emotional for her mercurial boss. And Chloë Grace Moretz is Maria’s arrogant new castmate, a starlet waiting in the wings. An amorphous, soul-searching tale, filled with ethereal images of its Swiss Alps setting, Clouds of Sils Maria brilliantly dramatizes one woman’s reckoning with herself and
the world. 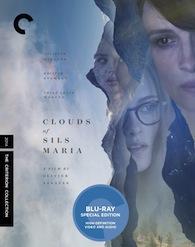 Time is the one thing in life no one can escape. We're given just so much of it to accomplish so many goals and enjoy the experiences we seek to have. Careers, love, friendship, legacy, all are something each of us experiences in our own ways. Olivier Assayas's Palm d'Or nominated film 'Clouds of Sils Maria' is a deconstruction of these themes through the eyes of an aging stage and screen star who is asked to take on a role in a remake of the film that launched her career. While the film features amazing performances and takes a thoughtful look at what it means to get older and effectively be replaced, its musings about the film industry and art become distracting and can feel entirely too self-absorbed for its own good.

Maria Enders (Juliette Binoche) owes all of her career successes and longevity to a single screenwriter and director. This one work, a love affair between two women that turns tragic launched her name into the marquee above movie theaters and onto the biggest Broadway and East End stages. The story was about an older woman named Helena and her relationship with a younger impressionable girl named Sigrid. And now, over twenty years later, Maria is being asked by hot new film director Klaus Diesterweg (Lars Eidinger) to take on the role of the older Helena in a new remake. The role of the younger woman would be going to up-and-coming tabloid troubled starlet Jo-Ann Ellis (Chloë Grace Moretz).

Initially, Maria refuses the opportunity out of respect to her departed mentor and costar. But, after the urging of Maria's young assistant Valentine (Kristen Stewart), Maria reluctantly takes the part. Together Maria and Valentine travel deep into the Swiss Alps to isolate themselves and help Maria prepare for the role. At first, the private rehearsals between Maria and Valentine go smoothly, but as Maria roots herself deeper into the role of Helena, she sees a reflection of the past. Where once she was the brash young star, she is now the aged veteran actress who is on the way out in an industry that favors youth. The emotional strain of finding herself in this new role could be more than Maria is prepared to handle emotionally and physically. 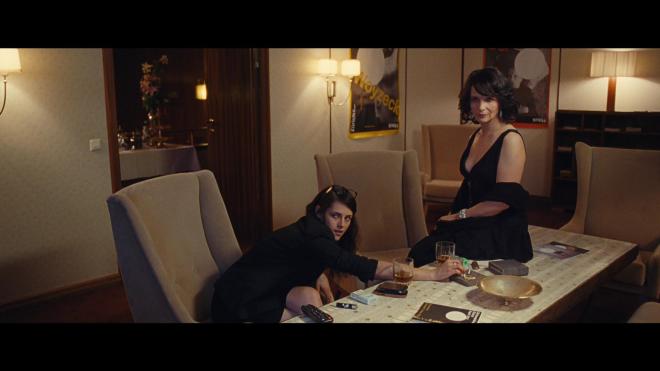 At its core, 'Clouds of Sils Maria' is a ponderous look at age, beauty, and how everything changes whether we want them to or not. Where the film is at its strongest and the interplay between Kristen Stewart and Juliette Binoche works best is when the film plays with these themes. Stewart's Valentine is young, attractive, she has her own life and romantic liaisons apart from an industry that obsesses over youth and beauty. This puts Binoche's Maria in a sad and rather an unfortunate position of having to see the world she can't go back to through her assistant's eyes. She can't roll back time or the fame she's acquired. She can't become that bright new actress again and redo past events. With the arrival of the hot new star of the hour Jo-Ann Ellis played by Chloë Grace Moretz, she can see her inevitable replacement. It's a wonderfully dramatic and arresting theme and the performances from its central players are fantastic.

Where 'Clouds of Sils Maria' falls away for me is when it gets to be too industry reflective for its own good. By tackling the themes of actors, actresses, writers, and directors being a revolving door of talent that is replaced every generation, the film already made a grand statement about the industry. Where the film runs aground and can be difficult to take earnestly is when it starts to take stabs at genre tastes, in particular, the rise and popularity of Superhero films. I won't hide from this point, I grew up reading comic books. As a kid who had to deal with his share of rampant degrading bullying, comic books were my anchor to the world and my escape. Sure, some of them are silly and soulless pieces of pop entertainment, but they also taught me an appreciation of language, art, and story structure. To that end, I can get defensive when a film such as 'Clouds of Sils Maria' turns its nose up at a genre like Superhero films and other mass audience friendly genres the way that it does. While there is a valid point that Hollywood may well be too obsessed with these films, it's also an aspect of the industry that has always been there. From musicals to political thrillers to science fiction space operas to westerns, Hollywood goes through genre-obsessive cycles. While the quality of these films waiver from one to the next, they produce big box office receipts. They keep people employed. They give young talent a chance to shine. And, these popular films inevitably allow dramatic arthouse films to be made and released because the talent involved has proven themselves on a larger stage. 'Clouds of Sils Maria' didn't need to make this point by throwing a cheap imitation of superhero films at the audience. Especially one that hasn't been relevant since the late 1990s.

Normally I would forgive a film acting a bit high and mighty, but there are several breaks throughout 'Clouds of Sils Maria' where the thrust of the story comes to a dead halt. These moments seem to only exist so that Valentine and Maria can get into a spirited conversation about film as art, modern films versus those made decades ago, and whether or not a young star is as talented as an older more established one. 'Clouds of Sils Maria' continually circles these themes through multiple conversations to the point that I began to roll my eyes in frustration when the next of these conversations started up. I appreciate it when a film has subtext and layers to it, but this film constantly keeps pulling the themes and subtext to the forefront and distracts itself from the heart of the story. Even through these tedious moments, the amazing performances that Juliette Binoche and Kristen Stewart provide manage to shine through. The film is worth seeing just to appreciate these talented actresses work off each other. Some may be enraptured by the film and love it completely. Others may find it too self-absorbed to be fully accessible. Unfortunately, I found myself floundering in the later category.

'Clouds of Sils Maria' arrives on Blu-ray courtesy of The Criterion Collection. Pressed onto a Region A BD50 disc. Housed in a standard Criterion Collection clear case, the disc comes with a booklet featuring stills from the film as well as an essay by Molly Haskell. The disc opens directly to the film's main menu featuring standard navigation options. 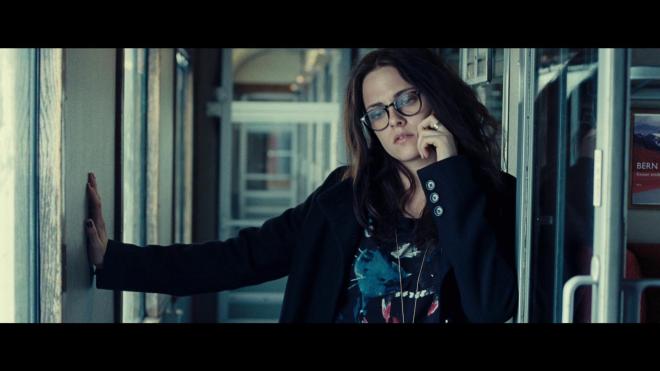 'Clouds of Sils Maria' arrives with a beautiful and striking 2.40:1 1080p transfer. Detail is impeccable here as everything from fine facial features of the cast to the clothing to the beautiful location shots in the Alps are appreciable and light up the screen. Colors are well balanced favoring the cooler tones, but the image is awash in bright and bold primaries, especially when the film moves to the mountain locations. Black levels are deep and inky and provide the image with a wonderful sense of three-dimensional depth. The image is about as close to perfect as one could expect, however, there is one very strange anomaly worth mentioning. At around the 17:30 mark, there is a very notable skip in the image. It doesn't affect the audio, it just looks like a really bad cut between two different takes of the scene. It stands out clear as day and can be a bit jarring. After doing a little digging, this is actually a part of the image. In spite of that oddity, the image is very beautiful to look at and serves the nature of the film well. 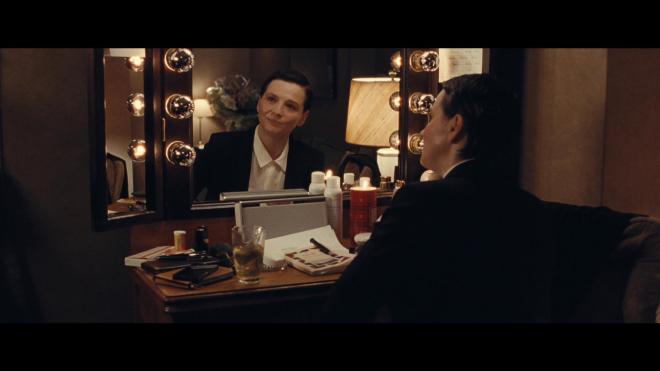 'Clouds of Sils Maria' comes with a pleasing and resonate English DTS-HD MA 5.1 audio mix. There are some moments in German and French with English subtitles. This is a conversation-driven film and the dialogue keeps front and center throughout. There is little in the way of a musical score instead relying on contemporary tunes, especially during one particular sequence half way through with Valentine driving home from a party that pulls in some musical elements. Otherwise, the film is almost entirely dialogue, sound effects, and ambients to fill the scene. Even through all of the quiet touches, the film displays a wonderful sense of space and dimension throughout every scene. Imaging is present but not a dynamic factor as this isn't a film that relies on an abundance of channel movement. Levels are spot on and you shouldn't have any need to adjust the volume once you have it set where you like it. 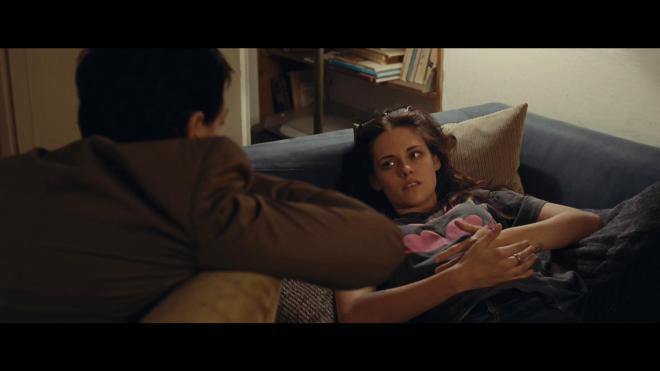 Olivier Assayas Interview: (HD 37:46) The writer/director discusses how the film came to be, as a reflection of how he and Binoche worked together nearly thirty years earlier and how this film is a reflection of their career trajectories. He also goes into great detail about his approach to the material, shooting on location, and casting. It may not be a full commentary track, but he provides tons of interesting and informative material.

Juliette Binoche and Kristen Stewart: (HD 37:46) Shot separately and edited together, the two actresses provide a fantastic amount of detail about working together, finding their characters, and what it was like working together. It would have been something to get these two to have done a commentary together as they have a lot to say about their own careers and their reflections in their characters as well as the current state of the industry.

Cloud Phenomena of Maloja (1924): (HD 10:23) This is a silent short film by Arnold Fanck that appears in 'Clouds of Sils' maria. This is only a piece of the original documentary as the original negative has been lost and only pieces of it survive. It's beautifully shot and wonderful to look at. 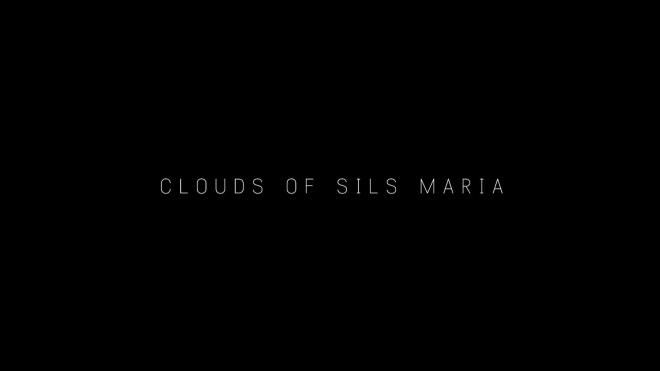 While 'Clouds of Sils Maria' is a thoughtful and dramatically interesting film, its story becomes weighed down by an over-examination of its themes. It's a film that I want to like more than I do, especially for its impressive performances from Juliette Binoche and Kristen Stewart, but I found some of its musings to be too preachy and pandering. Some may not mind this, but I found some of it to be too abrasive to be accessible. The Criterion Collection brings 'Clouds of Sils Maria' to Blu-ray in fantastic form with a beautiful transfer and a strong audio mix. Extras, although few, are impressively informative and provide an interesting look at the film from the cast and crew perspective. I wasn't taken by the film, but I can see many getting something out of the experience making this worth a look.