Some people have a special gift. They're able to travel between the realms of the Living and the Dead...and Tomb Raiding can mean Big Business. Welcome to the world of the Mojin. Based on the #1 Bestselling series of novels and starring Shu Qi, Chen Kun, Angelababy, and Huang Bo, MOJIN: THE LOST LEGEND pits a trio of legendary grave robbers against scholars, rivals, and the law until an offer from a mysterious stranger tempts them into one last heist...an adventure that will test their skills, their friendship, and ultimately their mortal souls.

It's strange when you watch a film and suddenly feel like you're missing something. Even though you've sat through the film from the beginning and saw the albeit strange but still explanatory prologue, the main movie can still feel like a mystery in which you haven't been let in on any of the clues. 'Mojin: The Lost Legend' is just that sort of film because it is actually a sequel to another film. So just when you feel like character build-up and exposition has been completely taken for granted, it's actually a little reassuring that what you're watching is operating under the supposition that you already know the character. Even with that caveat in place, 'Mojin: The Lost Legend' can still be a bit clunky and confusing although wildly entertaining as it offers a cool take on the treasure hunter action flick.

Hu Bay (Chen Kun) and his wife Shirley (Shu Qi) and their partner Wang (Huang Bo) are a trio of grave robbers who make a living by recovering valuable ancient artifacts from dangerous places. While their methods may not be on the up and up, they are very successful at reacquiring cultural artifacts of importance - for a price. But they've put all that behind them as Hu Bay and Shirley wanted to lead a quieter life. Everything changes when their goofball former partner Wang accepts a job that he obviously shouldn't have. Now Hu Bay and Shirley are forced out of retirement to take on this dangerous task of recovering magical amulets with the power to raise the dead for a treacherous cult leader (Xia Yu).

I would be lying if I said that I was able to follow and fully understand everything that I saw in 'Mojin: The Lost Legend.' I spent a fair amount of the film's 125-minute runtime in a fog of confusion primarily because I just didn't know who half the characters were, why they were doing what they were doing, or what the stakes were. That's because this film is a sequel to 2015's 'Chronicles of the Ghostly Tribe' which hasn't yet been released here in the United States. Imagine watching 'Alien Resurrection' not having seen 'Alien,' 'Aliens,' or 'Alien 3' and be put in a position of having to infer all of that back story. That is in a nut shell what is expected of audiences trying to get caught up with 'Mojin: The Lost Legend.' I only discovered that there was a previous film and that these movies are based off a series of novels when I looked this movie up on IMDB. Being put in the position of watching a sequel without seeing its predecessor is a bit awkward but when the first movie finally makes its way here, I may be able to fully appreciate this film. 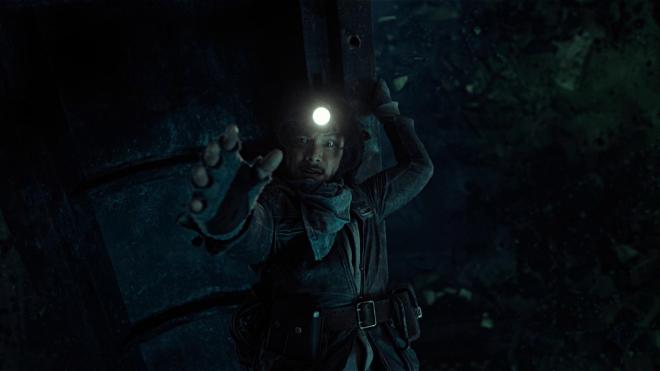 Part of the issue facing 'Mojin: The Lost Legend' is the frequent and confusing flashbacks. These moments are tossed in without much setup or motivation as a means to explain what is happening with our characters - whom we still don't really know that well. it's enough to leave it at Hu Bay, Shirley, and Wang are skilled tomb raiders known for being able to steal rare cultural artifacts. We don't really need much more information that Hu Bay and Shirley want out of the game to start a family. We get that information well enough without needing too much explanation, and yet a confusing flashback is tossed in and it just muddies the story. It's a simple premise of a movie that is unnecessarily stretched out at least 30 minutes longer due to the flashbacks.

At its core, 'Mojin: The Lost Warrior' is a combination of the 'Tomb Raider' games, the 'Uncharted' games, with a dash of 'Indiana Jones' tossed in for flavor. A lot of this film actually feels like a big special effects version of 'Temple of Doom' with a lot more fantasy elements. There is a lot of fun to be had with some wild and crazy visuals and action sequences, but I feel like your enjoyment is going to depend on seeing that first film. Thankfully it looks like Well Go USA has it on their release docket for sometime this summer. Perhaps after I see that one, I'll come back to 'Mojin: The Lost Legend' and give it another viewing after hopefully experiencing some proper character setup. I feel that this is a film I should really enjoy, but I just found it very confusing and difficult to get through at times - simply because I had no idea what was going on. If you are curious to check out 'Mojin: The Lost Legend,' I would wait to see the first film, just so you have an idea of who the characters are and don't have to spend so much time trying to figure out who everyone is and how they're related to one another. Maybe then you can just sit back and enjoy the flick.

'Mojin: The Lost Legend' arrives on Blu-ray thanks to Well Go USA. Pressed onto a Region A BD25, the disc is housed in a standard Blu-ray case. The disc opens with trailers for other Well Go USA releases before arriving at the main menu with standard navigation options.

With a 2.30:1 1080p transfer, 'Mojin: The Lost Legend' makes for a bright and beautiful presentation. Originally this film was shot and released in 3D in China and other foreign markets. Sadly, we're only given the 2D version of the film here in the states. The image has a very 3D staged feel to it that just doesn't quite come to life in this 2D version. Thankfully black levels are very strong and there is very good shadow separation so there is a sense of depth to it the image. But knowing that there is a 3D version of the movie out there makes it difficult to appreciated this 2D only presentation. Colors are bright and beautiful throughout favoring yellows and earth tones. Primaries also have a nice and even saturation. Details are also very strong for this digitally sourced image allowing the audience to fully appreciate facial features, costuming, and some of the more impressive set pieces and production design work. All around this is a very good looking image, but as with the case with a number of Well Go USA imports from the Chinese, Korean, and Japanese markets, I really wish 3D versions of the films were made available, especially in the case of 'Mojin: The Lost Legend.' So much of the action is staged for 3D you can't help feel its absence.

'Mojin: The Lost Legend is given a thundering and exciting Mandarin DTS-HD MA 5.1 audio mix with English subtitles. Dialogue is clean and clear and keeps front and center, but not really the focus of this film. This is an action movie with a lot of wild set pieces and that's where the strengths of this mix are found. Atmospherics and background effects do a fantastic job of creating a sense of space and dimension to any given scene. Combined with the amazing score, the mix stays lively and active ensuring the surrounds are constantly engaged without overpowering the experience or drowning out the dialogue. Levels are well balanced without any need to adjust the volume. Imaging is strong with plenty of channel movement and directionality. All around this is a fantastic audio track that serves the film's strengths.

Making Of: (HD 4:00) This is your standard short EPK material that doesn't really say much.

Behind the Scenes: (HD 6:56) Made up of two very short interviews with Chen Kun and Huang Bo.

'Mojin: The Lost Legend' is one of those movies that I'm going to have to revisit down the road. As a sequel, it feels incredibly dependent on the events of the first film - which hasn't been released in the United States yet. Once that film comes out I'll want to see this one again with the hope that it's a better experience. There is a fun and entertaining movie in here, but because of a confusing structure and clunky exposition, it's difficult to fully enjoy. Well Go USA has delivered another fine Blu-ray release with a strong A/V presentation. Alas, no 3D edition is available yet, but maybe someday it will be released here stateside. Right now, I'm saying that 'Mojin: The Lost Legend' is worth a rent, my hope is that after seeing the first film I'll enjoy this one better and be able to improve my grade for this film.

Sale Price 11.99
List Price 29.98
Buy Now
3rd Party 4.53
In Stock.
See what people are saying about this story or others
See Comments in Forum
Previous Next
Pre-Orders
Tomorrow's latest releases