Assigned to protect a seemingly safe U.S. Embassy in the Middle East, elite Marine Corporal Evan Albright (Charlie Weber) thought he wasn't going to see much action. But when a hostile and extreme military group launches a surprise attack aimed at killing an Embassy informant, Albright's team is caught off guard. Out-gunned and outnumbered, the Marine's routine assignment escalates into an all-out war. With national security at stake, an international crisis ensues in this riveting film directed by William Kaufman (The Hit List) starring Dennis Haysbert and Scott Adkins.

Sometimes it's good to go into a movie with very low expectations. When you're handed the second direct-to-video sequel to a film that never even should have even had one sequel in the first place, it's easy to become cynical . When I fired up 'Jarhead 3: The Siege' I expected little to nothing more than a macho cliche action movie, but I was surprised to find a flick that genuinely tries to be good. To be fair it's hardly a great movie, but you can see and appreciate the effort.

For new marine on the scene Evan Albright (Charlie Weber), being a marine isn't a job or a duty, it's a family tradition. His father was a marine, his grandfather was a marine, so he has a name to live up to. The problem is, Albright's efforts are quickly seen by his peers Hansen (Tom Ainsley), Lopez (Erik Valdez), and even his C.O. Gunny Raines (Scott Adkins) feel the new guy is just acting "cowboy." He even goes so far as to go over the heads of his superiors when he suspects a terrorist has targeted Ambassador Cahill (Stephen Hogan). All this effort to impress earns Albright a bad rep and tough details as a result.

Things change for the worse when Albright is proved right and a terrorist believed to be dead attacks the under-protected embassy. Once everyone is in the safe room, it should have been an open and shut situation - wait for backup and hold your position. When the ambassador reveals that sensitive information is at risk and needs to be retrieved, Albright and his fellow marines will put their lives on the line to keep the Ambassador and the civilian staff safe while they retrieve the sensitive information. Even with help only an hour away, it may come too late to be of any use. 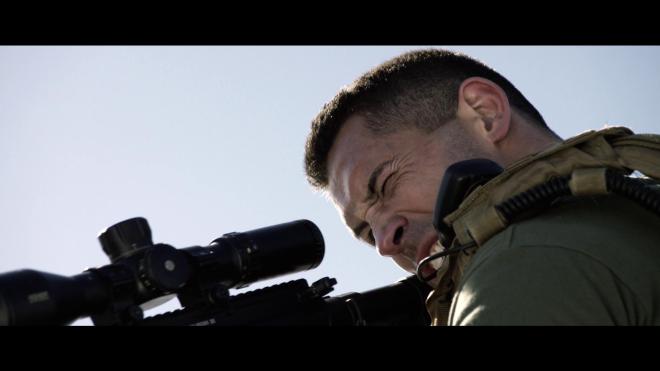 'Jarhead' was a thoughtful, pondering war film that easily could be described as an anti-war film. It wasn't about battles or bullets, it was about the psychological effects of war set against the backdrop of Desert Storm. More 'Full Metal Jacket' and less 'Saving Private Ryan.' 'Jarhead 3: The Siege' is related to the first film in name only. It's content to be a low-budget macho action movie that lets Scott Adkins act the badass with big guns while unceremoniously pulling elements from the tragic 2012 Benghazi attack. To that effect one may be inclined to question the tact of the film or its level of taste as it plays to a base audience. However, if you're going to do that you're going to overthink the film in a big way. This is simply a stupid action movie that tries to do a lot with very little.

What gives 'Jarhead 3: The Siege' an edge over run-of-the-mill direct-to-video fare like 'War Pigs' is that it actually makes an earnest attempt at character development. Charlie Weber's Albright is given several opportunities to unravel the layers that make up the onion. He gives a made up history he tells people so he can be proud of who he is, he's even given a true history so that everyone knows he's full of it, and he's given more than one opportunity to prove himself the true hero. Even the side characters are given little moments like this to show their stars and stripes without being macho cliches. There certainly those thin characters making up a number of the bullet-fodder characters, and the film doesn't exactly embolden itself towards skewing common ethnic stereotypes, but it isn't entirely a cheap flick that insults your intelligence either. Perhaps the worst thing going for it is that it carries the namesake of 'Jarhead.' With that anchor around its neck, it carries a lot of weight of expectation and comparison. Compared to its progenitor, 'Jarhead 3: The Siege' is a travesty. As a standalone cheap, B-movie action flick, 'Jarhead 3: The Siege' isn't half bad and is surprisingly watchable.

'Jarhead 3: The Siege' arrives in a 2-disc Blu-ray, DVD, Digital HD set from Universal Home Video. The Film is pressed onto a BD50 Disc. The Blu-ray and DVD are housed in a standard 2-disc Blu-ray case with identical slipcover artwork. A voucher for an Ultraviolet/iTunes digital copy is also included. The Blu-ray opens with a series of trailers for upcoming Universal releases before arriving at a static image main menu with traditional navigation options.

An issue worth noting: supposedly this release has two cuts of the film, an R-rated and Unrated one, however, both cuts come in at 1:29:06 and unless I missed something, there is nothing to distinguish one from the other other than some slightly bloodier violence. This could well be an authoring error as according to the reverse side of the artwork, the Unrated Cut should run at an hour and forty minutes.

Shot digitally, 'Jarhead 3: The Siege' arrives with a very strong but relatively unremarkable 2.35:1 1080p transfer. While the image offers plenty of detail with bright bold colors with even primary saturation, the image can appear oddly flat at times. Several sequences appear to have been shot in front of green screens so there is the usual flatness to those moments, but even during some of the heavier action beats, there is a notable lack of depth keeping this image from earning full scores. As I mentioned details are very good, fine facial features, clothing, and the production design work are on display and can at times betray the film's slim budget. I'll put it this way, there are a lot of random cardboard boxes stacked about various scenes. Black levels are for the most part stable and inky. The only real issue is the flat appearing image otherwise there really isn't anything terrible about this transfer considering the budget constraints.

Considering the direct-to-video nature, 'Jarhead 3: The Siege' arrives with a punchy English DTS-HD MA 5.1 audio track. Dialogue, what there is of it, is front and center and clearly heard. The front end of the film is actually more conversationally driven as it works to set the stage and introduce characters. Sound effects offer a sense of imaging and dimensionality, but they don't have the extra natural oomph as you might expect from a mix designed for a big theater, but this one gets the job done when the action kicks in. The score by Frederik Wiedmann works to round out the mix without being too intrusive or overpowering. Levels are well balanced and don't require any monitoring. All around a fine mix that gets the job done.

If you're even remotely going to enjoy 'Jarhead 3: The Siege,' two conditions need to be met. First, you can't compare it to the original film, that's pointless, and second, you need to go in with the mindset that it's just dumb fun. You'll hurt yourself if you think about it too much. Universal has brought the film to Blu-ray in fine form with a pretty decent A/V presentation. The lone extra feature is pretty bare bones material. If you're a fan of brainless action flicks, you could do worse than 'Jarhead 3: The Siege.' If you're curious, give it a rent, a blind buy may be a tall order, but you wouldn't exactly waste your cash either.

Sale Price 8.5
List Price 9
Buy Now
3rd Party 3
In Stock.
See what people are saying about this story or others
See Comments in Forum
Previous Next
Pre-Orders
Tomorrow's latest releases