Comedy legend, John Candy (Uncle Buck) is hilarious in this laugh-a-minute daytime soap opera spoof which co- stars Mariel Hemingway (Star 80), Emma Sands (Dynasty), Raymond Burr (Perry Mason), Dylan Baker (Happiness), Charles Rocket (Dumb and Dumber), Jerry Orbach (Law and Order) and David Rasche (Sledgehammer). When Jack clumsily bumps his head, he wakes up in the small town of Ashford Falls, the setting of his popular show. But what begins as a nightmarish scenario turns into the opportunity of a lifetime as Jack finds he can control the events around him by writing them. With typewriter at hand, Jack attempts to win the love of the show's beautiful 'bad girl' (Samms), but while scripting his destiny with her, he keeps running into an accident prone 'good girl' (Hemingway). Will he be able to win the coveted woman of his dreams? Will he win a Daytime Emmy? Only one thing's for certain: His attempts to write his own ticket will leave you laughing Deliriously! Directed by veteran screenwriter Tom Mankiewicz Delirious was his follow-up to his hit directorial debut, Dragnet the only two feature films Mankiewicz ever directed.

It wouldn't seem like it, but comedy is actually an incredibly hard genre to make work. If you've seen a bad comedy that was just painfully unfunny, this should be pretty obvious. What's great about a good comedy is that when it works it becomes something memorable and special, something that you want to revisit over and over again. With a simple but fun premise and the always fantastic John candy headlining, Tom Mankiewicz' 1991 madcap comedy 'Delirious' may not be one of the greatest comedies committed to film, but it proves to be a fun and entertaining way to spend 96 minutes.

When you're on the top, there's nothing that can slow you down. This is true for soap opera writer and producer Jack Gable (John Candy). His show Beyond Our Dreams is a daytime ratings smash and he has just completed the next season's bible and everything should be perfect, except when it comes to his love life. For years, Jack has pinned and crushed over the beautiful Laura (Emma Samms) edging her character of debutant Rachel Hedison into becoming the star of the show just so she would like him and maybe, just maybe take an interest in him. The only problem is network producers Lou and Arlene Sherwood (Jerry Orbach and Renée Taylor respectively) don't want her on the show anymore because her contract is getting too expensive.

Because the producers want to create a new character Janet Dubois, the naive, new-to-the-big-city Louise (Mariel Hemingway) is on set to audition. Because Jack is dedicated to his craft, he throws a fit and secretly promises Laura that her character isn't going anywhere, he unwittingly sets himself up for heartbreak. Thinking he's going to be taking Laura on a weekend getaway, he ends up discovering she's been sneaking around with her costar Dennis (David Rasche) and in the process knocks himself in the head with the trunk of his car. When Jack wakes up, he awakens in a living nightmare - he's actually in his own show! All of the characters he's written day in and day out for years are alive and well and believe that he is actually the crazy one. As Jack quickly learns, because he created everything he can write the world he wants creating a place where he is the star of the show and women find him irresistible. But as he gets to know Laura/Rachael a bit better, he comes to understand that maybe Janet/Louise is the one who really holds his heart. 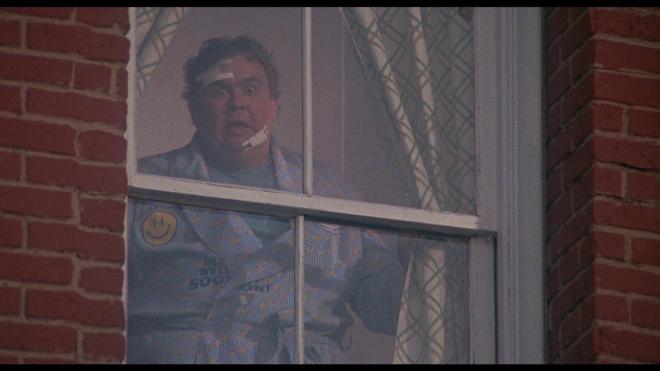 'Delirious' is one of those middling comedies, a film with an excellent premise, a fantastic cast with a fine director but for some reason, it just doesn't quite turn out as well as it should. Still, this is a John Candy flick, so it's fun, with a number of great moments, but the film seems more enamored with the cleverness of its concept rather than focusing on generating some truly great characters and mining the comedy from that. The daytime soap opera is the perfect set piece for this little film to exist in and there are more a few great jabs at the genre, but part of me wishes that the film's script by Lawrence Cohen and Fred Freeman had taken it a bit further instead of skipping off the surface.

As a child of the 80s living in rural southeastern Michigan, I didn't have cable growing up, so summers were spent tuning the antenna to the local Detroit stations for entertainment. Because I had an older sister, I was routinely subjected to an untold number of hours of episodes of 'Days Of Our Lives.' While I hated the show, I can't deny the entertainment value when you have actual plot lines featuring the prominent female lead of the era becoming possessed by the devil and then the most over-sexed character in the show becomes a catholic priest to perform the exorcism. I mean, that's comedy gold right there and that show played it straight. I wish 'Delirious' hadn't been so focused on the world mechanics that it had constructed and instead had focused on plots like that. For how much fun this movie tries to have, a lot of it starts to feel forced in the final stretches as the true laughs become fewer and fewer.

'Delirious' is still a lot of fun and that largely has to do with this great cast headed by John Candy. The man was in fine form with this one, making his passing all the more tragic. Dylan Baker is also a great addition in the soap opera world as the character Blake Hedison who is being slowly poisoned and the physical symptoms are a riot and Raymond Burr delivers some amazing deadpan comedy. Then you have Emma Samms who was clearly channeling her Fallon Colby character from 'Dynasty' bringing that aristocratic arrogance to the show and it's a great fit. Sadly the only really dead weight here is Mariel Hemingway who is doing her best to be funny, but the material just isn't there. All in all 'Delirious' makes for pretty good rainy day entertainment. It may not be a show stopper but it still manages to entertain.

'Delirious' arrives on Blu-ray thanks to Kino Lorber and their Studio Classics line. Pressed onto a Region A locked BD25 disc and housed in a standard Blu-ray case, the disc opens directly to a static image main menu featuring traditional navigation options.

'Delirious' arrives with a pretty decent 1.85:1 1080p transfer. The problems really facing this film's HD presentation is that because of the time it was made, there really isn't all that much to look at and appreciate. Colors are on the muted side for a number of scenes giving the image an almost drab feel while some outdoors sequences can appear bright and beautiful. Primaries are pushed a bit hot so reds tend to look almost orange while flesh tones appear on the pinker side of things. Film grain is intact allowing for some pleasing facial features, but there is a softness to a number of scenes preventing a truly sharp and beautiful look. Not a terrible presentation, for a back catalogue title that doesn't look to have undergone much in the way of restoration, it looks pretty good.

'Delirious' comes packed with a strong DTS-HD 2.0 audio track. Since this is a conversation loaded flick, dialogue comes through crystal clear and is never intruded upon by the sound effects or the score by Cliff Eidelman. Background effects give the track a nice sense of atmosphere and dimension and there are plenty of movement moments that give a sense of imaging. Levels are spot on. This is a sort of bouncy movie featuring a number of high-pitched gags and the track handles the ebbs and flows well without feeling the need to adjust the volume. All around this is a pretty great track and it serves the nature of the film well.

'Delirious' may not be a perfect movie, or even a great comedy for that matter, but with its great cast featuring the always fantastic John Candy, the film is still a lot of fun and a good watch. Kino Lorber has brought the film to Blu-ray with a serviceable A/V presentation with trailers as the only extra features. If you like 90s comedies or are a John Candy fan, 'Delirious' is worth a look.

Sale Price 79.99
Buy Now
3rd Party 49
In Stock.
See what people are saying about this story or others
See Comments in Forum
Previous Next
Pre-Orders
Tomorrow's latest releases