Summer Camp the way you always wished it was! Get set for a visit to the wildest summer camp you've ever seen in this utterly outrageous comedy starring Dennis Quaid (The Big Easy), Fran Drescher (TV's The Nanny), Michael Lembeck (The Boys in Company C), Philip Casnoff (North and South and North and South, Book II & III), David Huddleston (Billy Two Hats) and Rosanna Arquette (Desperately Seeking Susan). Camp Oskemo, summer haven for children of the very rich, will never be the same thanks to a group of camp counselors who'll stop at nothing to have a good time. Their madcap antics include night raids on the girl's bunkhouse, showing porno movies on parents' day and wild gambling parties on the camp kitchen. All in all, it's a merciless onslaught of gags, goofs and guffaws that can only be summed up in one word GORP! Hollywood veteran Joseph Ruben (The Stepfather, Dreamscape) directed this hilarious comedy in the tradition of Meatballs.

As I mentioned in my review for 'Donovan's Brain,' all it takes is for one really good movie or story to spawn a whole slew of imitators. This is true for every genre from dramas to science fiction movies to horror pictures. It's especially true for comedies where if one film proves to be a hit, you can bet a parade of lower-grade imitators are sure to follow. When the summer camp classic movie 'Meatballs' hit theaters in 1979, a number of misguided ripoffs followed including a trio of pretty terrible sequels. One of the ripoffs that tried to capitalize on the success of 'Meatballs' was the 1980 film 'Gorp' - a movie so bad it proved to be the death rattle for famed American International Pictures.

At Camp Oskemo, the staff has a special way of doing things that have been an age-old tradition of debauchery and hijinks as they take care of the snobby spawn of rich people from New York City. When you have kitchen staff like Kavell (Michael Lembeck), Bergman (Philip Casnoff), Federman (Lou Wagner) and the military crazed Mad Grossman (Dennis Quaid) serving the kids, what could go wrong? A lot actually. When the wait staff isn't delivering meals, they're schmoozing up to the sexy girls' counselors like Evie (Fran Drescher), Vicki (Lisa Shure) and Judy (Rosanna Arquette) with the dire hope that their time serving at Camp Oskemo won't be a dry summer. When the guys aren't going after the ladies, they're running bets in the kitchen with the likes of Sweet Moe (Otis Day), Fred the Chef (Julius Harris) and seeing how much booze Wino Willie (Bill Kirchenbauer) can consume without dying.

I've heard that 'Gorp' is a fan favorite for a number of people, but to be fully honest, I just didn't see the humor. Since there really isn't anything even remotely resembling a plot, this movie feels like a bunch of ideas of seemingly hilarious antics and goofs cobbled together without any real story or actual characters to anchor the endeavor. So what you get as a result is one bad joke after another and since the pace never really slows down the film just becomes painfully unfunny. About the only performers that are even remotely funny are Dennis Quaid and Otis Day as their characters are so over the top that they manage to rise above the muck. 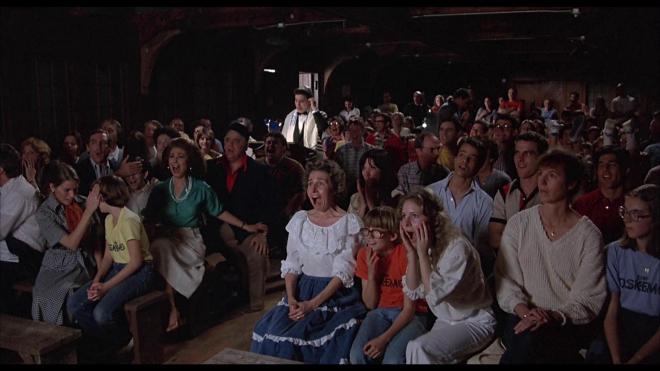 As someone with a diverse taste in movies, it doesn't take a lot of effort for me to just turn my brain off and go with it, but 'Gorp' proved to be an endurance test. For example, within the opening minutes when you're getting to know the cast of goofy characters we're going to follow, we're immediately introduced to one whose kooky quirky schtick is to aggressively masturbate in a closed metal locker. Mentioning that bit alone should give you an idea of the rest of the movie, but I'll give you a couple more examples. There's the scene where we're introduced to Evie's promiscuity because she has sex with different men one right after the other using the same lines of dialogue - this sequence actually made me think the disc had skipped instead of making me laugh. Then you have the drinking game with Wino Willie where the film is sped up to the final movement of Rossini's William Tell Overture - it's painfully clear that Bill Kirchenbauer isn't actually drinking anything as it all comes pouring down the front of his shirt. That sequence lasts the full four minutes of the famed theme to 'The Lone Ranger' and is depressingly not funny.

I like to give movies a lot of rope and few ever come back to hang me in the way that 'Gorp' did. When you look at the cast list of accomplished actors and actresses who have displayed in other works some solid comedic chops, it makes the final product of 'Gorp' that much more unfortunate. For a wild and zany 1980s comedy, it's not like the movie really had all that much to live up to or work against to stand out but somehow this movie found a way to not really be much of anything. At least not much of anything worth recommending - unless you're really desperate for an early appearance by Dennis Quaid.

'Gorp' arrives on Blu-ray thanks to Kino Lorber and is pressed onto a Region A locked BD25 disc. Housed in a standard Blu-ray case, the disc opens directly to a static image main menu featuring traditional navigation options.

With a 1.85:1 1080p image, 'Gorp' manages to come away with a half-way decent HD presentation. Film grain is intact but the baked in softness and focus issues keep a number of fine details and textures at bay. Colors keep to the warmer lush summer tones but at the same time, flesh tones can appear on the sickly pale side of things. Black levels are okay, some moments can appear deep and inky allowing for a nice sense of depth to the image while others can look a tad crushed and flattened. The print sourced for this transfer is in okay shape but there is a modest amount of speckling throughout that is especially apparent during the night scenes, and some noticeable scratches pop up from time to time. All around this isn't a terrible transfer but it doesn't appear that a lot of effort went into it either.

'Gorp' comes with a middling English DTS-HD MA 2.0 audio track. The biggest offender for this mix are the levels. The film is nothing but loud peaks and low valleys and as a result, it's hard to find the middle sweet spot so you can actually hear what an actor is saying one second and then not have your ears blasted off when a goofy gag pops up in the next cut. When there are a group of actors huddled together it can also become a bit difficult to make out who is actually speaking as there is a lack of space and dimension to the track so everything just sort of turns into mud. Thankfully there aren't too many of those as most scenes are comprised of a single actor trying to make their character stand out in some inane boisterous way.

Audio Commentary: Writer and producer Jeffrey Konvitz provides a solo commentary for this one. He has some genuinely nice things to say about the film, but a lot of what he has to say seems to come from the place of nostalgia from working with the actors and not so much the final film.

Woof. 'Gorp' is a dog of a comedy that I just could not get into. I may have given the movie a slight chuckle or two here and there, but the film's jokes are so unfunny the efforts of its talented cast are wasted. Kino Lorber has brought the film to Blu-ray but was supplied with a serviceable video transfer, an audio mix that required constant volume adjustment, and an audio commentary and trailers to round out the extra features. Just on the quality of the movie itself, I'd recommend that most people skip it.

Sale Price 18.99
List Price 29.95
Buy Now
3rd Party 11.53
In Stock.
See what people are saying about this story or others
See Comments in Forum
Previous Next
Pre-Orders
Tomorrow's latest releases