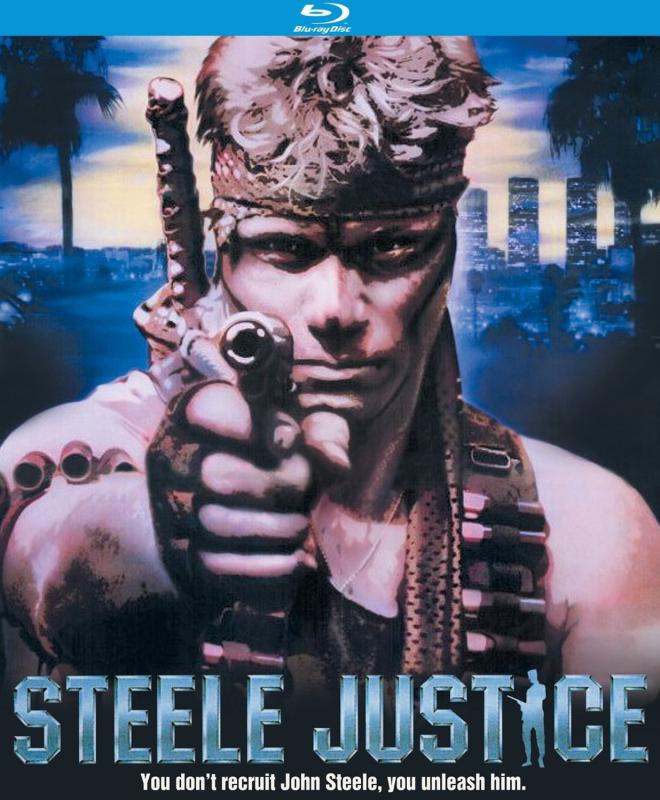 As more back catalogue titles from the 1980s continue to be released each month, I can't help but fall in love the output of that decade. You have cinematic classics like 'E.T. The Extra-Terrestrial,' 'Out of Africa,' and 'Gandhi,' but you also have the numerous tough guy action movies headlined by names like Stallone, Schwarzenegger, Norris, and Bronson. Sure, by and large, these movies may not be masterpieces but they still manage to pack a powerful entertainment punch nearly thirty years after their release. While there were some actors who leapt to the big times during this era, there were plenty of wannabes who never quite cut the mustard. Stalwart 'Karate Kid' bad guy Martin Kove was one such actor. In a bid to launch himself from bit player to leading man, 'Steele Justice' is an overbaked 80s casserole of genre cliches, and it proves to be a delicious feast for action junkies.

Vietnam was a hellish time for John Steele (Martin Kove). Sure he had his pet snake 3-Step and his best buddy Lee (Robert Kim), but he was also betrayed by General Kwan (Soon-Tek Oh). At the close of the war, General Kwan was supposed to be helping American and South Vietnam forces, but instead, he was in it to make off with millions of dollars in gold supplied by the CIA to fund the war. After Steele and Lee are are shot by Kwan and his forces, Steele is put under orders by his commanding officer Harry (Joseph Camanella) not to retaliate against Kwan - but that doesn't stop Steele from putting a knife in Kwan's chest.

Years later, Steele has become a burnout of a cop. Having never fully adjusted from the war, he's lost his job on the force and is estranged from his music video director wife Tracy (Sela Ward). At least he has his buddy Lee to fall back on. Lee and Steele both joined the police force together and were partners, so it's hard for Lee to see his old friend on hard times. Lee, his wife, and his daughter Cami (Jan Gan Boyd) do what they can to perk up Steele, but it's no use. Everything changes when Kwan turns up alive and his hot-headed son Pham (Peter Kwong) show up in town posing as legit businessmen. In fact, Kwan and his son are international drug traffickers bringing in millions of dollars worth of cocaine into the United States. When Lee is killed for investigating Kwan's dealings, it's up to Steele to settle the score the only way he knows how, with his snake 3-Step, a samurai sword, and enough firepower to level a city block. 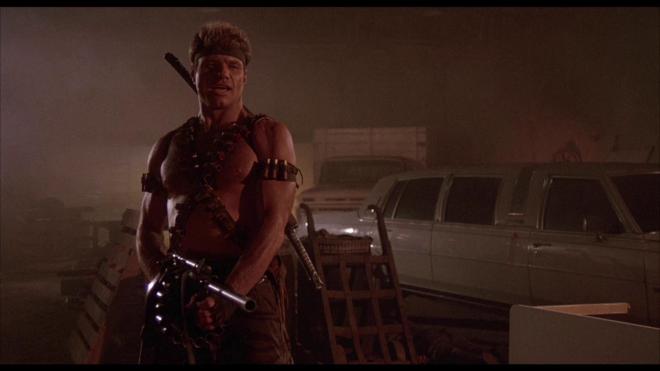 'Steele Justice' is pure, 100% all natural testosterone-fueled action cheese. From aspects of the Vietnam War to the rising cocaine problem in the country to big guns and ninja swords, 'Steele Justice' grabs everything it can from the tough guy action movies of the era and just runs hog wild with them. Written and Directed by Robert Boris, 'Steele Justice' tries to be everything and winds up not really being anything more than a ripoff of better movies. That doesn't mean this flick doesn't have anything going for it. By stealing from better movies, 'Steele Justice' manages to be an incredibly, ridiculously entertaining action farce that is never a dull moment.

Headlining this little gem is Martin Kove. As the man has had a consistent and steady career since the early 1970s, Kove never really jumped to leading man territory. He was always a villain or a side player. While he's probably best known for the 'Karate Kid' films and his long turn on 'Cagney and Lacey,' I remember him best as the dimwitted boxer Henry "Rocky" Welsh in the ultra cheesy 'Incredible Hulk' episode "Final Round" from 1978. It was true in that episode and it's stayed true for his entire career, Kove is an earnest hard-working actor. He really puts in a lot of effort to bring some character depth and nuance to his John Steele. He tries really hard to make the audience care about Steele's downturn onto hard times, but neither the script or the rest of the movie really cares all that much. Once Steele finds his reason to live by avenging his friend's death, he's all action finding bigger and bigger guns to blow away the bad guys with. With a few quips and a snake wrapped around his neck for good measure, Kove is a riot to watch.

On top of Martin Kove doing what he does best, 'Steele Justice' is loaded with any number of cliches, from Sela Ward as the distant but still loving wife to Bernie Casey as an untrusting but reliable cop, to Ronny Cox popping in with his usual angry police captain bit. Then there's a sword fight finale, that is so poorly shot and simply choreographed it's like watching two men performing a slow-moving dance routine with swords. When you start to add up all of the parts and pieces of 'Steele Justice,' it's actually shocking that this wasn't a Golan Globus Cannon Group release. This film would have fit perfectly within their wheelhouse. This film is a perfect Pizza and Beer adventure that should entertain a packed home screening room full of friends.

'Steele Justice' arrives on Blu-ray thanks to Kino Lorber and their Studio Classics line. Pressed onto a Region A locked BD25 disc, the disc is housed in a standard Blu-ray case and opens to a static image main menu featuring traditional navigation options with some incredible 80s action music. 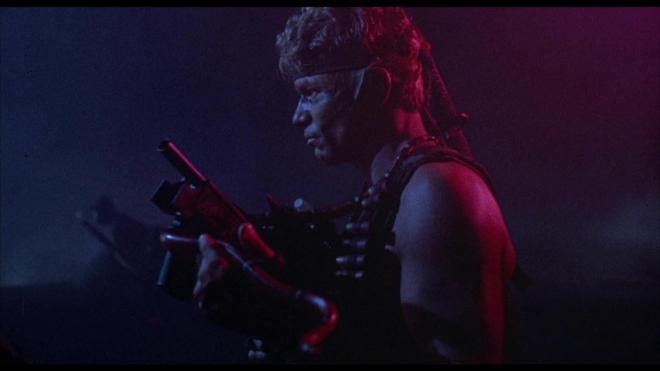 With a 1.85:1 1080p transfer, 'Steele Justice' actually makes a very pleasing jump to HD with this Blu-ray release. Film grain is readily apparent and free of any sort of noise reduction or smoothing. Colors are of an 80s pallet but still vibrant, particularly greens. Primaries have plenty of pop as well without pushing flesh tones out of skew, everyone looks healthy. Details are on the medium side, middles and closeups look the best, some wide shots look nice and show off the scenery, but this film tends to keep backgrounds out of focus so the audience can admire the numerous shots of sweaty faces and muscles. Black levels are stable without any contrast boosting of note ensuring that the image maintains a nice sense of depth. Aside from some mild speckling here and there, the print sourced for this transfer is relatively clean and undamaged. All around a very good transfer. 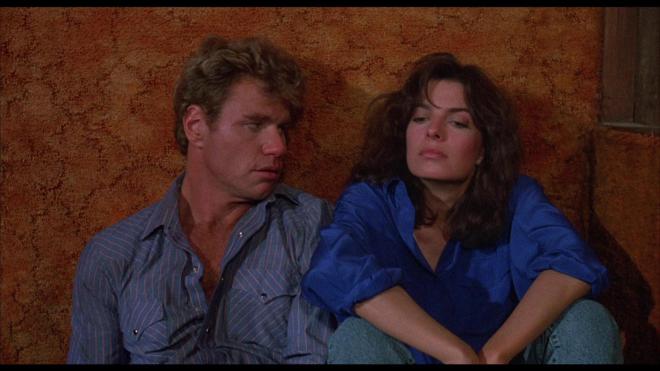 Fans hoping for a bass-rattling 80s action movie audio mix may be a bit of a let down by this DTS-HD MA 2.0 track. To put it simply, this mix just doesn't have any finesse. Dialogue is easy to hear, but just doesn't sound like it has a lot of life to it - there are several scenes that sound like they were dubbed over in post. Sound effects and backgrounds are present but on the dull side. Gunshots and explosions have their moments but the entire track tends to sound tinny and canned. There are also a few age-related issues, a slight hiss is present throughout and is most noticeable during the film's quieter moments and there are a few pops. Nothing that ruins the experience, you're not going to miss any of the hammy dialogue, but these anomalies are notable. 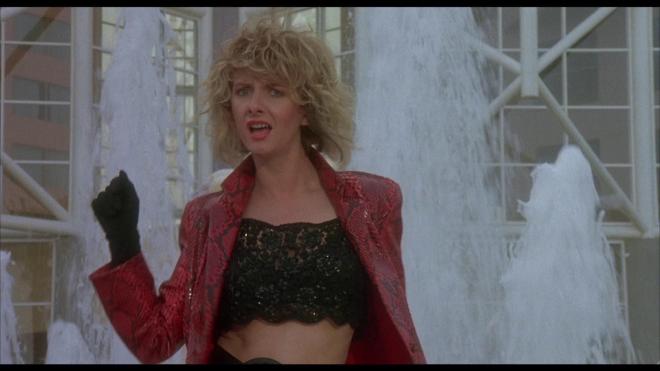 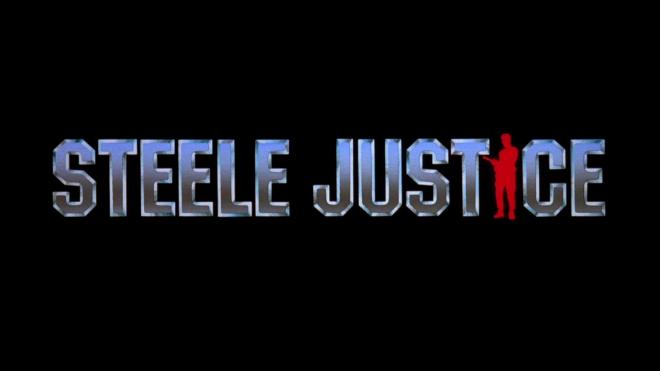 'Steele Justice' can hardly be considered top-quality cinema, but it's incredibly entertaining! Martin Kove brings his best to a film that is a hodgepodge of all the best goofy 80s action movie cliches. Kino Lorber brings 'Steel Justice' to Blu-ray in decent order, the image transfer looks pretty great, but the audio mix sourced for this transfer has some issues. Extra features are a collection of 80s action movie trailers. For a great piece of pizza and beer entertainment, 'Steel Justice' is worth a look.