Season two of The Last Ship begins with a cure for the Red Virus and the goal to save the human race. Navy Captain Tom Chandler and his crew return to the States unsure of what they will find. As the crew seeks to find survivors and their families, they encounter a new, emerging enemy who's vying for control and may hinder the mass production of the cure.

There's something comforting about a television program that knows what it is and doesn't try to be anything bigger or more important than it is. When I wrote a review for 'The Last Ship: The Complete First Season' I compared the show to being "good old fashioned junk food." After addictively plowing through 'The Last Ship: The Complete Second Season,' that assessment still holds true. This show is the off-brand cheese puffs of action entertainment. It may not be the best thing out there for you, but it is tasty and leaves you wanting to consume more of it.

When we last saw Commander Tom Chandler (Eric Dane), XO Mike Slattery (Adam Baldwin), Dr. Rachel Scott (Rhona Mitra) and the rest of the crew of the U.S.S. Nathan James, they had found the cure to the deadly virus that had ravaged the entire planet. However, they were now being held by the newly reformed U.S. Government headed by Amy Granderson (Alfre Woodard) who is fighting her own internal war with former police officer Thorwald (Titus Welliver). With the crew of the Nathan James under Granderson's control, they have no choice but to form a fragile alliance with Thorwald to ensure that the cure reaches the infected people of the world.

Once that situation resolves itself, Chandler and his crew set about the distribution of the cure to infected countries. What they don't expect is the rise of a militant cult of immune people to rise from the ashes of the old world. Their maniacal leader Sean Ramsey (Brian F. O'Byrne) and his younger brother Ned (Nick Court) have used the devastating Red Flu to unite survivors under the delusion that they are God's chosen and they are the rightful heirs to the planet. With a tactical nuclear submarine at their disposal, the Ramsey brothers could be the greatest threat the crew of the Nathan James has ever faced. Especially when the last man in the line of succession to the Presidency Jeff Michener (Mark Moses) is a believer in Sean's divinity. 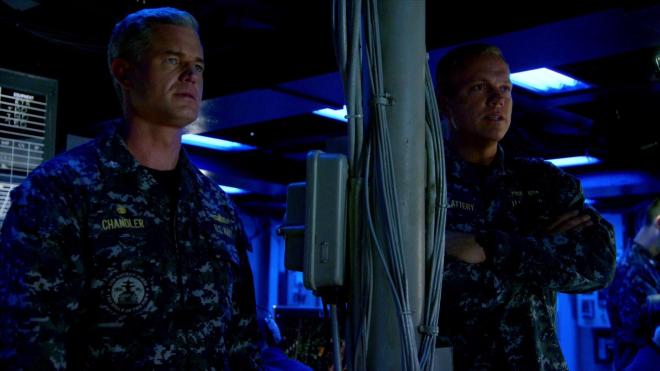 If you made it through Season One of 'The Last Ship' then you're well aware of how things ended with that season. A war was brewing between guest stars Titus Welliver's Thorwald and Alfre Woodard's Granderson and the crew of the Nathan James was going to be caught in the middle. If you were like me, then you naturally thought that this was going to be the basis for the entirety of Season Two. Unfortunately, those guest star turns by Titus Welliver and Alfre Woodard would prove to be just that, guest star visits.

While the more tantalizing opening story would have made for the perfect Season Two, what remains of the 13-episode run isn't half bad either. What's nice to see with this season is that the show has grown a little. It has found its focus by cutting away some of the deadweight story lines and keeping its eye firmly on Commander Chandler, Dr. Scott, and the cat and mouse action with the Ramsey brothers. It's exciting because the Nathan James is unmated in the fight and have to use every resource available to them. On top of that, they're also having to convince a growing number of people who believe they're chosen by God's will. It's some exciting material that helps the series become something genuine without outgrowing its pulpy roots.

Adding a little more weight to the show is a fantastic turn from Mark Moses as a guilt-stricken President of the United States. He carries a lot of the dramatic weight of the show as a conflicted man dealing with his own actions during the crisis and his place in the new world. He shares several great moments with Eric Dane that don't feel too forced or over-scripted. It hits the right tones without dipping too far into cliched eye-rolling dramatics.

As one would expect with a show produced by action mogul Michael Bay, the show keeps up the thrills and excitement of the first season with a better effects budget. While there is still some shoddy-looking CGI here and there, the moments where the actual warship and vehicles are involved in some action look fantastic. The penchant for hyper-kinetic gun battles is as prevalent as ever. And the new cast additions of Inbar Lavi and Bren Foster as foreign commandos adds a little more international flavor to this season as some of the side members of the ship's crew are explored in more detail.

'The Last Ship: The Complete Second Season' may not have started and finished with the story one would have expected, it does find some good material to stay afloat. In some ways it's better than the first season, in others, nothing much has changed. If you were already a fan of the show, you're likely going to stay that way all the way through Season Two. If you weren't a fan the first time around, I will say this second season is a bit better, but I don't think it'll win too many new fans. It's fun for what it is and shouldn't be thought about too much. Just turn your brain off and go with it.

'The Last Ship: The Complete Second Season' arrives on Blu-ray thanks to Warner Bros. home video. Pressed onto three BD50 discs, the discs are housed in a standard three-disc case with identical slip cover with each disc getting its own tray to occupy. Included inside is a flier with episode summaries. An Ultraviolet Digital Copy voucher for the entire season is also included. Each disc opens with a static-image main menu with the show's theme music playing in the background with traditional navigation options. Extra features are spread throughout three discs.

Shot with Red Epic Dragon cameras, Season Two maintains the same 1.78:1 1080p presence as the first season. Colors are bright and bold, especially primary saturation. Whenever combat situations arise, the red lights saturate everything nicely. Black levels are deep and inky and offer a real sense of three-dimensional depth to the image. The only stand-out shots that never quite look right are some day-for-night scenes and whenever an artificial background has been green-screened in, those are the only moments where the image quality doesn't quite pass the mustard. As great as this image can be from episode to episode, there seems to be a slight downgrade in detail quality. Oddly, finer details like facial features and especially in wide shots seems to be noticeably softer than before. I can't account for this as I took a look at Season One again to be sure I wasn't going crazy or something, but sure enough, it does look a tad softer. Not a terrible detriment as the show genuinely looks very good, but where I gave Season One a full 5/5, this one comes in a bit lower.

Season Two comes packed with a stable and aggressive Dolby TrueHD 5.1 audio mix for each episode. Dialogue is front and center and present when and where needed. But this isn't a show you came to see for its dialogue, you're here for the action. Gunfire, explosions, nondescript military commands echo around the mix beautifully. There is a constant presence of imaging that keeps the channels engaged at all times. Background effects and atmospherics do a great job of keeping the series sounding robust and spacious. Levels are well balanced and you shouldn't need to adjust the volume from scene to scene. As before, these are stellar audio tracks that do their job.

Inside the Episodes: (HD 36:17) Show creators and directors give each episode of the show a quick little behind the scenes look. It's not altogether informative, but it's better than nothing. I would have liked the audio commentaries to return because they were pretty good.

Vulture Team: (HD 33:42) As the most informative extra feature of the entire set, it covers strictly the characters who leave the Nathan James and inevitably get into death-defying gun fights and still somehow come out on top. Most of the interviews are with the creative team and some of the cast.

Exclusive Look: (HD 16:25) This is a collection of interviews with the stars of the show and the newcomers. Each interview is only a minute or two long and doesn't cover a lot of material. If you went to movie theaters anytime leading up to the airdate of this season, you likely saw a lot of this material already.

The Making of Season Two: (HD 4:09) As with the Exclusive Look extra feature, this is some pretty basic EPK stuff covering the challenges of shooting season two and trying to best the first season in terms of scale and authenticity.

If you were a fan of Season One, then you're likely already on board with the adventures of the Nathan James you'll get a kick out of 'The Last Ship: The Complete Second Season.' The show doesn't grow much, but it's found its comfort zone and still proves to be an entertaining time. Warner Brothers has brought the series to Blu-ray in fine form. While the picture quality is slightly off when compared to the first season, the audio thunders and impresses. Extra features aren't as robust as before, but they're still halfway decent. If you're a fan, a purchase is recommended.

Sale Price 26.54
List Price 39.99
Buy Now
3rd Party 5.9
In Stock.
See what people are saying about this story or others
See Comments in Forum
Previous Next
Pre-Orders
Tomorrow's latest releases