About a half dozen other tiny plots exist throughout the film. It would take far too long to mention them all here. 'Women in Trouble' isn't a cinematic revelation, but it's a well-constructed little drama that treats women as strong, independent characters and people. Here is a movie that may do well as a girls night in screening.

Gutierrez knows how to string the viewer along. It's entertaining, and frustrating at the same time. In a movie like this you'd expect copious amounts of nudity, but there isn't one instance of that. Plenty of lingerie, but the actual sexual nature of this show would only get a PG-13 rating if it weren't for the rest of the subject matter. 'Women in Trouble' does fail to acknowledge that not all women are built like supermodels, but that's Hollywood for you.

I found 'Women in Trouble' to be a delightful little movie, which contains some very witty and well-written dialogue. Sure, Gutierrez is living in a dream world where every woman - except for the young daughter, who is exceptionally portrayed by newcomer Isabella Gutierrez – is a supermodel in training. There are also some wonderful male guest appearances by Simon Baker ('The Devil Wears Prada') and Josh Brolin. The front cover says that Joseph Gordon-Levitt also makes a guest appearance, but for the life of me I couldn't find where he was featured. I have a sneaking suspicion that he's the guy who is mopping the floor at the very end of the movie. If that's Gordon-Levitt, what a ridiculous waste. Other than that tiny faux pas, 'Women in Trouble' can be enjoyed by both sexes, but I stand firm in saying that it will do well as a film for a girls night.

As a fairly low-budget affair, 'Women in Trouble' looks like what you'd expect. Nothing fancy, with some mistakes here and there. The 1080p/AVC encoded transfer is sub-standard when it comes to what we expect from high definition presentations. Although, having said that, it's no here as dismal as 'Dare' was.

Fine detail is really lacking here. Faces, patterns, and textures are all much softer than what is expected from HD. To say that black levels waver would be an understatement. They're constantly changing from inky, to gray, to a flickering mess. Colors are muted, with nothing really jumping off the screen. Skin tones are fairly consistent throughout, but every girl here looks a tad washed out. Original source noise specks invade the screen from time to time, but don't become overwhelming. Good news is that there's really no technical artifacts wreaking havoc here, it's just a muted, wavering transfer that won't come close to wowing you like other titles have in the past. 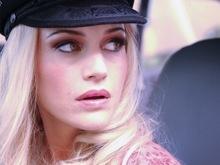 The 5.1 DTS-HD Master Audio presentation doesn't fare much better than the video. 'Women in Trouble' is a dialogue-based film, so it's a problem when the conversations run the gamut of clearly intelligible, to downright soft and canned. I found myself adjusting my center speaker more than once. Turn it up when the dialogue came out way too soft, and then back down when it was too loud. This becomes very troublesome, because you really want to hear what they're saying, but you don't want to be blasted with the sound when Guetierrez abruptly switches to one of his flashback sequences, which will deafen you if you're not careful. Surround channels are almost non-existent, except when a couple of characters go to a bar with a band playing. Other than that, ambient noise is nowhere to be heard. It's a shame that a movie with so much clever writing and great delivery of lines from the actresses is hampered with an audio presentation that kills the very voices you want to hear. 'Women in Trouble' is a fine piece of dialogue driven filmmaking from Sebastian Gutierrez. So what if this isn't exactly how women act or feel, I mean, this is L.A. we're talking about right? Too bad the video and audio don't do it justice. All these beautiful women and at times they're reduced to washed-out, blurry messes. A shame I tell you. Still I'm recommending readers check this for the movie alone, mostly because I just want people to see it, but also, I'm looking for anyone out there to show me where the hell Joseph Gordon-Levitt is in this film.

Sale Price 9.24
Buy Now
3rd Party 79.99
In Stock.
See what people are saying about this story or others
See Comments in Forum
Previous Next
Pre-Orders
Tomorrow's latest releases