Tim Matheson and Stephen Furst, the infamous Otter and Flounder of National Lampoon s Animal House fame, co-star in another rip-roaring college campus comedy as Bob and Gonzer, two less-than-collegiate students at Lepetomane University, better known as one of the world s worst institutions of higher learning. The University Dean (John Hillerman, TV s Magnum P.I.) has made these two cutups an offer they can t refuse degrees in the subject of their choices, if they can bring some long-awaited glory to their school by winning an intercollegiate white water raft race. That seems simple enough until they find themselves up against some heavy competition - in a race that leaves them Up the Creek! Wonderful direction by Robert Butler (Night of the Juggler) and featuring an hilarious cast that includes Dan Monahan, (Pee Wee of the Porky s Trilogy), Sandy Helberg (Spaceballs), Jeff East (Young Clark Kent, Superman) and James B. Sikking (TV s Hill Street Blues).

It can be a great day when you discover a hilarious comedy that you've never seen or heard of before. It's great because now you have something to eagerly share with other people and watch and laugh at all over again. However, when you discover a comedy that isn't funny on any level at all, it's just a depressing experience as you wait and long to laugh but the jokes never land. 'Up the Creek' is not only a sadly unfunny adventure comedy, its title also works as an accurate depiction of my emotional state as I watched this film.

Lepetomane University isn't known for producing world leaders, brilliant scientists, or literary thinkers. Instead, it is known as the single worst university in the entire country - which suits Bob McGraw (Tim Matheson) and his buddy Gonzer (Stephen Furst) just fine. However, as the annual intercollegiate white water raft race draws teams from some of the most prestigious universities in the country, Dean Burch (John Hillerman) sees an opportunity to not only rid his school of students like McGraw and Gonzer but also put Lepetomane University on the map.

With the promise that they'll get to graduate with a degree in any field of their choosing, McGraw and Gonzer head out for the rapids, how hard can white water rafting actually be? It turns out to be very hard indeed as the pair of slackers and the rest of their team come face to face with some of the stiffest competition out there. In order to win the day, they're going to have to use every trick in their unwritten book of hijinks and shenanigans. That is of course because McGraw is out to win the heart of Heather (Jennifer Runyon) who just happens to be the captain of a rival team.

Like so many bawdy 1980s comedies, 'Up the Creek' is a movie that piggybacks off of better movies doing everything it can to mimic films like 'Porky's' and 'Animal House' only it doesn't bring anything new to the table, making it feel like a desperate rehash of jokes we've already heard told by better talent. That isn't to say that this isn't a talented cast, both Tim Matheson and Stephen Furst proved they had the chops for comedy in 'Animal House,' John Hillerman may have been known for dramatic work but he had turned in some funny material for 'Paper Moon' and Mel Brooks' 'Blazing Saddles.' Sandy Helberg playing the nerdy Irwin is another example of a solid comedy actor who should have been great, but nothing comes from his efforts. 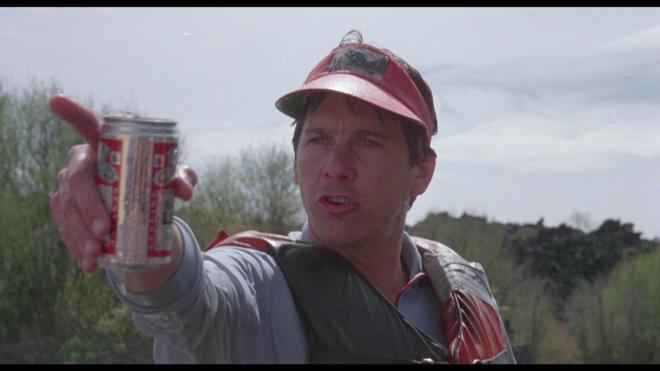 At the end of the day, this isn't a casting issue so much as it is the limp script by Jim Kouf and the direction by Robert Butler. So many of the jokes, so many of the sight gags, so many of the setups for humor fail to land at such a regular rate that it makes you wonder why nobody on this production stopped to think if this film was working or not. This isn't to say that all of the jokes are complete duds, but so many of them fall flat with obvious setups and payoffs that as the movie progresses it becomes harder and harder to enjoy what you're watching. Not helping matters is that nearly half of the movie is over before a single raft reaches the water making one wonder what the point of everything we saw for the first 45 minutes was all for.

As a child of the 1980s, comedies from this era are among my favorites - mostly because at the time of their initial release I was too young to see them. As I've gotten older and the rating restrictions preventing me from watching a movie were removed, I've delighted at discovering a number of comedic gems. When I heard that 'Up the Creek' was making a debut for Blu-ray I was initially excited because it was a title I'd heard of but never managed to sit down and take a look at. Perhaps I'm being a bit hard on it, I'm sure there are some folks out there that like this film, but I'm just not one of them.

'Up the Creek' arrives on Blu-ray thanks to Kino Lorber and their Studio Classics line. Pressed onto a Region A locked BD25 disc and housed in a standard Blu-ray case. The disc opens directly to a static image main menu with traditional navigation options.

With a 1.85:1 1080p transfer, 'Up the Creek' makes a fine Blu-ray debut. With enough fine film grain visible, this transfer would appear to have been struck from a recent master. Detail levels, color, and black levels are all appreciable in their own ways and make this image very bright and pleasing to look at. The print sourced for this transfer was in pretty great shape, only mild speckling and some slight judder during the opening credits keep things from looking truly perfect for a deep catalogue title like this one. Colors are bright and once the show moves to the rivers and rapids it looks fantastic allowing for plenty of primary pop. Details are appreciable allowing fine facial features, scenery details and the wonderfully dated 80s apparel to come through without a hitch. There are a few scenes that look rather soft, but I would wager those are backed into the film itself rather than a transfer problem.

Featuring a standard DTS-HD MA 2.0 audio track, 'Up the Creek' is a relatively flat and lifeless audio mix. Dialogue is clear and easy to hear but it also has a canned sound like it was dubbed over in post-production. The pop chart-topping songs of the era come through loud and clear but aren't intrusive enough to overpower the mix. Sound effects are present, but again, they have an unnatural sound to them keeping them from sounding like they were recorded naturally - this is especially noticeable during the rafting scenes where even during the calmer moments it just feels like you should be hearing more than you actually are. I guess for a comedy of this era this audio track gets the job done, it's just not very impressive.

Without A Paddle: (HD 11:37) This is a pretty short, but actually pretty decent making of bonus feature with interviews from stars Stephen Furst and Sandy Helberg and casting director Harriet Helberg.

I'm more than willing to admit that 'Up the Creek' just wasn't the movie for me. The humor and the type of jokes this movie had to offer just didn't land for me. Just the same, Kino Lorber has brought this Blu-ray together with a pretty great looking image transfer and a serviceable audio track as well as a decent couple extra features. Fans of 'Up the Creek' should be happy with this release, if you're new to the movie it's a rent first sort of experience, a blind buy is a tall order.

Sale Price 16.8
List Price 29.95
Buy Now
3rd Party 22.3
In Stock.
See what people are saying about this story or others
See Comments in Forum
Previous Next
Pre-Orders
Tomorrow's latest releases