Jane Got a Gun

Jane Hammond (Natalie Portman) has built a life on the rugged western plains with her husband Bill "Ham" Hammond (Noah Emmerich) and young daughter. When Ham stumbles home riddled with bullets after a run-in with the relentless John Bishop (Ewan McGregor) and his gang, she knows they will not stop until her family is dead. In desperation, Jane turns to Dan Frost (Joel Edgerton), a man from her past, for help. Haunted by old memories, Jane's past meets the present in a heart-stopping battle for survival.

When a production is "troubled," it's hard not to view the final film through the goggles of suspicion and curiosity. On one hand you legitimately hope that the movie somehow managed to survive the chaos and come out on top. On the other hand, you can't help but wonder if the film is a dramatic train wreck of 'Fantastic 4' scale. Actress and producer Natalie Portman's passion project 'Jane Got a Gun' is one such troubled production. While not a complete train wreck, the final film isn't nearly as good as it very easily could have been.

Jane Hammond and her young daughter are in a tight spot. When her peaceful yet outlaw husband Bill (Noah Emmerich) arrives back at their rural New Mexico ranch with four bullets in his back, Jane knows trouble is coming for them and his name is John Bishop (Ewan McGregor). Bill used to be a part of John Bishops' outlaw band, but in order to rescue Jane after she was sold to a whorehouse and her daughter presumably murdered, he had to kill four men and a $5,000 bounty was put on his head. The last few years have been peaceful as Jane and Bill settled in together and brought up a child of their own, but now John has an idea where Jane and Bill are and he's hellbent on putting a bullet into the back of his former friend and partner.

With a husband riddled with holes and a small daughter to defend, Jane turns to the one man she knows she can trust, her former fiancé Dan Frost (Joel Edgerton). Even with the bad blood and painful history between them, Dan sets his wounded heart aside to help the woman he once loved. As a famed war hero, Dan has a deadly knack for combat strategy, knowing full well where and how a battle is fought is more valuable than the number of men you have on your side. With only one way to the property, Jane and Bill's home becomes the perfect outpost to let John and his gang of marauders ride up to the slaughter. Even with the best possible preparations made, Jane, Bill, and Dan will have to work together if they hope to survive John's villainous designs. 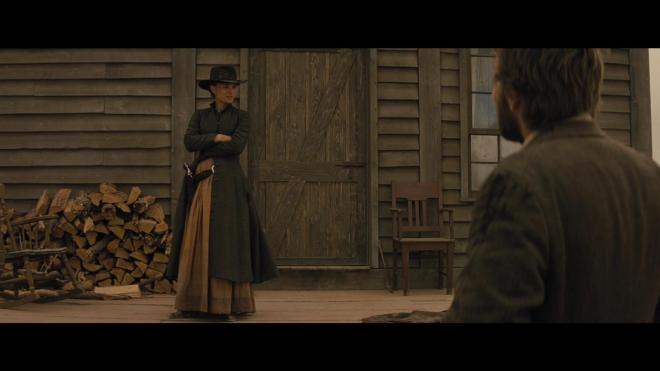 Before I get into my analysis of 'Jane Got a Gun,' I feel it's important to detail the goings on of the troubled shoot. Just when Natalie Portman was just about to get her passion project off the ground, her costar Michael Fassbender who was to play Dan Frost quit the film due to frequent clashes with original director Lynne Ramsay. As a result, Joel Edgerton who was originally supposed to play John Bishop took over the role of Dan Frost and Jude Law signed on for the John Bishop role. The day shooting of the film was to commence, Director Lynne Ramsay didn't show up for filming and quit the project because of issues with producer Scott Steindorff. Because Ramsay quit, so did Jude Law. Without a director or an actor to play the villain, Joel Edgerton busied himself doing rewrites of the script and brought in his frequent collaborator Gavin O'Connor to direct. Once Ewan McGreggor signed on to play John Bishop, the production was back up and running. That was in 2013. For three years this film sat on a shelf and was finally released in limited distribution before arriving on home video.

I detailed all of that information about the production of 'Jane Got a Gun' because it would have made for a more interesting movie than the final result. That isn't to say that 'Jane Got a Gun' is a bad film, it isn't, it's just not nearly as interesting or dramatic as the story of what it took to get the film made in the fist place ultimately is. Part of what drags 'Jane Got a Gun' down is there isn't any sort of character arc for Natalie Portman's Jane. When we meet her she's a hardened frontier woman with a history. She knows how to use a gun, she knows how to defend herself, she knows that bad winds are coming her way and she does what she has to do to survive. Granted, through frequent flashbacks we do get to see Jane's life before things got so bad when she was so madly in love with Dan, but that material is irrelevant to the story we're seeing. It's implied, it isn't something we need to see, and yet the film repeatedly stalls the buildup of tension to feed us another flashback.

At a slim 98 minutes in length, there is a lot of buildup for a big final showdown that never really materializes in a satisfying way. It's over just as soon as it starts and left me wanting a lot more movie than I got. Part of that problem is we never really get to know anyone beyond the surface material nor are we really given a reason to care whether or not Jane, Dan, or Bill even make it out of the fight alive. We are also given so little information about Ewan McGregor's John Bishop or why he is evil that we never really feel him as much of a threat. His status as an outlaw is also confusing and opens up a whole can of plot holes that aren't resolved in a satisfying way. Perhaps the best way to describe 'Jane Got a Gun' is by picturing 'Open Range' without the time spent getting to know and like Boss and Charley or without having a reason to fear Denton Baxter and his gun hand Butler so the big final showdown would be without any weight or suspense. We want Boss and Charley to live. In 'Jane Got a Gun' we're left rooting for characters we don't really know and it makes it difficult to care about them. 'Jane Got a Gun' is a well-meaning film that tries very hard to be something, but the final result just isn't special. It isn't terrible, it has its moments, but it doesn't rise above an unfortunate level of mediocrity.

'Jane Got a Gun' arrives on Blu-ray thanks to Anchor Bay. Pressed onto a BD25 disc, the disc opens up to a trailer for 'The Hateful Eight' for other Anchor Bay releases before arriving at the main menu featuring standard navigation options. The disc is housed in an eco-friendly Blu-ray case that comes with a Digital HD Ultraviolet voucher slip.

Presented with a 2.40:1 1080p transfer, 'Jane Got a Gun' makes the old west look pretty darn fantastic. Shot on 35mm, the image retains a faint but visible grain structure that gives the image a pleasant film-like appearance. Details are abundant from fine facial features and costuming to the beautiful New Mexico scenery. Everything on screen looks absolutely amazing. Colors skew towards the warmer yellow earth tones, primaries maintain some strong presence but tend to be a bit subdued. Black levels are rich and inky giving the transfer a nice sense of depth to it without any crush issues to report. All around this is a pretty great looking transfer that brings the old west to life.

'Jane Got a Gun' enjoys a strong and pronounced DTS-HD MA 5.1 audio mix. With a lot of wide open landscape scenes, this track maintains a beautiful sense of space and dimension. Imaging is equally fantastic providing plenty of channel movement, especially when a character is off in the distance and rides up closer to the screen. Dialogue is clean and clear to hear throughout without any interference from the abundant atmospheric sound effects or the score by Lisa Gerrard and Marcello De Francisci. The track keeps to the midranges but the score's lower tones and the heavy blasts of gunshots keep the lower tones alive and present throughout. Levels are also set perfectly and there wasn't ever any need to adjust the volume to compensate for any lulls or drop offs.

'Jane Got a Gun' is a movie with a reputation, unfortunately that reputation is for being the product of a troubled production and not for being a bad movie. It's not a bad film, but it isn't a great one and it very easily could have been great if the plot and characters were a little cleaner so that its cast could showcase their talents. Anchor Bay has brought 'Jane Got a Gun' to Blu-ray with a stellar image transfer and an impressive audio mix. Sadly this disc is completely absent of any extra features of any kind. 'Jane Got a Gun' is worth a look.

Sale Price 3.26
Buy Now
3rd Party 39.99
In Stock.
See what people are saying about this story or others
See Comments in Forum
Previous Next
Pre-Orders
Tomorrow's latest releases