A Spectacular and Brawling Adventure! Hollywood legends Kirk Douglas (The Devil's Disciple), Tony Curtis (Taras Bulba), Ernest Borgnine (Marty) and Janet Leigh (Psycho) dazzle in this epic chronicle of brutal rivalry and bloodthirsty ambition. Roaring through the 9th century with powerful performances and brilliant visuals, The Vikings is a riveting spectacle. Bitter hatred divides two brothers. Prince Einar (Douglas) is the son and heir of a savage Viking chieftain. Prince Eric (Curtis) is his unknowing half-brother, the bastard offspring of Einar's father and an English queen. When the Vikings kidnap a princess Morgana (Leigh), her beauty inflames the desires of both men, forcing a bloody duel that decides their fate... and the future of the English throne. Beautifully shot by the great Jack Cardiff (Black Narcissus, The Red Shoes) and wonderfully directed by legendary filmmaker Richard Fleischer (Mr. Majestyk, The Spikes Gang). The stellar cast also includes James Donald (The Great Escape) and Alexander Knox (Wilson) Narrated by Orson Welles (Touch of Evil).

There's something magical about a classic adventure film that modern films of the genre don't seem to match. It could be that for some of these classics, historical accuracy wasn't as important as telling a fun and adventurous story with big name actors playing a bit of dress up. 1958's 'The Vikings' directed by Richard Fleischer starring Kirk Douglas, Ernest Borgnine, Tony Curtis, and Janet Leigh is a true classic action adventure film that captures the magic of films that would have featured Errol Flynn's name on the marquee twenty years earlier.

Before England was a powerful monarchy under the control of a single family, there were several factions warring for control of the country. The Viking warriors under the leadership of Ragnar (Ernest Borgnine) have taken to plundering various villages and attacking caravans exploiting this era of internal conflict. After one such attack leaves the king of the northern regions dead and his queen pregnant at the hands of Ragnar. With no heir to the throne, the king's brother Aella (Frank Thring) ascends to the throne. He is a brutal man dead set on capturing Ragnar, even if it means the sacrifice of his people. The Queen flees with her child in hopes that even though he may be the son of Ragnar, he should ascend to the throne and rule northern England. After twenty years of brutality, men like Egbert (James Donald) have willingly aligned themselves with Ragnar if it means putting the end to the tyranny they face at the hands of Aella.

When Egbert is forced to flee England he is greeted with open arms by Ragnar and his boisterous son Einar (Kirk Douglas). It is there in the Viking village where Egbert meets the young Eric (Tony Curtis) a man of dark complexion with a striking similarity to the departed former Queen who has lived as a slave his entire life. Could this be the long missing true heir to the throne? When Einar kidnaps Aella's future bride Morgana (Janet Leigh), the English and the Vikings arrive at the threshold of all out war. It is only through a fragile alliance between Einar and Eric that the Vikings may win the deadly battle to come. 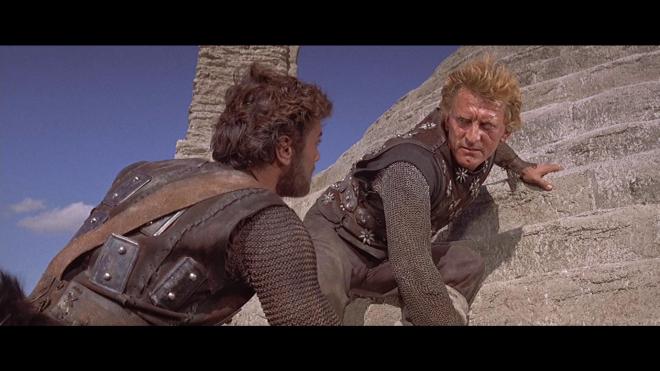 While 'The Vikings' can feel a little too costume cheese in the early goings, once the main story gets rolling, the film proves to be a wild and exciting time. There really isn't any point in nitpicking historical accuracy because that's not this movie's intention at all. It's not here to tell you a grand tale of real life heroes and villains against a historical backdrop. This movie isn't here to endow the audience with an understanding of medieval culture or history, it's there to entertain and allow it's primary cast of Kirk Douglas, Tony Curtis, and Ernest Borgnine to show off their action movie muscles. As a result, 'The Vikings' proves to be two hours of solid fun.

One thing worth noting that I found hilariously fun is the fact that Kirk Douglas is older than Ernest Borgnine who is supposed to play his father, but you wouldn't know it from watching these two great actors play off of each other. With enough long hair and an amazing shaggy beard and enough grit, Borgnine is convincing and a blast to watch.  As much fun as the rest of the movie is, it's Kirk Douglas that appears to be having the best time, especially once his character becomes blinded in one eye, Douglas looks like he really enjoyed the makeup and how fearsome it made him appear and he goes all out with his character.

As Eric the slave with a secret past, Tony Curtis delivers a fine performance. I'm usually 50/50 when it comes to movies starring Tony Curtis because of his tendency to put himself ahead of the film. He's always given terrific performances but he liked to make the movie about Tony Curtis rather than playing a true character. Here, Curtis becomes a believable Eric who grows up hating the Vikings and his captors but when faced with condemning one to death he shows the man the greatest respect and allows him to die a warriors death. I'm being purposefully vague at this point because it's a bit of a spoiler, but when you see the film you'll know the moment I'm talking about because it's a hell of a great scene played amazingly well by two fantastic actors. It's also interesting to watch Curtis play alongside his then-wife Janet Leigh. The two share an obvious chemistry together but given the tumultuous end to their personal relationship and how their feud was a thing of Hollywood legend, it's interesting to see them on screen together actually looking adoringly at one another.

Taken as a whole, 'The Vikings' is a great piece of classic entertainment. it starts out a little rough, the costumes have that odd late 50s hyper colorization and some of the sets feel like paper mache fabrications, but once things move to the Viking village and the movie gets out of first gear, the ride is worth it. It's not often you get many movies this fun featuring this many Hollywood legends, but 'The Vikings' features Kirk Douglas, Tony Curtis, Ernest Borgnine, and Janet Leigh in fine form during the peak of their careers.

'The Vikings' arrives on Blu-ray thanks to Kino Lorber and their Studio Classics line. Housed in a standard Blu-ray case, the film is pressed onto a Region A BD25 disc and opens directly to a static image main menu featuring traditional navigation options.

With a beautiful 2.35:1 1080p transfer, 'The Vikings' makes a terrific voyage to Blu-ray. Beyond appreciating the finer details of the costuming, at first, it may be a bit difficult to see where the production benefits from such a strong HD transfer, but once the film opens up to some location sets, it becomes a lot easier to appreciate the upgrade in image quality. With film grain intact, the image boasts strong detail levels allowing the audience to take in all the finer aspects of the rich production design facial features, makeup effects and the rough and rugged Viking costumes. Colors are also bright and vibrant allowing for the primaries to dominate the screen. Black levels are deep and inky and allow for a strong sense of depth. Without any crush issues or any kind of compression artifacts of note, this is a splendid looking transfer sourced from a relatively clean print that only has a few moments of noticeable speckling.

With a DTS-HD MA 2.0 mix, 'The Vikings' makes for a strong if slightly strained auditory presence. As such a dialogue driven film at the beginning, the mix can sound and feel a bit too front-loaded without any presence from the score or background sounds to give it any balance. Thankfully once the film breaks away from the opening moments in the English castle the film becomes a fuller and richer auditory experience. Every now and again some slight hiss can creep into the track during the film's quieter moments, but thankfully those moments are few and relatively far between. During the big Viking invasion action climax, the track is wonderfully loud and adventurous as the dialogue, sound effects and the score are perfectly layered. To that end levels are perfectly balanced to handle the film's high and low ends without any need to monitor your volume.

A Tale of Norway: (SD 28:16) This is an interview director Richard Fleischer participated in 2002. It's a fantastic interview as the veteran director goes into all of the various aspects of the film from shooting on location in Norway to casting to having the cast and crew live together on ships.

If you're hungry for a classic Hollywood action and adventure film that doesn't take itself too seriously to be fun, 'The Vikings' should fit the bill nicely. With a great cast and rich production values, there's a lot to appreciate here. Kino Lorber has done a great job bringing this film to Blu-ray with a beautiful image transfer and a strong audio track. In addition to a great interview with the director, the extra features are made up of a collection of trailers. For those looking for something exciting and entertaining, consider 'The Vikings' recommended.

Sale Price 15.79
List Price 29.95
Buy Now
3rd Party 15
In Stock.
See what people are saying about this story or others
See Comments in Forum
Previous Next
Pre-Orders
Tomorrow's latest releases