Who Is Harry Kellerman and Why Is He Saying Those Terrible Things About Me?

This cerebral, quirky comedy explores midlife crisis through a rock-music composer's perspective. Screen legend Dustin Hoffman (The Graduate) plays a neurotic songwriter at the peak of his career, can't seem to love anybody - least of all himself. He becomes increasingly depressed as his delusional paranoia - fueled by a mysterious stranger who has been bad-mouthing him. Even his therapist (Jack Warden, The Verdict) can't seem to help. However, when he meets the eccentric, aspiring actress (Barbara Harris, The War Between Men and Women), he realizes it's his last chance for true love. For his role as the prolific singer-songwriter, Hoffman performed live (in character) with Dr. Hook & The Medicine Show at the iconic rock palace, Fillmore East, in New York City. Comedy great Dom DeLuise (Blazing Saddles, Silent Movie) co-stars in this cult classic directed by Ulu Grosbard (True Confessions). Barbara Harris was nominated for a 1972 Best Supporting Academy Award for her wonderful performance. 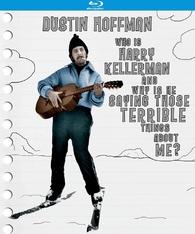 What makes a movie a movie? If you watch enough films, after awhile you start to recognize that each filmmaker does things a little differently to make a film their own. It's the entire premise of the Auteur theory that views the director as an artist with a distinct voice and the resulting film as an extension of that voice. While that may be true for some directors, I don't believe it's true for all. So when I start to have a hard time defining what makes a movie in a particular case, I look for what the actual point of the film is. If there isn't a point to what I'm watching then I become disengaged and irritable because I feel like I'm wasting time. Big blockbuster movies, as well as small arty films, are guilty of personal indulgences and as a result, the final product suffers. 'Who Is Harry Kellerman and Why Is He Saying Those Terrible Things About Me?' works to put its lead star Dustin Hoffman front and center, but Director Ulu Grosbard and screenwriter Herb Gardner didn't appear to have a clear idea or intention what the film ultimately was going to be, so it becomes an exercise in indulgence.

Georgie Soloway (Dustin Hoffman) is a successful, chart-topping pop songwriter and musician. He's got it all at his fingertips, fame, fortune, beautiful women and yet, he's an emotional wreck. As his psychologist Dr. Solomon Moses (Jack Warden) has helped him come to understand, Georgie doesn't know how to love. He can't love himself, he can't love other people, and he can't love what he does in life. With Georgie's mental state deteriorating rapidly, he searches for any form of validation for his life. He steals a magazine he's featured in, he calls up his dream girl Allison (Barbara Harris) at all hours of the night, he can't write new songs, in short, he's a wreck. As his downward spiral progresses, Georgie is dogged by someone who goes by the name "Harry Kellerman" who seems to be going out of his way to inexplicably smear Georgie in the press and tell his friends horrible stories. With suicide being the only conceivable way out of his unhappiness, Georgie isn't even sure he can do that well enough to be effective.

Have you ever watched a movie that just feels like it should have been a one act short film but for some reason lasts around 90 minutes too long? 'Who Is Harry Kellerman' plays like that. The opening moments of watching Dustin Hoffman as Georgie Soloway attempt to write a suicide note, think he has it, leap to his death but then feel the need to edit it and rewrite it on the way down had me doubled over with laughter. I thought I was going to be in for a treat of a dark comedy with a fantastic soundtrack featuring songs by Shel Silverstein. Instead, what 'Who Is Harry Kellerman' ultimately becomes is a great opening scene with a fantastic soundtrack followed by a thin and uninteresting dramatic comedy that is neither dramatic nor funny.

Perhaps the biggest issue facing 'Who Is Harry Kellerman' is that Dustin Hoffman is so good in it. I know that sounds like an odd complaint to have with a film, but when it's the only defining characteristic of the movie, there's little to fall back on. This film could easily have been retitled 'Dustin Hoffman Acting: The Movie' and it would have been an accurate description. Hoffman looks to have worked with only a bare outline of a script and his efforts are impressive, but they don't make a movie. Even the sympathetic characters like Jack Warner's Dr. Moses or Barbara Harris's aspiring actress Allison have little barring on the film's outcome. It's all about Dustin doing his thing, which, admittedly is damned impressive, but it doesn't make a full worthwhile experience. This would have been something if it was a one-man stage play, but as a 108-minute movie, it's a bit slim.

'Who Is Harry Kellerman' is a well-acted movie with a great soundtrack. I don't want to dissuade the curious Hoffman fan from checking this one out, but at the same time, I'm having a difficult time recommending it. It would have been something if there was more of a story or a plot thread to attach yourself to, but this movie pretty much peters out with the first visit with Dr. Moses. After that, the conversations just become repetitions of a theme of how Georgie can't love until he loves himself. This would be interesting material if it went somewhere. Ironically after the suicide dream sequence opening, it all goes down from there.

'Who Is Harry Kellerman' arrives on Blu-ray thanks to Kino Lorber and their Studio Classics line. Pressed onto a Region A BD25 disc, the disc is housed in a standard Blu-ray case and opens directly to a static image main menu.

'Who Is Harry Kellerman' is given a decent, not amazing 1.78:1 1080p transfer. The 70s color pallet is the real star of the show featuring strong primaries and even flesh tones. There is some fading here and there but it appears to be intentional as during certain moments the color flourishes. Film grain is present without appearing overly noisy, but the film's soft photography style keeps a lot of the finer details from showing through clearly. The print is in decent shape, some mild speckling that really is only apparent during the opening credits and any optical effects. Black levels can be a tad thick, there are some inky moments that give the image a notable sense of depth, but there are also some crush issues as well. Edge enhancement is apparent from time to time, obvious banding being the worst offender. All around this is a decent looking film, not an amazing transfer, but fans should be happy.

Where 'Who Is Harry Kellerman' struggles a little with it's DTS-HD MA 2.0 audio mix. It's a bit tinny in some scenes that take place in rooms with high ceilings. Sound effects are pretty even throughout the run of the film, but there are some moments where levels can fluctuate making things sound a bit too sharp and then flatten out. The big concert performance moment featuring Dr. Hook & The Medicine Show sounds pretty decent, but even then the quality isn't amazing as it feels very flat as it would seem to have been recorded in the moment with portable equipment. Dialogue is solid throughout so there really isn't a need to adjust levels, but I would set them a bit higher than what you normally would. Not a terrible mix, but not amazing either. At least the Shel Silverstein songs come through well!

'Who Is Harry Kellerman and Why Is He Saying Those Terrible Things About Me?' starts out well enough but the following film can't maintain the creative dark humor that it opened with. Dustin Hoffman is amazing in with the slim material he's given to work with, he often looks like he's making it up on the fly, which is pretty cool to see, but it doesn't make an amazing movie either. Kino Lorber has put this film to Blu-ray with a decent enough A/V transfer and a trailer for a different movie round out the extra features. This was a movie I wanted to like a lot but it just didn't do if for me. If you're curious, give it a rent, a blind buy is tough to recommend.

Sale Price 24.49
List Price 29.95
Buy Now
3rd Party 8.97
In Stock.
See what people are saying about this story or others
See Comments in Forum
Previous Next
Pre-Orders
Tomorrow's latest releases