Some movies just don't know when not to be clever. You could be watching a very good movie, a plot that is working, characters that are compelling and situations that are building tension and maintaining suspense. Then all of a sudden the writer gets clever by tossing in a third act twist that comes out of nowhere and completely upends everything you've seen up to that point. This lazy attempt at being clever can outright ruin a movie. Such is the case with 1946's 'The Chase' Directed by Arthur Ripley, written by Philip Yordan and starring Robert Cummings, Michéle Morgan, Steve Cochran and Peter Lorre. The film is 2/3 of a great movie with an unnecessary third act twist.

It's hard times for Chuck Scott (Robert Cummings). He's been on hard times ever since he returned home to Miami from the war. Work is scarce and he hasn't eaten a real meal in days. As he stands outside of a diner fantasizing about the delicious breakfast foods he sees cooking on the kitchen skillet, he spots a wallet resting on the ground. Picking it up he discovers there is over eighty dollars in cash inside! At first, Chuck sees it as a means of starting a new life, a man can buy some pretty tony clothes and eat a lot of good meals on that kind of spread. But, being the honest man that he is, his conscience gets the better of him when he spots the name Eddie Roman on a card inside. After enjoying a simple breakfast, Chuck does the right thing and returns the wallet.

Judging from the layout of the mansion, Eddie Roman is clearly doing well for himself. At first, Chuck has to jump through some hoops to meet Eddie, needing to get past his frontman Gino (Peter Lorre). When he finally meets Eddie (Steve Cochran), Chuck seems to have made a good impression. After all, not too many folks on tough times like Chuck would hike all that way to return a billfold full of cash. To return the favor, Eddie offers Chuck a job as his driver. Now with life looking up for Chuck, things only gets more complicated when he falls for Eddie's wife Lorna (Michéle Morgan). Lorna virtually lives as a prisoner in that mansion. Eddie has a quick temper and is involved with any number of illegal activities, so crossing him isn't the best idea. But when Lorna pleads with Chuck to take her away, the pair make a run to Havana hoping they've outsmarted Eddie and his long and deadly reach. 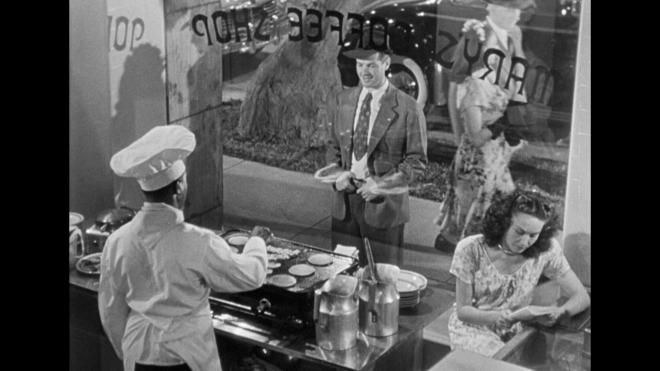 It's very frustrating to get excited about watching a movie and then have that excitement suddenly dashed by bad writing. 'The Chase' was a fantastic noir thriller for the first hour of its run. The audience is slowly introduced to the characters, you learn all the stakes, you start to empathize with Lorna and Chuck and you're hooked for their ride. When their escape to Havana starts to go bad, you feel tense and worried about their fate as Eddie and Gino close in around them. Then the movie switches gears entirely and upends everything you've just seen with one of the absolute worst uses of "it was all a bad dream." I normally wouldn't toss out a spoiler such as that, but it's impossible to discuss how bad the last half hour of the film is without mentioning it.

Watching that twist unfold is like having your chair pulled out from under you while you try and sit down to dinner. You go from thinking you're about to enjoy something nice to landing flat on your backside. To be fair, the film sort of builds up to this moment, but not in a way that makes it convincing. Instead, it relies on a reveal of a habit of Chuck's that makes him become a rather questionable leading character. The final half hour feels like the writer tossing every thriller cliche at a wall and then writing down the ones that stuck. Perhaps if the film had been a bout twenty minutes longer at the front end, introduced some important characters earlier, and maybe lead up to the twist in a different way, 'The Chase' might have worked in the end. As it stands, it's 2/3 of a great thriller that completely falls apart in such a disastrous fashion that it left me and my wife in a state of disbelief. While some people may pick up on some of the pieces to this puzzle earlier than most, it still doesn't help the third act twist be any easier to digest. Overall I enjoyed most of the film, even though I didn't like the twist to the ending, I was still hooked enough to follow it through. That twist will either pull the audience in or push them away.

'The Chase' arrives on Blu-ray thanks to Kino Lorber and is pressed onto a Region A BD25 disc. Housed in a standard Blu-ray case, the disc opens directly to a static image main menu with traditional navigation options.

As the film starts up, it opens with a number of credits thanking those involved with the restoration effort. Judging from what appears to be a cobbled together print, Kino Lorber along with UCLA Film and Television among other contributors worked very hard to put the best presentation forward for this film. Holding to it's original 1.33:1 aspect ratio, this 1080p image is a bit hit or miss at times, but it's no doubt the best possible presentation available. Print damage is the primary culprit on display as there are numerous instances of scratches, some slight fading, flicker, and mild to slightly heavy speckling running throughout the film. Film grain has been retained throughout giving the image a pleasing presence of detail. Black levels and the film's grey scale are pretty stable. Some darker scenes are spoiled by moments of flicker but there aren't any serious crush issues or blown out contrast levels to contend with. When you consider the age of the film and the amount of work that went into it, this transfer isn't half bad. Certainly not the worst thing out there.

'The Chase' arrives with a stable and decent English DTS-HD MA 2.0 mix. Like the video, it can sound a bit cobbled together, moments of hiss fade in and out and depending on the scene levels can get a tad loud with a bit of distortion, but it's not altogether bad. Those moments are very brief leaving the rest of this track to handle the even conversations well enough without hampering any of the dialogue. The music is a little off-putting at times, sometimes it can sound a bit too shrill, but otherwise the mix is well balanced. There are a few pops here and there, but no dropouts to speak of. Like the video, it's about as good as it can get.

Audio Commentary: Filmmaker Guy Maddin offers his thoughts on the film and provides an interesting few bits about the production. It's a solid commentary and he does well with explaining through the film's subtleties.

The Black Path of Fear: You get two radio adaptations of the original source novel done in 1944 (29:21) and another one from 1946 that features Cary Grant (26:48) These are actually pretty good versions of the story and given their runtime they actually work a bit better than the main feature film.

'The Chase' was just too clever for its own good. While most of the film is pretty suspenseful and entertaining, the last act change-up may leave some audience members out in the cold. It's not a bad movie, just not as good as it could have been. Kino Lorber has done a decent job bringing the best possible video and audio presentation to disc. The extra features are a bit slim, but the radio play versions of the story are actually very entertaining and worth the listen. Give 'The Chase' a rent. You may like it, you might not, a blind buy is a tough sell.

Sale Price 19.99
List Price 29.95
Buy Now
3rd Party 14.14
In Stock.
See what people are saying about this story or others
See Comments in Forum
Previous Next
Pre-Orders
Tomorrow's latest releases