The Little Girl Who Lives Down the Lane

Rynn Jacobs lives down the lane in her big old house alone...or does she? Soon, the landlord and her child molester son start insinuating themselves into Rynn's life asking questions. This may soon prove fatal for them both!

It can be a wonderful thing to look back at an actor or actress' first steps towards becoming a powerhouse performer. There have been a number of child stars over the course of Hollywood history. Some have flamed out. Some continue to work but maybe switched towards directing. Others became impressive screen-dominating stars who have gone on to maintain successful careers either in front of the camera or behind it. Jodie Foster was hardly a new actress in 1976, but she proved to be a breakout phenomenon with impressive turns in 'Echoes of a Summer,' 'Bugsy Malone,' the classic 'Freaky Friday,' as well as one of the greatest films ever made, 'Taxi Driver.' However, 1976 also saw the then thirteen-year-old girl take top billing in the tension-filled underrated thriller, 'The Little Girl Who Lives Down The Lane.' While there are fine supporting performances from Martin Sheen and Alexis Smith, it's Foster who performs what is essentially a tour-de-force one-woman show and steals the entire movie.

Just who is Rynn Jacobs (Jodie Foster)? She's young, couldn't possibly be any older than thirteen, maybe fifteen at the oldest, and yet no one in a sleepy upper-crust seaside town seems to know anything about the young girl. The grocers make regular deliveries. She apparently shares a joint bank account with her father. Rumor has it her father is a reclusive poet from England, but no one seems to have seen the man since he first leased the secluded house owned by Mrs. Hallet (Alexis Smith). Why doesn't she go to school? Where's her mother? Does she even have a mother? All of these questions swirl about the little blonde girl as she goes to and fro aloof to the quizzical eyes of the entire town.

On Halloween night, Rynn is home celebrating her birthday, apparently alone, when Mrs. Hallet's deviant son Frank who has a particular eye for young girls comes calling. He wants to see Rynn's father about something to do with the house, but unfortunately, he's working. Even with her father supposedly home, that doesn't keep Frank from making advances far too nefarious to be simply playful. When Mrs. Hallet shows up under the pretense of finding some canning jars, Rynn susses out a darker Hallet family secret that is all but confirmed when police officer Miglioriti (Mort Shuman) starts to become interested in Rynn and her father. As tensions rise between Rynn and the Hallet family, a deadly secret comes to light that could put Rynn's peaceful life in jeopardy. 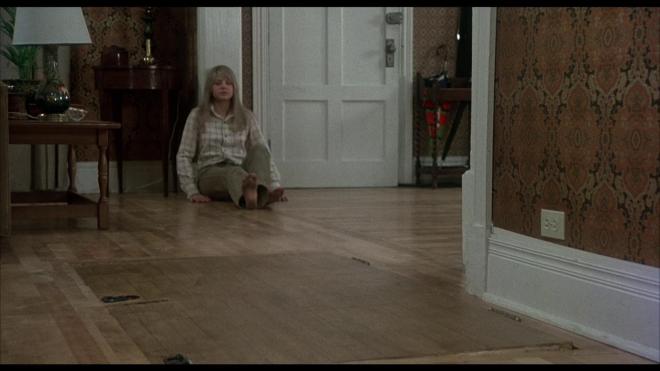 Prior to seeing this film, I'd only ever heard of 'The Little Girl Who Lives Down The Lane' within the context of 1976 being Jodie Foster's breakout year. I knew nothing of the film, what it was about, who else starred in the film, and simply made the poor choice of judging the film by the title. I figured it would be some sort of trite little drama or teenage coming of age story. I didn't expect 'The Little Girl Who Lives Down The Lane' to be such a tense and exciting potboiler of a thriller with a young Jodie Foster proving that she was a rare natural talent at thirteen years old!

Directed by Nicholas Gessner from a screenplay by Laird King based on his novel, one would naturally expect this film to have originally been a stage play. It pretty much exclusively keeps to one location, the house Rynn and her father have rented, and even within the house, Rynn rarely leaves the living room. So much drama, so much tension, and suspense is built within that one little space. It really is an impressive showcase of writing, directing and acting that the film feels bigger than the small canvas it's put on. Jodie Foster does an incredibly impressive job keeping the film focused and interesting as we see her masterfully invent one lie after another and still somehow keep track of everything. When she ropes in the lonely Mario played by Scott Jacoby into her schemes, you're not entirely sure if she has any genuine affection for the teen boy or if she's just using him to her own devices and Foster pulls of the duality masterfully.

Writing about a movie like 'The Little Girl Who Lives Down The Lane' is a precarious position to be in. I desperately want to water cooler this film to death and talk about all of the intricate plot twists and turns, but I know that I can't! If there are any other people out there like me who simply overlooked this film, I would be doing them a great disservice to spill any of the beans here in this review. If you've heard of the film and had never considered sitting down for a viewing, you owe it to yourself to check it out. The only thing I can do to convince you that it's worth the 90 minutes is to restate that Jodie Foster is amazing in it and that Martin Sheen delivers one of the slimiest, creepiest performances of his entire career. This was a movie that as soon as it finished I immediately started it over because I wanted to be sure I didn't miss a single little plot twist.

'The Little Girl Who Lives Down The Lane' arrives on Blu-ray thanks to Kino Lorber. Pressed onto a Region A BD50 disc, the disc opens directly to a static image main menu with music from the film playing in the background. The disc is housed in a standard Blu-ray case featuring reversible artwork that reflects the different posters created for the film's marketing.

'The Little Girl Who Lives Down The Lane' makes its Blu-ray debut with an impressive 1.85:1 1080p transfer. Aside from some heavy speckling during the opening credits, the print sourced for this transfer is in fine shape with minimal speckling or damage to be seen. Film grain has been retained allowing you to soak in the intricate production design work that went into creating Rynn's living space. It's practically a character of the film, each item has a specific purpose, it feels real but also like someone is trying to too hard to show a sense of normalcy. Colors are well saturated allowing flesh tones to come through naturally. The overall look of the film is a cooler grey/blue so the film has a sense of cold dampness to it so primaries have only a few pop out moments. No DNR or compression artifacts are apparent making this a very pleasing back catalogue release.

With a DTS-HD MA 2.0 mix, 'The Girl Who Lives Down The Lane' arrives with a very pleasing audio presence. This is an entirely dialogue driven film and the track keeps the actors' voices front and center and well balanced. Sound effects, atmospherics and the film's minimal score by Christian Baubert round out the rest of the mix well enough, but they're not the primary focus. Those elements are used sparingly to heighten mood and tension. Often throughout the film, there is no other sound other than the actors speaking and the effect really amps up the tension factor as conversations switch from coy playful banter to full-out confrontations. The audio source for this mix is in great shape and is free of any hiss, pop, or dropouts. All around a virtually flawless audio track.

Audio Commentary: Director Nicolas Gessner does a fine job with this commentary track. He has a lot of interesting things to say about the process of maintaining tension and directing the actors, especially a young Jodie Foster.

Martin Sheen Interview: (HD 27:27) This is a fantastic interview with the great actor who has a lot of great material to offer about the film's production, casting, working with Foster, as well as how he found his character.

A Conversation with Martin Sheen and Nicolas Gessner: (HD 5:33) I never thought a Skype interview would be interesting, but this one certainly has its moments. It's kinda nice to see old friends reconnect and talk about the good old days. Of note, you really only can see Sheen's screen as Gessner's side appears to be too dim, but the conversation is still worth listening to.

'The Little Girl Who Lives Down The Lane' is a hell of a tight, tense little thriller. While it may be one of her more overlooked films, this is truly the breakout performance for Jodie Foster as a star. She owns the film in every way and is a showcase of raw talent. It's actually odd to refer to her in the past tense in this way after so many fantastic performances over the past 40 years of her career. Kino Lorber brings this fantastic little flick to Blu-ray in amazing order featuring a stellar A/V presentation along with some worthwhile extras. If you've never seen or heard of 'The Little Girl Who Lives Down The Lane' you owe it to yourself to check this one out. If you're already a fan of the film and have been eagerly awaiting a Blu-ray release, I'm pleased to report this disc is highly recommended.

Sale Price 15.29
List Price 29.95
Buy Now
3rd Party 14.99
In Stock.
See what people are saying about this story or others
See Comments in Forum
Previous Next
Pre-Orders
Tomorrow's latest releases