The year is 2019. A mysterious plague has swept over the earth, transforming the majority of the world's population into vampires. Humans are now an endangered, second-class species—forced into hiding as they are hunted and farmed for vampire consumption to the brink of extinction.

It's all up to Edward Dalton (Ethan Hawke), a vampire researcher who refuses to feed on human blood, to perfect a blood substitute that might sustain vampires and spare the few remaining humans. But time and hope are running out—until Ed meets Audrey (Claudia Karvan), a human survivor who leads him to a startling medical breakthrough. Armed with knowledge that both humans and vampires will kill for, Ed must battle his own kind in a deadly struggle that will decide the fate of the human race.

"The World is a Vampire." - Smashing Pumpkins

You can sure say that again, Billy Corgan. And no, I'm not referring to the raging tween phenomenon that has taken the globe by storm, tainting the reputations of vampires everywhere by dragging them through glitter-laced mud. I'm talking about the first mainstream film from budding Australian writer/director brothers Peter and Michael Spierig. 'Daybreakers' not only gives the creatures of the night back their long overdue bite, the movie establishes a unique setting where vampires are the dominant civilization on Earth -- and humans have been figuratively placed on the endangered species list.

The story is set in the year 2019, a decade after the onset of a mysterious plague that has turned over 95 percent of the world's population into ravenous vampires. With so little humans left on the planet, a private pharmaceutical corporation run by Charles Bromley (Sam Neill) is the main blood supplier to the public, rounding up any humans they can capture to harvest their plasma in laboratory farms. Unfortunately, with demand so high and the supply running out, the lower classes who can't afford their share of sustenance have begun devolving into feral monstrosities called "subsiders" causing a menace in the streets. Forget the Ghostbusters, it's time to call undead Billy the Exterminator!

Anyway, it's no surprise fang central is desperate to avoid this terrible fate, so Bromley's company is also hard at work trying to concoct a synthetic blood substitute as a backup plan. Edward Dalton (Ethan Hawke) is one of the hematologists assigned this task, and he hopes this will be the answer to everyone's problems, particularly the humans, as he's a monster with a conscience. But one night when a good samaritan act by Edward saves a human named Audrey Bennett (Claudia Karvan) from being caught by the authorities and gains her trust, she takes him to meet the enigmatic Elvis (Willem Dafoe) who may hold the key to something even better than faux-blood -- a cure.

'Daybreakers' certainly has a very intriguing premise, and I'm actually a little surprised it took this long for someone to come up with the idea. I mean, everyone knows vampires suck their victims dry or turn the really unlucky souls into walking undead. Either way, it's one less living being (and possibly +1 to the gen-pop of Team Edward), so it makes sense that eventually only vampires would remain. Obviously this world would be much different than ours, and the Spierig brothers have some fun putting it all together by exploiting many of the typical vampire clichés while still adding some of their own ideas to keep it fresh. They really don't skimp on the details and the effects provided by WETA look fantastic as always. I even noticed new things on my second viewing. All of this is wrapped up in a sci-fi noir-esque shell along the lines of 'Dark City' and 'The Matrix'--making for one visually slick picture.

As 'Daybreakers' has that graphic novel-turned-movie type of experience, the performances aren't very deep, but they still serve well enough to get by. Hawke looks uncomfortable taking a fantasy turn, and fortunately it suits the uneasiness of his character as he sympathizes with the humans and struggles to keep his true feelings under wraps. Willem Dafoe's Elvis is just some guy with great one-liners that was in the right place at the right time, and unwittingly ends up becoming the most valuable ticket towards wiping out the worldwide vampirism. And Sam Neill appears to be having a devil of a time hamming it up and slinking around in the shadows. You just know he's up to no good the moment you lay eyes on him.

Even though 'Daybreakers' works hard at becoming a genre classic, to be honest it doesn't quite get there. The movie's main shortcoming is its execution, with the finished product feeling rough around the edges. There are some sloppy edits, and although I liked the gory nature of the attacks, attimes I felt they were thrown in more for filler than for anything else. Certain twists also spill too many beans during the setup, so the cat is let out of the bag before we get to the eventual reveal. At least it was for me.

That said, considering how the Spierigs' resume goes from a short film to zombie B-movie to 'Daybreakers'--it's still an impressive progression despite its flaws, and pumps life through the veins of a genre that's been as hollow as an empty coffin lately.

'Daybreakers' rises on a dual-layered BD-50 Blu-ray Disc housed inside a standard blue keepcase. My screener copy also came with a shiny foil-embossed slipcover. There are forced trailers for 'From Paris With Love,' 'Gamer,' the uber-cheesy 'Lionsgate Blu-ray' promo, and 'EPIX HD.' The disc is also reported to be region-locked and therefore will only function properly in Region A compatible machines.

Lionsgate has treated the Blu-ray of 'Daybreakers' with a 1080p/AVC MPEG-4-encoded transfer framed in 2.40:1 aspect ratio. For the most part, the visuals should make most viewers happy, but there are a few issues keeping the transfer from receiving a higher score.

The image has a thin sheen of grain and it generally remains balanced throughout the movie. The vampire world is often awash in a colder, clinical color palette consisting mainly of blue, gray, and white hues for that noir-ish look. There are splashes of blood red crimsons and the yellow vampire eyes gleam with an eye-catching brilliance. Naturally, things become much less bleak in daylight scenes, having warmer tones mixed in with a bit of lush vibrant greenery. Black levels are pitch-perfect across the board, which is always crucial in any film filled with long stretches of darkness, while contrast is also very stable.

Fine details and textures are good but are never fully revealing, and some places do appear softer than others. A slight blurring/bleeding occurs in the backgrounds of busier chase scenes, although the CGI is probably the culprit to blame here. Aside from occasional fluctuations in digital noise that seems to peak in the winery, the rest of the transfer is pretty well spotless. Ultimately, even though 'Daybreakers' has room for improvement, what we get is still a solid presentation.

The track is surprisingly dynamic, with surround usage delivering a highly active presence. Screeching bats, hissing stun darts, and numerous other sound effects and general ambience pleasantly envelopes the listening area from all directions. Christopher Gordon's score also smoothly drifts to the rear channels and provides a nice even spread throughout the room. The LFE rumbles frequently, from the roaring engine of Elvis' Trans Am to scorching vampires in the sunlight. The well placed jump-moments are laced with sudden, startling booms, too. Though whispers can be a hair on the soft side, the rest of the conversational dialogue is cleanly delivered and appropriately balanced with the mix. If the track isn't quite demo-worthy material, 'Daybreakers' still offers one of the more impressive lossless soundtracks on the format.

Blu-ray owners get all of the supplements found on the standard-definition DVD as well as a slew of high-definition exclusives. Shared features include: 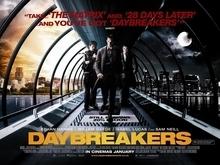 The Spierig brothers' 'Daybreakers' brings an interesting dystopian twist to vampire lore and this film has enough style and gore to appease most horror fans, even if it isn't a perfect entry in the genre. Add a great video transfer, a fantastic audio presentation, and a smattering of standard supplements followed by another helping of HD exclusives (including the extremely thorough making-of documentary), the non-sparkly 'Daybreakers' is worth checking out--at least as a rental.