On Halloween night, a group of the United States' most notorious serial killers escape from Statesville Asylum and descend upon a giant funhouse whose theme is based on their different reigns of terror. The unsuspecting carnival patrons think that the carnage created at the park is just part of the show… until they become part of the main attraction. The only people left to stop the killers are a rag-tag group of college kids, a clueless deputy (Ben Begley, The Hungover Games) and the local sheriff (Scottie Thompson, Skyline, Before I Wake), who seems to have a strange attachment to the leader of the maniacs, the silver-tongued devil "Mental Manny" (Jere Burns – Justified, Angie Tribeca).

After watching 'The Funhouse Massacre' and seeing that Rob Zombie's '31' is set for a limited theatrical release in the next couple months, I'm starting to wonder if the premise of murderous psychotics taking over a carnival amusement park has been floating around for a while. The two movies are obviously coming from similar concepts as a small group of friends try to survive the night while demented lunatics chase after them. Perhaps, it's not all surprising since ideas travel through cyberspace faster and with greater ease than it is to release five criminally insane convicts from a supposedly maximum security institution. (There, I'm referring to 'Funhouse Massacre,' not Zombie's new movie, though I wouldn't be surprised if that movie comes with the same details.) The major difference between the productions, other than Zombie pitting the friends against three-times the number of killers, is that this production found backing from a studio while Zombie's flick was crowdfunded by the musician's rabid fans. Oh, and there's also the fact that this movie has fun with the concept whereas Zombie's will likely not be fun at all.

But that's enough on Rob Zombie! The attention should be on this gruesomely gory horror flick where relative newcomers surprise genre fans by turning what should amount to really nothing more than "splatter-porn" into an oddly fun and weirdly quirky low-budget piece. And the movie doesn't actually start with any indication of secretly hiding its comedic side, of holding a bag of goofy jokes and wacky gags behind its back — along with an array of blood squibs, razor-sharp knives, a large wooden mallet and several dummy heads. It opens in all seriousness with Robert Englund as the warden of a mental institution housing some of the country's most repugnant serial killers and having to answer the questions of a news reporter (Candice De Visser) as the building prepares to be permanently shutdown. In actuality, the whole thing is a cheap and easy way to introduce the deranged maniacs nicknamed after their particular methods of torturing and killing victims. There are a couple hints of silliness underscoring the introductions, but it's really just a corny, fumbling set up rushing to give horror hounds the headlining act. 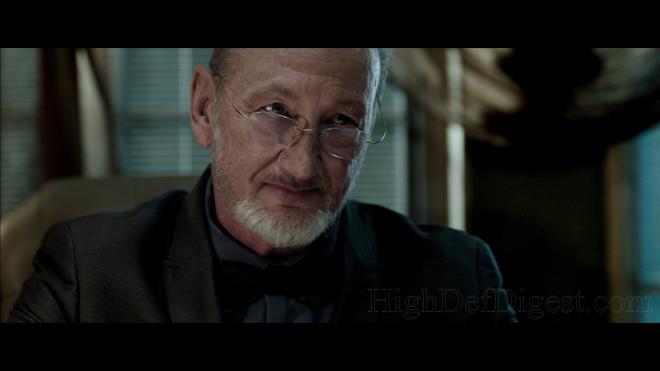 The opening also provides the necessary exposition explaining how Jere Burns ('Burn Notice') ends up leading a twisted taxidermist (Clint Howard), a cannibal chef (E.E. Bell), a loony dentist (Sebastian Siegel) and a fiercely savage wrestler (Mars Crain) to inflict their reign of terror in a Halloween-themed funhouse. This is contrasted with a group of friends who work together at a local diner, but whose personalities are not unique enough to earn each of them with a clever moniker relating to their particular talents. They follow the standard horror tropes, making them the usual fodder who seal their fates the moment they open their mouths and audiences eventually cheer to see brutally massacred. Well, except for a pair of modestly bashful virgins in Renee Dorian, whose original story Ben Begley based his screenplay on, and Matt Angel serving as our hopeful "Final Girl" survivors and joined by Erick Chavarria dressed as a wannabe Machete hero. The plot tightly follows the familiar "slasher' blueprint and ends exactly as would be expected, failing to really offer any new surprises in a production where much of its budget evidently went to the shockingly effective special effects.

However, 'The Funhouse Massacre' nonetheless manages to entertain those willing to give this direct-to-video horror feature a chance, primarily for its offbeat sense of humor that includes the over-the-top buckets of gore. The jokes start when Deputy Doyle (Begley) enters the scene while attempting to solve the murder of a news reporter found in her hotel room but is corrected by the more experienced Sheriff Kate (Scottie Thompson). Begley plays the bumbling, inept clown to the determined, by-the-numbers detective work of his superior, and much of the silliness derives from his gung-ho, ready for action clumsiness. Sadly, the character also reminds of director Andy Palmer's crude and artless ability behind the camera. Though he's competent enough for a production of this low-budget caliber, Palmer fails to make his movie stand out in any memorable way. He has good comedic timing and the gags come with the requisite off-kilter beat to allows viewers a moment to laugh, but he doesn't give it any sense of urgency or even a tinge of suspense. The movie will likely fade into obscurity, but for voracious horror hounds craving for blood and gore, 'The Funhouse Massacre' makes for an amusing chew toy.

Shout! Factory brings 'The Funhouse Massacre' to Blu-ray under the distributor's Scream Factory line. The Region A locked, BD50 disc is housed inside the normal blue case with reversible cover art. At startup, the disc goes to a static menu with music and the usual options along the bottom.

Shot digitally, the low-budget horror feature debuts on Blu-ray with a good and mostly satisfying 1080p/AVC MPEG-4 encode. But the presentation also arrives with that very generic, dull and sterile quality that seems to be typical when filming on HD cameras. The overall cinematography lacks style and texture, despite the fact that the palette displays glowing, vibrant primaries and brightly animated secondary hues to better match the movie's funhouse theme. Contrast and brightness are accurate and well-balanced with rich, penetrating blacks that provide the 2.35:1 image with some depth, but highlights tend to bloom a tad, ruining some of the finer details in a few areas. As would be expected for a digital source, the freshly-minted transfer shows razor sharp definition and distinct fine lines in the clothing and funhouse architecture while facial complexions are revealing with healthy flesh tones. The video also comes with some very minor instances of banding and moire effects.

The straight-to-video cheese-fest fares much better in the audio department with an excellent DTS-HD Master Audio soundtrack, but as per Scream tradition, viewers can enjoy the movie in either stereo or 5.1 surround sound. And the latter turns out to be the better option, as various noises travel to the side speakers with convincing effectiveness. Though there are a couple times when certain sounds feel a bit forced and thin, the ambient effects are nonetheless nicely employed to create an amusing and decently immersive soundfield. The music and song selections, honestly, make better use of the entire system, spreading evenly across the soundstage and pleasantly bleeding all around. Imaging is broad and highly engaging, exhibiting a crisp and detailed dynamic range that remains clean even during the loudest action sequences. Vocals are precise and well-prioritized in the center, and low bass provides the lossless mix with a hearty, palpable presence.

'The Funhouse Massacre' is a surprisingly amusing low-budget horror comedy with the right amount of gruesome gore and silly gags to please the palates of even the most discerning of horror hounds. Granted, the script doesn't stray from the familiar "slasher" blueprint and doesn't offer any new surprises, but it gets the job done for voracious genre fanatics on a Sunday afternoon. The Blu-ray arrives with a good but boringly sterile picture quality while the audio presentation is enough to have viewers immersed in the blooddrenched carnival mayhem. Joined by a decent but pretty dull set of bonus features, the overall package is worth a rent when horror hounds are looking to waste away a couple hours in the day.

Sale Price 14.99
List Price 19.97
Buy Now
3rd Party 9.47
In Stock.
See what people are saying about this story or others
See Comments in Forum
Previous Next
Pre-Orders
Tomorrow's latest releases