After a bank job goes badly wrong, three desperate criminals take a young woman and a father and child hostage - it's the beginning of a frantic and violent road trip that not all of them will survive.

'Rabid Dogs (2015)' is evidence that French filmmakers are not above dipping their hands into the remake inkwell. For cinephiles, that shouldn't come as a startling revelation and probably isn't some eye-opening bombshell given the seemingly never-ending trend currently plaguing most of the industry. But, in a weird way, there is something comforting in the notion that U.S. moviegoers are not the only ones suffering the craze and that these filmmakers are ultimately no better at reinterpreting and modernizing classic favorites. (Of course, the Indian film market is littered with such movies, but given their uniqueness, that's a discussion for another time.) This crime thriller is a revamping of the 1974 Italian film by the Italian horror maestro Mario Bava, a notoriously troubled production that was never completed until two decades after the director's passing. Although known for being outside of the norm for the legendary filmmaker, the splendidly suspenseful and well-made police-procedural drama, a subgenre of exploitation Italian crime thrillers called poliziotteschi films, the movie is a riveting watch about dangerously desperate criminals.

Unfortunately, for those expecting something remotely close to good as the original, this film from relative newcomer producer Éric Hannezo in his directorial debut fails at building apprehension and uncertainty of the outcome. In a plot featuring three urgently impatient bank robbers on the run, a female hostage on her honeymoon and a very grave father driving his ill child to the hospital, it's fair to presume a great deal of suspense from the situation, especially with a statewide manhunt on their heels. Yes, there's plenty of friction between the agitated leader of the thieves Sabri (Guillaume Gouix) and his pair of cronies, a dolefully pensive Manu (Franck Gastambide) and a psychotic ticking time bomb Vincent (François Arnaud). And yes, the father (a terrific Lambert Wilson) strains to do as instructed to protected his daughter, who we're told is very sick and kept sedated at all times, while the woman (Virginie Ledoyen) is hopelessly uneasy by violence and Vincent's creepy advances. But despite the great setup, the film never has the audience on tenterhooks or watching with bated breath of how it will all end. 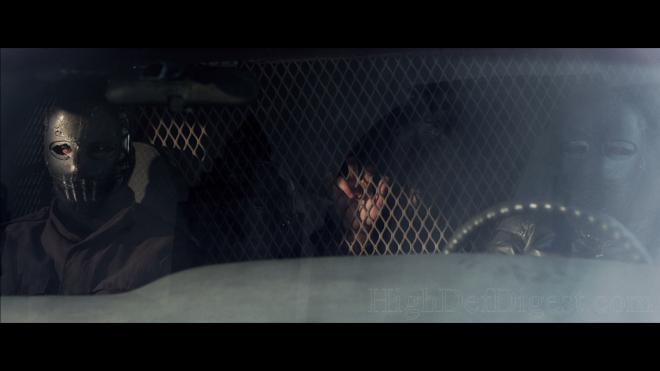 The problem could very well be Hannezo's inexperience with the genre and perhaps to a larger extent an unfamiliarity with constructing suspense when five characters are trapped in the same car. The cast does fine with the dialogue, creating a sense that the once fool-proof plan is slowly ripping at the seams, but the director, who comes from a background in comedy and documentaries, doesn't take advantage of the chemistry between the actors. We see that Manu is starting to feel remorse for his part, that Vincent is gradually starting to crack and that Sabri is unsure of himself as the leader. But never once do we actually feel that tension because Hannezo is continuously moving the camera in and out the car when emotions begin to flare up and oddly switches to a static steadyshot inside the car when things are calmer, and Arthur Tarnowski's editing follows suit. The closest audiences come to an edge-of-your-seat moment is when they have to make a pit stop at a rundown gas station where the attendant (Pierre Lebeau) recognizes one of the thieves. But the rest of the car ride is a drowsy road trip that'll have some napping.

And yet, what 'Rabid Dogs' lacks in entertaining tension it makes up in style, mostly thanks to the eye-catching photography of Kamal Derkaoui. The digital cinematography is often distractingly apparent, much too sterile and somewhat artificial, but at his best, Derkaoui uses the look to give the plot a weirdly fantastical atmosphere. Shot in the rural areas of Québec, Canada, the characters live in a world similar to our own, but it's an off-kilter existence that feels as though infinitely collapsing into a state of chaotic confusion. That feeling is best manifested in the third act when the thieves find themselves trapped during an eerily bizarre, nightmarish festival. Although it adds some level of engagement to an otherwise dull production, it's frankly a tacked on sequence not seen in the original but the director's hope of raising the suspense and a sense of danger. It simply looks cooler than it really is and had Hannezo done more just like, the French-Canadian collaboration would have made a better crime thriller. Making the joy ride worth it is Wilson's performance as a father hiding a secret, adding a final, dark twist to the closing moments.

Shout! Factory brings 'Rabid Dogs (2015)' to Blu-ray as a two-disc combo pack under the distributor's Scream Factory line and in collaboration with IFC Midnight. The Region A locked, BD50 disc sits opposite a DVD-9 copy inside a blue, eco-elite case. At startup, the disc goes straight to a menu screen with full-motion clips and options along the bottom.

The French-Canadian remake takes Blu-ray hostage with an exceptional, near-reference 1080p/AVC MPEG-4 encode that's squeaky-clean and for the most part, without any really detrimental blemishes. Only, because the movie appears to have been shot digitally, the presentation lacks the sort of texture and character that would make it unique.

Granted, the photography of Kamal Derkaoui is well represented here and makes for a great viewing experience, displaying crisp, comfortably-bright contrast levels although it's a tad restrained for the style. Speaking of which, the film was shot with a slight shallow focus, giving much of the picture a nice three-dimensional feel. Blacks are deep and rich throughout, showing outstanding detailing in the darkest portions of the frame. The 2.35:1 image is also saturated in a lavish array of vivid primaries with blues being the most extravagant and standout while secondary hues animate the screen with life and energy. And yet, the high-def transfer comes with that sterile, digital look that's frankly off-putting.

On the plus side, the video shows plenty of razor sharp detailing in every scene with distinct fine lines in the threading and stitching of the clothing. Every little nick and scratch on the masks of the burglars are plainly visible, and viewers can make every detail inside the car, the surrounding foliage and in the criminals' ramshackle hideout. Facial complexions appear natural and incredibly revealing, exposing the tiniest wrinkle, crease and negligible flaw in the entire cast. It's a fantastic looking high-def presentation.

While it may not compare to other action-packed movies with lots of hurly-burly excitement, the thieves make a run for it with an excellent DTS-HD Master Audio soundtrack that delivers the goods.

Much of the movie is a front-heavy design, keeping audience attention on the onscreen drama and the tension between the characters unfolding. So with that in mind, the dialogue and conversations are prioritized above all else, delivering every line with distinct clarity and outstanding intonation. Imaging is broad and welcoming, displaying a spacious soundstage with clean, well-balanced channel separation and a strong, detailed mid-range. Several off-screen effects convincingly enhance the soundfield with the subtle noises of local wildlife while Laurent Eyquem's score across all three channels keep viewers engaged.

However, the track isn't particularly dynamic or extensive, even during the loudest action segments, and although there's plenty of appreciable low-frequency effects, much of it remains in the mid-bass area and doesn't really extend much deeper. Occasionally, atmospherics spread into the side speakers, but they are too far and few in between to generate a truly immersive environment. Nevertheless, the lossless mix has much to offer and enjoy, complementing the film very well.

'Rabid Dogs (2015)' is evidence that French filmmakers are not above dipping their hands into the remake inkwell, which shouldn't come as much of a surprise. Unfortunately, for those expecting anything remotely close to good as Mario Bava's original, relative newcomer producer Éric Hannezo in his directorial debut fails at generating suspense and takes his audience on a yawn-inducing and joyless ride. The Blu-ray arrives with a superb, near-reference picture quality and a great audio presentation, which more than makes up for the boring story. With a decent but equally dull set of supplements, the overall package might be of interest for Bava fans curious of the results, but for everyone else, this is a rental at best.

Sale Price 10.95
Buy Now
3rd Party 6.49
In Stock.
See what people are saying about this story or others
See Comments in Forum
Previous Next
Pre-Orders
Tomorrow's latest releases