Working for O.S.I., the Office of Scientific Investigation, A-Man agent Jeffrey Stewart and his partner Dan Forbes are sent to a local hardware store where they find a strong magnetic field has magnetized every metal item in the store. Investigating further, they eventually trace the source of the magnetism to an airborn flight carrying scientist Howard Denker, now dying of radiation poisoning, who has carted on board with him a new radioactive element which he has bombarded with alpha particles for 200 hours. The element, dubbed 'serranium' grows geometrically by creating matter out of energy which it absorbs from metallic objects surrounding it. Stewart calculates that if the substance is not destroyed soon that within 24 hours or so it will have grown large enough to throw Earth out of its orbit.

Perhaps one of the biggest tasks facing any filmmaker is to help their audience suspend their disbelief. If the audience isn't buying what you're selling, they'll walk out, or worse - they'll stick around to laugh at your film. Several factors play into creating the perfect conditions to help suspend disbelief. For starters, a compelling story helps hook the audience so they're not paying attention to every single minute detail. It also helps to have a very committed cast who in spite of ridiculous conditions or character beats, they give their performance every effort. Curt Siodmak's 1953 science fiction thriller 'The Magnetic Monster' is a film that requires a lot of suspension of disbelief, but if you can turn your brain off, the flick can be a ton of fun.

When local police or federal investigators are faced with a problem beyond the realm of conventional investigative methods, they turn to the O.S.I., the Office of Scientific Investigation. These agents are commonly referred to as "A-Men" for their dealings with atomic science. When all of the metallic objects at a small hardware store suddenly and inexplicably become magnetized, A-Men Dr. Jeffrey Stewart (Richard Carlson) and his partner Dr. Dan Forbes (King Donovan) are called in to investigate. They quickly detect a bizarre form of radiation emanating from the roof of the shop. From there, they were able to understand the origin of the mysterious element - an overhead flight carrying esteemed scientist Dr. Howard Denker (Leonard Mudie).

What Dr. Stewart and Dr. Forbes learn next rattles them to the core, Denker has been experimenting with atomic energy and has accidentally created a monster atom, one that doubles in size unless it is bombarded with alpha particles otherwise it will cause a massive energy implosion and destroy everything around it. Even after one such implosion, the unstable element continues to grow rapidly. Stewart has one last chance to slam the element mass with enough energy otherwise within 24 hours it will reach such a critical mass that it could destroy the entire planet! 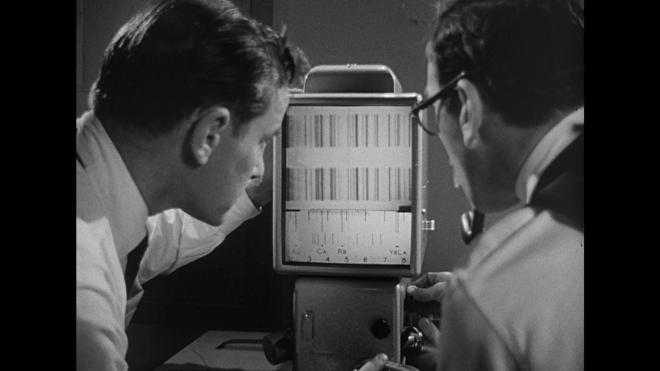 If you don't mind having to do a bit of pretending and using your imagination while watching a movie 'The Magnetic Monster' is a riot of B-movie science fiction filmmaking. Essentially, 'The Magnetic Monster' attempts to combine 'Frankenstein' with a nuclear bomb thriller. It's a creation of man that was designed for good but could end up destroying us all. The simple setup and premise of the film works well for itself and the commitment of genre regulars like Richard Carlson and King Donovan help anchor what could have been a completely silly film. The invisible monster doing things could have been silly had the cast let up even in the least bit.

The smart script and direction by Curt Siodmak with novelist Ivan Tors take a grounded approach to the pseudo-science on screen. While tough to swallow on face value, the right amount of time is spent on building the world the characters occupy that it helps the audience suspend that pesky tendency of disbelief. While this film certainly hasn't aged very well in the 60 years since its release, the film remains a swift 76 minutes of fun. I certainly don't see everyone loving this film as much as I did, but fans of classic 1950s era drive-in science fiction will have a gas with this one.

'The Magnetic Monster' arrives on Blu-ray courtesy of Kino Lorber and their Studio Classic line. Pressed onto a Region A BD25 disc, the disc is housed in a standard Blu-ray case and opens directly to a static image main menu with traditional navigation options.

With a newly minted 1.37:1 1080p transfer, 'The Magnetic Monster' makes for a pleasing upgrade to Blu-ray. With a fine layer of film grain intact, the image showcases a good amount of detail. Facial features, the costuming, and all of the wild and crazy scientific equipment comes through with great clarity. There is a bit of focal softness here and there, almost as if the focus puller wasn't exactly on the bounce whenever an actor moved about the screen. This is an issue baked into the film and not a transfer issue. The source print is in pretty good shape overall, some mild speckling and small scratches appear here and there. The image's worst issues appear around the optical transition sequences. The film's black and white greyscale is solid and balanced, blacks are inky and shadows provide a sense of depth to the image. For a film of this vintage, this is a pretty impressive looking Blu-ray release.

'The Magnetic Monster' gets a nice uptick in the audio department thanks to a solid DTS-HD MA 2.0 mix. This is a very narration and dialogue heavy film and thankfully every spoken word maintains a strong and stable presence. Some of the sound effects, especially the electronic hums and during the climax can provide a tad bit of distortion, but nothing too serious. Even with some background and atmospheric effects work, the track does feel rather flat in places. The audio source is in decent shape, there is some slight hiss and a few pops, but again, nothing so distracting as to pull you out of the experience of watching the film. Even with a couple of notable faults, this is still a very strong audio mix.

Audio Commentary: Film Historian Derek Botello provides a very interesting and at times entertaining commentary for this film. Given that his approach is very anecdotal, he manages to cover a lot of details about the flick.

If you're a fan of classic drive-in 1950s sci-fi movies, you should have a great time with 'The Magnetic Monster.' Of course given the age of the film and its invisible villain, the film can be tough to take seriously at times, but the commitment of the cast and the great pacing and direction keep this thriller moving forward at a great clip and is never dull. Kino Lorber brings the film to Blu-ray in fine order with a very impressive image and a very strong audio track. Extras are made up of a decent audio commentary with a collection of trailers. Recommended.

Sale Price 49
Buy Now
3rd Party 49
In Stock.
See what people are saying about this story or others
See Comments in Forum
Previous Next
Pre-Orders
Tomorrow's latest releases