A serial killer is brutally murdering priests and nuns, leaving a black rosary carefully draped in each victim s lifeless hand as his calling card. Father Robert Koesler s (Donald Sutherland, The Great Train Robbery) routine life as a parish priest is suddenly shattered when the killer admits to the heinous crimes during confession. Detective Koznicki (Josef Sommer, Witness) desperately needs the priest s help, but Koesler is tied to his sacred vows and hampered by the blustery, hardline Father Ted Nabors (Charles Durning, True Confessions). Now, Father Koesler and Lieutenant Koznicki must frantically work against time to save the next victim, catch the killer and stop The Rosary Murders. Also starring Belinda Bauer (Robocop 2) with a screenplay by the great, Elmore Leonard (52 Pick-up) and the film s director Fred Walton (When a Stranger Calls, April Fool s Day). Special Features: Trailers

It's a tough day when you sit down to watch a movie you've never seen but were excited to get behind because of the names involved and the film just turns out to be a dud. When you've got a solid cast with a decent director and a screenplay co-written by one of your favorite authors, it's a tad depressing when the film fails to light up any sparks. Alas, that is the case with 1987's 'The Rosary Murders' starring the always reliable Donald Sutherland and the late Charles Durning, Directed and co-written by Fred Walton and written by the late great Elmore Leonard. It's a movie that strains to generate suspense and fills each scene with characters who rarely come to life.

Life at the Holy Redeemer Church in Detroit, Michigan is a pretty routine affair. The fathers and sisters do what they can to care for their flock through the tumultuous day-to-day affairs of life and even in death. For Father Robert Koesler (Donald Sutherland), his life keeps to this routine. In all of his years of working with the church and helping his parishioners, nothing too out of the ordinary or earth-shattering ever happened - that is until a priest was murdered as he recovered in a hospital. As startling as this was, it is the murder of his friend Sister Ann Vania (Kathleen Tolan) in her dormitory room that shakes Father Koesler's very soul. Ann was a dear friend who had just confided in him that she was leaving the Sisterhood for the love of a man and had asked Father Koesler to give her away at the wedding. When another priest is murdered, a pattern in the killings emerges, each victim has a set of rosaries that doesn't belong to them in their hands.

As the Detroit police are convinced that they have a serial killer on their hands, the lead officer in charge of the investigation Lieutenant Koznicki (Josef Sommer) brings Father Koesler into the investigation. As the pair try to figure out the intricacies of the case, Detroit Free Press reporter Pat Lennon (Belinda Bauer) is pulling together her own details of the case working to find the missing pieces of a lethal jigsaw puzzle. When the killer comes forward to Father Koesler during a private confession. With his loyalty to the church called into question by his superior Father Nabors (Charles Durning), Father Koesler must do what is right not only by god but by the laws of man to ensure that no one else is murdered. 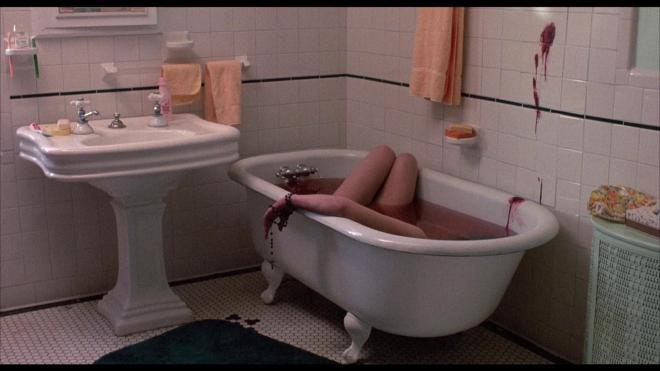 'The Rosary Murders' has all of the right elements in place for a perfect who done it murder mystery thriller that would make Agatha Christie proud. So, where does it all go so wrong? The cast lead by Donald Sutherland, Charles Durning, Josef Sommer, and Belinda Bauer are well-cast and play their parts with an inquisitive vigor necessary for the story. The screenplay by Elmore Leonard and Fred Walton is sharp filled with strong character beats and some snappy dialogue. But somewhere in the recipe for great filmmaking these ingredients just failed to congeal into something edible.

Part of what brings this movie down is the pacing, it can be dog slow in some places. Conversations, while well written, feel like there are too many beats between responses to feel genuine, almost as if the actors are quickly reading their lines off screen. Granted not every scene is like this, but enough of them are that the flow of the film starts to feel off. Another thing that fouls up the film is that it starts out so fast with the death of a priest and then the murder of a nun, the rest of the film feels like we're watching a protracted third act. There isn't a natural build to the excitement in a way that leads to a satisfying and interesting payoff. While it's interesting material to see a priest with a crisis of faith and confidence, it doesn't make for an exciting murder mystery when one of the principal investigators knows who the murderer is long before the rest of the audience does. 'The Rosary Murders' boils down to a movie with a lot of potential that just underwhelms in the final stretch. It's an okay movie, but not the thriller I was hoping for.

'The Rosary Murders' arrives on Blu-ray thanks to Kino Lorber and their Studio Classics line. Pressed onto a Region A locked BD25 disc, the disc is housed in a standard Blu-ray case and features reversible cover artwork. The disc opens directly to the main menu featuring standard navigation options.

Considering the age of the film and it's status as a back catalogue release, 'The Rosary Murders' actually makes for a pretty decent debut onto Blu-ray with this 1.85:1 1080p transfer. Shot on location in Detroit, this is a very cold and drab looking film - perfectly replicating your average Michigan winter. That said, this isn't a beautiful looking film. Fine film grain has been retained allowing for appreciable detail levels, but much of the scenery or costuming isn't all that interesting to look at. Colors are likewise muted to keep in line with the season as primaries don't really leap off the screen unless the scene in question takes place in a well-lit area. Black levels are solid giving the image a strong sense of depth in a number of scenes. Without any serious print damage, only some very mild speckling, 'The Rosary Murders' makes for an average HD debut.

With an English DTS-HD MA 2.0 audio track, 'The Rosary Murders' has an odd auditory presence. While dialogue remains front and center and can have a crisp and lively presence, the sound effects and the film's score by Bobby Kaurel and Don Sebesky feels weightless and dubbed in. The elements lack an appreciable sense of space to allow any given scene a sense of dimensionality. To that end, the audio works and is serviceable to the movie, but it lacks a dynamic punch to give it a real presence so when you hear a music cue or a stinger that is supposed to amp up your suspense levels, it just falls away. It's a decent track but don't expect to have your hair blown back.

While 'The Rosary Murders' wasn't everything I was hoping for considering the pedigree involved, it is a watchable experience. This is a movie that should have, by all accounts, lit up the screen as a clever murder mystery thriller, but instead takes a more contemplative approach that some may struggle to keep their interest in. Kino Lorber has brought 'The Rosary Murders' to Blu-ray in decent form with a serviceable A/V presentation; extra features are a collection of trailers. If you need something to watch 'The Rosary Murders' is a decent rental.

Sale Price 17.99
List Price 29.95
Buy Now
3rd Party 13.1
In Stock.
See what people are saying about this story or others
See Comments in Forum
Previous Next
Pre-Orders
Tomorrow's latest releases