When their bus is crippled on the side of a deserted road, a team of high school athletes discover an opponent they cannot defeat – and may not survive. Staring hungrily at them through the school bus windows, the "Creeper" returns again and again. But when the teammates discover that it's selective about whom it attacks, it will test their ability to stick together – as the insatiable menace tries to tear them apart! This chilling sequel to the hit film Jeepers Creepers stars Ray Wise (Twin Peaks, RoboCop), Eric Nenninger (Malcolm in the Middle), Nicki Aycox (Joy Ride 2) and Jonathan Breck returning as The Creeper.

Picking up only days after the events of the first movie, 'Jeepers Creepers II' easily ranks as one of those rare sequels that surpasses the original and offers a more satisfyingly fun time at the movies. But part of the sequel's success over its predecessor, which starred Justin Long and Gina Phillips, is audiences entering with the knowledge of seeing a creature feature. There isn't a sudden, awkwardly jarring red-herring shift in tone and genre. Such tactics may work for other, more talented filmmakers — Hitchcock, anyone! — but director Victor Salva, who also penned this follow-up, clumsily stumbled the gears and brakes the transmission in the first movie, bringing an otherwise suspenseful road movie to a screeching halt. Amazingly though, Salva salvages what's left of that wreck in this straightforward supernatural horror flick with bits of dark comedy relief sprinkled throughout. Without the need of a setting up the monster's entrance and pesky exposition, Salva can simply have silly fun with his creation.

Jonathan Breck, once more, dons the makeup as The Creeper, the winged demon in the weathered hat and oilskin duster who feeds on human flesh for 23 days every 23 years. The why is never explained, but then again, that's part of the creature's engaging mystery. That and his admittedly cool look. Because Long's Darry botched the creature's plans for hibernation, a fact announced over the radio in shocking detail, it's desperate to satisfy its ravenous hunger before the clock runs down. And what better way to do this than a school bus full of young, untainted teenagers. It's practically a buffet on wheels, which The Creeper takes drooling delight in, sniffing their terrified hormones through the window and singling out his favorites as if he were picking a lobster in fish tank. That creepily hilarious sequences eventually leads to panicked survival mode amongst the basketball team on their way home from a championship game. The chip-on-his-shoulders Scott (Eric Nenninger) suggests feeding the monster its selections with somewhat racial undertones while the rest make a run for it. 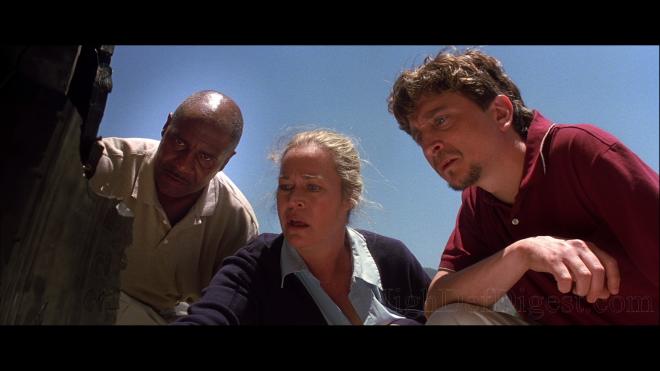 Rushing to ease the tension is the always enjoyable Ray Wise as single-minded farmer on the warpath Jack Taggart. The previous day, the hard-working farmer was witness to The Creeper's hunger lust when it literally flew away with Taggart's youngest son, like an owl snatching a mouse. The entire scene is one of several well-made and terrifically engaging moments where the demon creepily hides in plain sight as a scarecrow. Similar to his role as the distraught Leland Palmer on David Lynch's 'Twin Peaks,' Mr. Wise is an emotional wrecking ball who wins audiences over with his convincing performance, expressing a great of the pain with his eye alone and a believable tone of hurt in his voice. Joined by his older, surviving son (Luke Edwards), Wise's maddened pursuit of The Creeper on its last night of hunting takes him to the stranded school bus, leading to a final showdown that's wildly entertaining and a genuine highlight. Riding in like a cowboy with guns blazing, he's not there to pull some last minute heroics, showing little concern for the terrified teens in the ensuing battle. Rather, he's gripped with the burning passion of vengeance.

One the strongest aspects of the first movie was the two college siblings traveling home for spring break, and that same characterization continues in 'Jeepers Creepers II.' Demonstrating Salva's talent for creating likable kids and conversations that feel authentic, the teens here are distinct, three-dimensional personalities confronting a threat that ideally would bring them together, especially seeing they are team. However, a pre-existing layer of mistrust from the grumbling Scott mixed with fear turns into an equally dangerous concoction, creating some fascinating, albeit a tad histrionic, interactions. And in typical teen fashion, Scott's perceived injustices are more important than The Creeper trapping his friends inside the bus, which only adds to the tension and suspense. What's also fun about watching these kids is their willingness to fight back, defending themselves with a pole vault pole or by simply not letting fellow teammates be taken. While the kids display some genuine grit and pluck while impatiently awaiting the arrival of farmer Taggart, audiences can sit back and enjoy a straightforward creature feature that surpasses its predecessor, converting even this skeptical viewer into one of The Creeper's followers.

Shout! Factory brings 'Jeepers Creepers II' to Blu-ray as a two-disc Collector's Edition package under the distributor's Scream Factory line. The two Region A locked, BD50 discs are housed inside a normal blue case on opposing panels with brand new reversible cover art and a cardboard slipcover. The second disc contains a wealth of new bonus features that should make fans very happy.

The Creeper sniffs out its next meal with a great looking 1080p/AVC MPEG-4 encode (2.35:1) that shows a marked improvement over previous home video editions. Granted, a good deal of the picture quality is a tad on the soft side, but that's more to the original cinematography of Don E. FauntLeRoy than a fault in the encode.

The high-def transfer nonetheless shows sharp detailing in the practical and makeup effects of the winged demon while facial complexions reveal strong lifelike textures, exposing every pore and bead of sweat in the young cast. Even while the story is set mostly in the middle of the night, viewers can make out the furry fabric of the letterman jackets, individual blades of grass are distinct and every rivet along the inside and outside of the school bus are plainly visible. Contrast and brightness are very well-balanced, making the whites of flashlights shine brightly and the pitch-blackness of the shadows and a few articles of clothing are true and accurate. Primaries, especially reds and blues, continuously pop with animated energy while secondary hues are full-bodied and cleanly rendered, making for an eye-pleasing watch.

The vicious, flesh-eating demon terrorizes the football team with a fun and endlessly enjoyable DTS-HD Master Audio soundtrack, offered in two separate versions — the first is a surround soundtrack while the second is 2.0 stereo track — which has become customary of Scream Factory releases.

The front soundstage displays excellent separation and balance across all three channels, generating an engagingly spacious soundscape with great warmth and a sense of presence. From the flapping of The Creeper's large wings to birds chirping and leaves rustling in the distance, background activity is continuous and convincing. The entire presentation engages with distinct, clean clarity between the frequencies, which remain detailed even during the loudest segments. The score enjoys the breathing room most, nicely bleeding into the surrounds and into the front heights when the upmixer function of the receiver is applied. Directionality is amusingly effective, creating several immersive moments and a very satisfying soundfield, particularly in the second half battle between The Creeper and farmer Taggart. Low-frequency effects provide some palpable weight to the action with a couple wall-rattling sequences from here and there. Dialogue remains precise and intelligible throughout the mayhem, making this lossless mix a marked improvement and satisfying upgrade.

Surpassing its predecessor to become that rare sequel that's better than the first, 'Jeepers Creepers II' is a fun and highly amusing creature feature. Starring Ray Wise as an angered father on the warpath, the story features an interesting group of teens trying to survive the demon's final night on the hunt before going into hibernation, which adds to the suspense and the hurried, action-packed pace. The Blu-ray from Scream Factory offers an excellent and very satisfying improvement over previous home video editions, which should make fans very happy. The folks at Scream have also compiled a worthy set of supplements, making the overall package a must for cult collectors.