Christian Black (Marlon Wayans; Scary Movie, White Chicks) has it all: power, success and an intense desire to get freaky. Into his life comes Hannah (Kali Hawk), a young, virginal girl who may not be as innocent as she first seems. Only one gets to come out on top in this hilarious film, featuring appearances from Mike Epps, Fred Willard and Florence Henderson. Plus, get ready to laugh so hard, you'll spank yourself silly with outrageous unrated deleted scenes! Fifty Shades of Black is a laugh-a-minute comedy!

Not that I was expecting much going into it, especially given the career trajectory of Marlon Wayans — or I should say, the painfully, gruelingly slow decline of his career — but 'Fifty Shades of Black,' a parody of the mildly successful as well as mildly okay 'Fifty Shades of Grey,' is just plain terrible. Granted, comedy is a highly subjective and finicky thing, but this lame attempt at satirizing the erotic romantic drama is all shades of awfulness. On the brighter side of things, this mess is an improvement over the book on which the other movie is based — which is an objective statement having nothing to the subject matter and a small highlight where Wayans' Christian Black throws the book in disgust after reading the first sentence. But Wayans' spoof, which he made with his usual partners of perversion, Michael Tiddes as director and Rick Alvarez as co-writer and producer, never comes close to making its source of inspiration submissive to its wildest, unrated whims. As with many of their other films, this production amounts to an excuse for a series of immature physical pratfalls, sexual gags, and typical potty humor.

Admittedly, the movie opens with a small glimmer of hope, as Wayans commits a variety of petty misdemeanors and robberies to support his high-class lifestyle. Or rather, for keeping up the illusion of being a wealthy man. The gag, which much too obviously is meant to be ironic, continues when the character is seen in his high-rise office and he mentions his success is due to criminal activities. Later jokes have him stealing cars that he gives away as a gift to Hannah Steale (Kali Hawk), the plain Jane protagonist who naively falls victim to Black's sexual perversions. In fact, several cracks are directed at this character and her sheltered gullibility, yet she's confusingly shown smart as a whip in a few scenes. During her contract negotiations, she's as dumb as using antiquated locks without a key — those who've watched the movie know what I mean — and too slow to understand Black's comments about his unapologetic disinterest in healthy relationships. Some of these rapid-fire quips can be amusing and possibly muster a laugh or two, but for the most part, there is really nothing funny about these people. 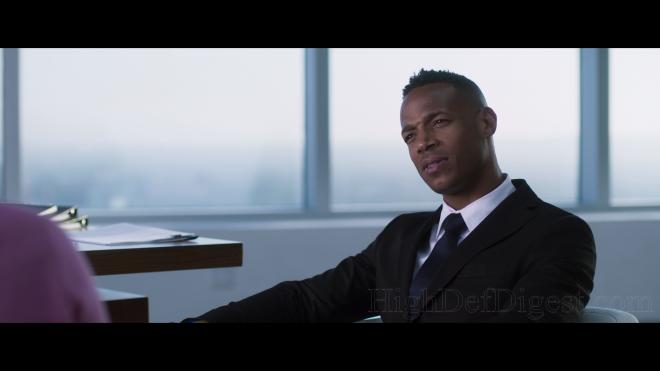 Still, a few sporadic guffaws are not enough to really make this comedy worth watching, let alone even mentioning in the raunchiest of conversations. Unless it's used to for ending one or as a convenient excuse for exiting a discussion, particularly when mentioning the well-endowed Affion Crockett or the obscenely hypersexualized Jenny Zigrino. But if there might be any reason for the most curious to sit through this yawn-inducing dreck, then it will come by way of Dr. Quinn or Mrs. Brady. That’s right! Jane Seymour and Florence Henderson cash some paychecks in cameos as Black's unwittingly racist mother and his punishingly strictly music teacher. Purposefully out of desperation for making audiences laugh, the two ladies go against type saying and doing some terribly naughty things, though that's not entirely true in the case of Henderson's Mrs. Robinson. But as for Seymour, she garners a couple earned chuckles here and there when spouting shocking comments about racial differences and thinking herself the good liberal for adopting ethnic children yet promoting stupidly comical stereotypes.

In spite of this one amiable forgiving area, 'Fifty Shades of Black' still manages to be a massive disappointment. Not that I was expecting much, but even when walking in blind with the lowest of expectations, the jokes and gags are barely capable of inducing a smile. It's clear the production was made as cheaply and quickly as possible. The script was likely written the same weekend 'Fifty Shades of Grey' hit theaters since the characters not only mention actor names but deliberately make fun of certain scenes, down to even imitating the directing style, almost to the point of being guilty of plagiarizing. It's rather incredible how quickly they made the movie, sloppily edited it together and released it wide. More fascinating is seeing Tiddes camerawork worsening with each consecutive film instead of improving. Then again, his previous works are the furthest from competent and scarcely workmanlike while the rest of the production is the end result of a speedy process so as to remain relevant. One should only watch so as to exercise facial muscles. There'll be lots of eyebrow raising, cringing in disgust, yawning and glowering.

Universal Studios Home Entertainment brings 'Fifty Shades of Black' to Blu-ray with a code for an UltraViolet Digital Copy. The Region Free, BD50 disc is housed inside a blue, eco-elite keepcase with a glossy, lightly-embossed slipcover. At startup, the disc commences with a few skippable trailers before switching to a menu screen with music and full-motion clips.

Mr. Black goes all freaky deaky with Ms. Steale thanks to a steaming hot but also a bit timid 1080p/AVC MPEG-4 encode. The photography shows a somewhat creative approach, primarily with a lightly restrained contrast. The 2.40:1 image doesn’t really pop as would be expected from a freshly-minted master, but the transfer is nonetheless in pristine shape with crisp, clean whites. The color palette is moderately affected by this with secondary hues looking a tad faded in several areas, but it’s not so terrible as to be distracting. On the other hand, primaries appear accurate and full-bodied, providing the video some energy. Also, black levels are a genuine highlight, offering inky rich shadows that never obscuring the finer details in the darkest portions and show excellent gradational differences between the various shades. On top of that, fine lines and objects are razor-sharp with distinct edges around buildings, cars and furniture. Facial complexions look natural, revealing every pore, wrinkle and blemishes in the faces of the entire cast.

The spankings, whippings and moans sound like lots of fun, but they lack the sort of punch and pleasure expected from such a newbie introduced to the world of high-def. But all bad puns aside, the movie debuts with a strong DTS-HD MA soundtrack that isn’t one for showcasing the format or one's sound system. However, the lossless mix is admirable and engaging enough for enjoying the slapstick spoof.

The front-heavy track delivers a decently wide and welcoming soundstage with a generally fair amount of activity in the background. Only, much of the activity fails to evenly spread to the other two channels, maintaining a good deal of the action to the center of the screen, even during the busiest of scenes, such as when the two protagonists ride on public transportation. Occasionally, a few effects discretely bleed to the other speakers, including the sides, which frankly, happens very rarely. Still, the rears are noticeably absent. Jim Dooley's score benefits the most, employing both left and right channels for generating a larger soundfield and exhibiting outstanding clarity and definition in the mid-range. Bass is also somewhat hit and miss, mostly reserved for specific song selections, which then provide a bit of depth and presence to the mix. With distinct and precise dialogue in the center, the soundtrack is plenty good, but also none too impressive.

Haphazardly made and sloppily put together, 'Fifty Shades of Black' is a comedy spoof that puts more effort on the spoof with a variety of stupid and largely immature gags but forgets to be funny in the process. Only the most curious daring to sit through this dreck will discover the only funny bits are with Jane Seymour while stars Marlon Wayans and Kali Hawk bore audiences to sleep. The Blu-ray arrives with excellent picture quality and a strong audio presentation, but with a barely worth mentioning set of supplements, the overall package is for fans only.

Sale Price 8.99
List Price 14.98
Buy Now
3rd Party 8.5
In Stock.
See what people are saying about this story or others
See Comments in Forum
Previous Next
Pre-Orders
Tomorrow's latest releases