A yellow cab is driving through the vibrant and colourful streets of Teheran.Very diverse passengers enter the taxi, each candidly expressing their views while being interviewed by the driver who is no one else but the director Jafar Panahi himself.His camera placed on the dashboard of his mobile film studio captures the spirit of Iranian society through this comedic and dramatic drive...

Being able to watch any movie whenever you want let alone being able to actually make any movie you want is something that I never thought could be taken for granted. Growing up in the United States as I was, I just became accustomed to the idea that the only thing holding me back from seeing certain movies at the theater or renting them was an issue of age. Once I breached the 18-year-old mark, that was no longer a problem. The only thing holding me back from seeing a particular film was whether it was legally available - even then that stumbling block rarely stopped me for long. When you sit down to watch Jafar Panahi's film 'Taxi' you're immediately struck by the notion that you're seeing something few people have ever seen before. In point of fact, you're actually watching a man commit a crime for 82 minutes. Jafar Panahi is from Iran and because of his views against the government, he is actually banned from making and releasing films at all. 'Taxi' turns out to be one of the most beautiful and important criminal offenses I've ever sat down to watch.

It's actually difficult to talk about 'Taxi' in narrative terms. This film isn't a documentary, even though it is set up to look like one, but is instead a look at Iranian life. A staged look to be sure, but there is an honesty to it that is remarkable and at times horrifying. For this film, Panahi sets himself up as an inexperienced cab driver who picks up fares in Tehran and drives them to their destination. Inside his Taxi, Panahi has discreetly placed small video cameras on the dashboard of his car in order to capture people and their thoughts in a seemingly innocuous way.

As people enter Panahi's cab, they begin to express themselves in ways that they normally wouldn't be able to in their day to day lives. We meet a teacher who believes that capital punishment is too harsh and ineffective while the man sitting in the front seat admits to being a mugger says that capital punishment doesn't go far enough as a deterrent to petty crime. Later a bicyclist who has been hit by a car is brought in the cab with his wife. He's bloodied and crying out in pain sure that he is near death. While Panahi does what he can as an inexperienced driver to get the man to the hospital, the man pleads for a simple piece of paper so that he can explicitly write out his last will and testament because otherwise his wife would be given nothing. 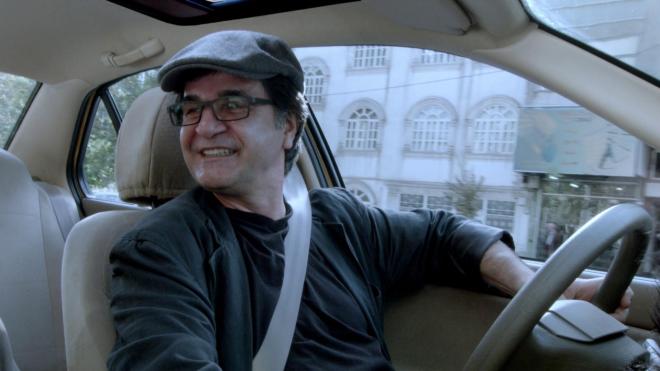 One by one, people enter Panahi's taxi cab, they share a few moments of their lives with a man they've never even met, maybe expound a little on the state of the world as they know it, and then they shuffle on. This film is a wonderful expose of Iranian life that we just do not get to see in this hemisphere very often. Sure, the film can feel a bit staged at times but it's also an incredibly brave act of defiance that is hypnotically engrossing. 'Taxi' is a film where you don't get a lot of time to see these various characters but in those brief moments, we learn a lot.

I apologize if this review and analysis of 'Taxi' seems vague or inarticulate, but the film has left me in a bit of a trance. If it were a film that had been made in the United States, it would probably be viewed as clever and arty and would probably make some people swoon at art-house film festivals. But when you keep in mind that this film was conceived, filmed, edited, and released to the world illegally, you can't help but feel like you're witnessing something incredible. This movie doesn't even have credits because of its status as an open act of defiance to the Iranian government. I'm not one to usually define films as "art" because I feel the term is entirely too subjective and often misused, but Jafar Panahi's 'Taxi' is art. Art has the power to change your perspective on a topic, to pull out emotions and challenge your personal convictions. This movie does all of that and more. As free as we are, where we're allowed to see any film we wish, watch any television program or read any book without fear of reprisal, 'Taxi' is a beautiful reminder that there is a world out there where people don't get to live this way. Simply put, 'Taxi' is absolutely a must see film that should be experienced by as many people as possible.

'Taxi' arrives on Blu-ray thanks to Kino Lorber. Pressed onto a Region A locked BD25 disc, the disc is housed in a standard Blu-ray case and opens directly to a static image main menu featuring traditional navigation options. Also included with this set is the essay "The Art of Defiance" by Jamsheed Akrami that is an absolute must read!

In order to fully appreciate the 1.78:1 1080p image transfer for 'Taxi,' you must also appreciate the conditions which this film was produced. In order to film this movie without being noticed, Panahi had to use commercial grade digital cameras that could be easily hidden around his dashboard without drawing outside attention. To that effect, this is a very strong and beautiful looking movie. It never leaves the car so it maintains a sense of intimacy. Detail levels are strong throughout but are limited to whichever camera is being employed for that particular shot. Colors are bright and vibrant, although they can have that "washed out" look that some video presentations can have. This movie was made during daylight so there really isn't much of black levels to speak of but shadows offer enough object separation to give the image a strong sense of depth.

With a DTS-HD MA 5.1 mix, the audio for 'Taxi' manages to create an immersive experience allowing you to feel like you're in the vehicle and along for the ride. As there isn't any dynamic scoring to the film, it's very subtly interspersed, the mix is comprised of dialogue and background audio. Dialogue is clean and clear and easy to hear without any outside interference. The sound effects work largely consists of traditional driving sounds, which if you've ever driven through city traffic sounds distinct and familiar. When the doors to the cab open it feels like an entire world of sounds floods into the scene and can really be a wonderful shake up to the mix as for a brief moment you're hearing the real sounds of Tehran.

Art of Defiance: This is a fantastic, must-read essay by Jamsheed Akrami that provides a bit of history about Jafar Panahi and various aspects of this film.

Jafar Panahi's 'Taxi' is a fantastic piece of movie making. It's a movie that sets out to tell a very intimate and human story and provide the world a glimpse into a society that we really only ever get to see in short news bulletins. It is a must see film, plain and simple. Kino Lorber has brought 'Taxi' to Blu-ray in fine order with a strong A/V presentation. Sadly due to its status and circumstances in which it was created, the only extra features is a fantastic essay and a trailer. Just the same, I'm still going to call this release highly recommended.

Sale Price 19.99
List Price 34.95
Buy Now
3rd Party 14.39
In Stock.
See what people are saying about this story or others
See Comments in Forum
Previous Next
Pre-Orders
Tomorrow's latest releases