Overview - A Marine Corp lifer, starting his last tour of duty before retirement, sees the bumpy road his life has taken become more complicated, due to feisty recruits, by-the-book officers and a salty ex-wife to whom he's still attracted.
OVERALL
Give It A Rent

Clint Eastwood knows how to play a mean-tempered, tough, and belligerent old geezer with a hardened and incorrigible past. With his mumbled, raspy voice and a furrowed, always-squinting brow that's practically cemented onto his face, Eastwood is a born-natural for these types of roles. In 'Heartbreak Ridge,' he portrays an aged marine sergeant with enough experience to earn at least a couple of stars on his collar, but his confrontational, dyed-in-the-wool personality has affected and limited his career along with his personal life. When talking about the legendary actor and director, this comedic war drama may not immediately spring to mind, but his performance as Thomas "Gunny" Highway is one of the best of Eastwood's career and should be one of his most memorable.

A decorated soldier from the Korean War, Gunnery Sergeant Highway is nearing retirement from the Marine Corps, but feels like he has one more battle in him before finally calling it quits. In spite of his surly disposition, he somehow manages a transfer to his old unit where he can train troops for combat. Once there, he's reunited with his buddy, Sergeant Major Choozoo (Arlen Dean Snyder), and finds a commanding officer, Major Powers (Everett McGill), who thinks the Medal of Honor recipient a relic. As a result, he's put in charge of shaping up a recon platoon considered the most disobedient and out-of-control group of jarheads on the entire base. And adding insult to injury, his ex-wife, Aggie (Marsha Mason), still lives in town and wants nothing to do with him.

From the moment we meet Gunny, sitting in a jail cell and surrounded by other inmates listening intently to his war stories, we instantly realize the veteran is not the type of man you want to offend. And Eastwood does a superb job as the feisty old-timer set in his ways, with dialogue that makes the character both lovable and intimidating. In fact, the movie comes with arguably some of the best one-liners ever uttered on film, and each one is delivered to perfection by the incomparable Eastwood. It doesn't matter who he's talking to, the Gunner Sergeant is quick on his toes and slings out insults with a squint-eyed face like he were breathing air. If his words are not enough to make someone back off, the man is just as lively with his hands, and makes men three times his size weep.

I'm not doing this because I want to take long showers with you a***oles and I don't want to get my head shot off in some far away land because you don't habla, comprende?

The story not only presents one hilarious moment after another, it also possesses a satisfying charm as old-fashioned training tactics meet a new, modernized military. But when given such a ragtag group of slackers, Gunny's outdated methods seem like the perfect tool for getting them into shape. And with Eastwood behind the camera as well as in front of it, the movie runs its course with hardly a hiccup or disruption to the humor. 'Heartbreak Ridge' comes across fully aware it's making light of its more serious side (a war hero nearing mandatory retirement and wanting to repair the damage caused by his gung-ho attitude) and slowly brings that drama to the forefront in subtle, entertaining fashion. And in so doing, the film distinguishes itself in a unique and memorable way.

It's only when the platoon is activated to invade Grenada that the flow feels suddenly interrupted by the burst of life-threatening combat. Though a couple of scenes were inspired by real-life events, they almost seem tacked on for the sake of providing the movie with some action, rather than the logical outcome of everything that came before it. Of course, this is only a small defect in an otherwise amusing movie. 'Heartbreak Ridge' may not be one of Clint Eastwood's iconic films, but its greatest strength lies in the legendary actor's top-notch performance.

Warner brings 'Heartbreak Ridge' to Blu-ray with a slightly above average, fairly inconsistent picture quality that is on occasion also a bit disappointing. For a 24-year-old movie, the 1080p/VC-1 transfer (1.85:1) isn't completely horrible, as there are some strong moments to be enjoyed. Outdoor scenes in particular offer comfortably bright contrast levels with bold primaries and healthy skin tones. Details can be pretty impressive at times, with excellent, crisp clarity of uniforms and surrounding foliage, but the film as a whole doesn't quite match the resolution of some of the best catalog releases.

Where we begin to find trouble is mostly in dimly-lit interiors, especially when Gunny is hanging out in his favorite bar. Film grain suddenly spikes to the point of being a distraction and doesn't look much better than standard-def video. Blacks are, for the most part, accurate and cleanly rendered, but in these same indoor sequences, they are a bit too deep and ruin shadow delineation. Still, the transfer makes a decent presentation, and I imagine fans will be satisfied. 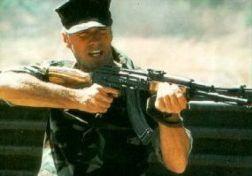 On the audio side, the DTS-HD Master Audio soundtrack is bit more attractive, with some of its best moments reserved for the final act. The dialogue-driven comedy delivers clean, intelligible vocals and surprisingly good channel separation for a wide and enjoyable soundstage. Dynamic range is in pretty good shape, though never really pushed to any extent, and imaging is pleasing yet nothing to write home about. Low-frequency effects are unexpectedly punchy, providing the few scenes of action with some weight. Rear speakers are mostly silent in terms of ambient sounds, but when troops are called to duty, the surrounds kick in with the sounds of bullets whizzing by. Overall, the lossless mix is not one to impress neighbors, but it's a good, clean presentation nonetheless.

As with previous DVD releases, this Blu-ray edition of 'Heartbreak Ridge' comes only with the original theatrical trailer - only this time in HD.

Not often found on the top of the list, 'Heartbreak Ridge' features one of Clint Eastwood's best performances as "Gunny" Highway and is a very entertaining war drama overall. Equipped with some of the funniest one-liners in the Eastwood canon, the legendary actor/director brings an intimidating charm that only he could pull off, and the film should be an instant favorite of fans everywhere. The picture quality of the Blu-ray doesn't make much of an impression, but the lossless audio offers a slightly better presentation. The lack of bonus material is a terrible travesty, but I can't imagine fans finding too much to complain about in this Eastwood favorite.

Sale Price 11.19
List Price 14.98
Buy Now
3rd Party 54.78
In Stock.
See what people are saying about this story or others
See Comments in Forum
Previous Next
Pre-Orders
Tomorrow's latest releases