Overview - He was where he shouldn't have been and saw what he shouldn't have seen. Now, who will believe the word of a career thief and ex-con? Who will trust Luther Whitney when he says he saw a woman killed--and that the man responsible for her death is the President of the United States?
OVERALL
Recommended

Directed and produced by Clint Eastwood, 'Absolute Power' is an exciting, suspenseful genre thriller with Eastwood's fingerprints all over it. Based on the novel by David Baldacci, and with a screenplay penned by William Goldman ('The Princess Bride'), Eastwood takes on the thriller genre with his own unique directorial style.

Luther Whitney (Clint Eastwood) is a world-renowned cat burglar. He's sly and clever. At the beginning of the film he breaks into a mansion in the middle of the woods and uncovers a secret room filled with money and jewelry. As Whitney first hacks the security alarm, and then ascends the stairs, the camera rarely cuts away. Eastwood the director creates a sense of foreboding dread by slowly getting the scene started.

While in the secret room, Whitney is surprised by two people, a man and a woman engaging in some rough sex. From behind a two way mirror Whitney watches as the tryst becomes more and more violent, culminating with the woman being shot by two unidentified men before she's able to stab the man who's beating her.

While we find out pretty soon who the man is, I won't spoil it here because that's half the fun. The opening scene show's some masterful direction on Eastwood's part. Gritty and raw, he builds suspense without quick-cut action scenes. Instead, he lingers on the events as they unfold. It's almost hard to watch at times. He makes it seem so genuine.

Whitney is a lonely man, estranged from his daughter. I know what you're thinking, yet another film with Clint Eastwood as a man on his own who has family, but they can't stand him. His daughter is played by Laura Linney. They have a difficult relationship. He was in prison for burglary for much of her childhood. It's easy to see why she has trouble forgiving him.

When the woman is found murdered by the police, grizzled police detective Seth Frank (Ed Harris, 'Apollo 13') is called in to investigate. Frank is told that there are only a handful of people who could have pulled off the burglary at the house, and Luther Whitney is one of them. Frank knows Whitney is involved, but he doesn't know how deeply. Their relationship and conversations are some of the most gratifying scenes in the movie.

The entire film has a Hitchcockian feel. A noir thriller, with devious villains, and stalwart heroes. Scenes are packed with suspense without any of the gimmicks that have become so prevalent in this genre. After so many political thrillers in the years since that rely heavily on convoluted plots and nauseatingly quick action scenes, it was nice to go back to a film that takes its time and builds suspense by just letting us observe.

'Absolute Power's 1080p VC-1 encoded high definition presentation looks great. This transfer is faithful to the image I remember seeing on the big screen back in 1996. The first part of the film is either dimly lit or almost completely dark. Delineation works well in the dimly lit scenes in the house, while Whitney is looking on from the secret room. When he's running away through the forest, it gets very dark. Crushing becomes a minor problem a few times, but nothing substantial. Fine detail is pumped up from the previous DVD release, although some softer shots do creep in. Skin tones are right on the money. Colors are beautiful and rich, whether the greens of the place where Whitney's daughter goes jogging, or the grays of the surrounding buildings in a city square. This video presentation is impressive all around. Fans of the movie will be happy that 'Absolute Power' has been treated with care.

The DTS-HD MA 5.1 audio presentation is another strong point on this release. One of the most notable things about this audio presentation is the soundtrack provided by Eastwood favorite Lennie Niehaus, who has worked on many of Clint's films over the years. The haunting soundtrack ebbs and flows with the action on screen, helping to build suspense. It's prioritized through the front channels, but bleeds into the rears, giving us a heavy dosage of Niehaus' beautiful music. Dialogue is a tad soft, as Eastwood and Gene Hackman have a tendency to mumble at times. Whispers are also a little hard to hear. LFE is engaged numerous times during suspenseful scenes, especially when a car ends up tumbling down a cliff. Overall, it's a sturdy presentation that aides the movie in creating the exciting atmosphere it's going for.

Not one special feature in sight. The DVD contained a few features, nothing noteworthy though. All the special features on the DVD were text. They had cast and crew bios along with behind the scenes notes. Still, those weren't ported over for this edition. Can't say I'm sad about that, but I am sad that no new special features were commissioned for this, like a newly recorded commentary or something . I guess we can only hope more special features for this title and other movies are included in the gigantic Eastwood Blu-ray collection coming out the same day as this release. 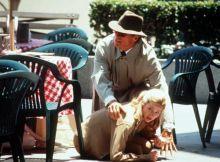 I really like 'Absolute Power.' On the surface it's a generic thriller involving political intrigue and dirty politicians. Nothing is new on that front. Where the movie really shines is in the direction of Eastwood, who can create a gripping situation with only his actors and his lingering camerawork. 'Absolute Power' has one of the best opening scenes out there. It's also a pleasure to announce that Warner didn't skimp on making the movie look and sound as good as possible. The utter lack of special features is an annoyance, but still, this title comes recommended. If you're a big Eastwood fan you may want to get this as part ofthe mondo Blu-ray collection.

Sale Price 4.99
List Price 14.97
Buy Now
3rd Party 29.99
In stock on December 9, 2020. Order it now.
See what people are saying about this story or others
See Comments in Forum
Previous Next
Pre-Orders
Tomorrow's latest releases