'Where Eagles Dare' - The mission is clear. Get in. Get the general. Get out. Commandos charged with freeing a U.S. general from an Alpine fortress should also be told to trust nothing - including the search-and-rescue orders just issued.

'Kelly's Heroes' - They were goldbricks until they found out about the gold bricks -- a fortune in Nazi- confiscated bullion! Clint Eastwood reups with the director of Where Eagles Dare for this alternately action- filled and tongue-in-cheek tale of GIs who decide to get something extra out of the war.

As part of their Action Double Feature line, Warner Brothers has paired two Clint Eastwood pictures directed by Brian G. Hutton that are set during WWII: 'Kelly's Heroes' and 'Where Eagles Dare.' What's interesting about both pictures is that Eastwood's character is more passive than audiences are used to seeing him. In both films, events frequently push him along through the story rather than him being the driving catalyst.

'Kelly's Heroes' (2.5/5) is a combination military comedy and bank heist film. Stationed in occupied France, Private Kelly (Eastwood) captures a German Intelligence Officer and, while interrogating him, learns there are 14,000 gold bars, valued at $16 million, hidden in a bank behind German lines. Against the judgment of his platoon sergeant Big Joe (Telly Savalas), Kelly organizes a team to steal the loot. As the logistics of mission are planned, more people are needed to complete the task, meaning everyone's share gets smaller while making it harder to keep a secret.

The film has an odd tone. Although a comedy reminiscent of sitcoms like 'McHale's Navy' and 'M*A*S*H,' there are some serious consequences for those involved. An American fighter pilot destroys some of their equipment en route, thinking they are Germans; soldiers die while crossing a live minefield; and a bridge they need to cross is destroyed.

'Kelly's Heroes' is flawed on a few fronts due to being a product of its age. First, it's too long and suffers from lulls in both action and laughs. An editor really needed to take a good whack at the 143 runtime. More importantly, the film was made during the Vietnam War, and the soldiers are presented in quite different way than the last WWII movie I watched ('Saving Private Ryan'), which was about the brotherhood and self-sacrifice of American soldiers. Here, the regular joes are quick to take Kelly's offer in order to get a little something for themselves. Their attitude being it's better to risk their lives to make a buck for themselves rather risk their lives for nothing in the war, a sentiment that, while believable, is not usually associated with WWII. Kelly's motivation is much more plausible when it's revealed through dialogue that he used to be a lieutenant but was demoted when he took the blame after a friendly-fire incident that wasn't his fault. And not to hit him with negative waves, but Oddball (Donald Sutherland) is an anachronistic character. He's a hippie 20 years too soon and doesn't create the intended comic relief.

Still there are a few laughs that make it a decent watch. Carroll O'Connor is very amusing as a Major General Colt, who breaks out in fits of anger reminiscent of Archie Bunker as his men continue to disappoint him until he overhears Kelly and his men on the radio and thinks they are fighting the war. Don Rickles as the supply sergeant nicknamed "Crapgame" is another highlight. There's also a funny allusion to 'The Good, the Bad and the Ugly' during the climax.

'Where Eagles Dare' (3/5) is a thriller made two years earlier. A mainly British task force, led by Major John Smith (Richard Burton), is put together to rescue an American general with knowledge of the upcoming Normandy Invasion. The general's plane was shot down and he's been taken to an Alpine castle for interrogation. U.S. Army Ranger Lieutenant Morris Schaffer (Eastwood) is part of the team but is constantly out of the loop as Smith runs the show.

While parachuting in, the radioman breaks his neck. The men head on to an abandoned farmhouse. Smith says he's going to check on the body to retrieve the code book, but sneaks off to a nearby cabin where he meets another member of the team: agent Mary Elison (Mary Ure) who is known only to him and it is intimated that he slept with her, making the viewer wonder how committed and focused Smith is.

In the first of what will be too many twists to the story, Smith informs Schaffer (and the audience) that the plane crash and the captured General are all a ruse, indicating not all is as it seems. Smith takes Schaffer into his confidence because he is not a member of British Intelligence, which may be compromised, so he can be trusted. More team members turn up dead, yet everyone remains nonchalant as they go ahead with their plans.

In a Bavarian tavern, Smith and the team pose as German deserters and turn themselves in. The group is divided with Smith and Schaffer going in one car. Naturally, they escape and send the bad guys car over a mountainside, which explodes inexplicably just from rolling down the hill. Smith and Schaffer make their way into the castle by way of cable car. Once inside, the plot twists and turns as crosses and double-crosses are revealed along with characters' true identities, stretching the plot so thin its believability is strained.

The pacing is sluggish here at well. The film doesn't make the most of its 155 runtime and could have been trimmed. The action is hokey at times and slightly repetitive, but the stunt team does some very good work. There are enough explosions to delight "SCTV" critics Big Jim McBob and Billy Sol Hurok, and others will surely enjoy them as long as no thought is given to how they brought all the equipment with them.

'Kelly's Heroes' and 'Where Eagles Dare' are mindless entertainment for guys who like to enjoy movies with beer while seated in their comfy chair. Best suited for dads and grandpas with an interest or connection in WWII who are fans of Eastwood and action films.

Warner Brothers brings 'Kelly's Heroes/Where Eagles Dare' to high-definition on BD-50 Blu-ray discs housed inside a standard blue keepcase. Each disc goes directly to the menu screen without any promotional advertisements. The discs are reported to be Region A.

'Kelly's Heroes' (3/5) is presented with a 1080p/VC-1 encoded transfer at an aspect ratio of 2.40:1. The source looks clean, with some minor wear, and film grain is evident though never distracting. The color palette is mainly earth tones of greens and browns and the natural hues look realistic. There is occasional use of more vivid colors. For example, the red credits pop of the screen. Blacks are deep and there's quite a bit during the film's opening sequence which takes place at night.

Textures and details come across fairly well. Background items from walls in the German town to props around Crapgame's office/tent add authenticity and realism to the shots. However, softness creeps into the shots often and some objects are occasionally lost due to poor shadow delineation. Depth is on display most often in outdoor exteriors as Kelly and his team is advancing towards their goal.

'Where Eagles Dare' (3/5) has the same video specs and the source looks like it was kept under the same conditions. The color palette is even more limited, as most scenes are usually snow-covered exteriors or dark interiors, both of which are predominately populated with black and gray Nazi uniforms. When other colors are used, they have a natural hue, except for the bright reds of fake blood. The red-oranges seen in the fire derived from explosions are the most vivid.

The picture offers good contrast. Different shades of white are evident when the men are in their Alpine gear along the snowy mountainside. Blacks are rich though there is occasional crush. Shadow delineation is questionable at times. The edges aren't very sharp and texture detail is hit or miss.

The high definition spoils the magic of matte shots, such as when Smith and Schaffer first spy the castle grounds through binoculars and see the German troops marching. The same goes for the rear projection in the action scenes featuring the leads, such as their escape on a motorcycle and sidecar, Burton driving a bus, and the cable-car sequence. However, these limitations of the state-of-the-art effects help accentuate the depth of other scenes. 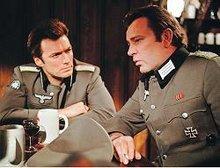 The audio track for both discs is DTS-HD Master Audio 5.1 but neither makes the most of it, likely limited by the sources.

'Kelly's Heroes' (2.5/5) - The dialogue is isolated to the front center channel. The surround and subwoofer get some play from the effects but gunfire and explosions don't deliver a lot of oomph, which contributes to a limited dynamic range. There is no imaging of sounds. The music throws off the balance of the mix as Lalo Schifrin's score and the theme song, "Burning Bridges" by The Mike Curb Congregation, sound remastered and too polished, drawing attention to the flaws of the other elements.

'Where Eagles Dare' (2/5) - The audio is similarly front heavy with very little ambiance other than a little bit of wind and the obligatory gunfire and explosions that are heard through the left and right front speakers. Again, there is no imaging of sounds through the channels. Ron Goodman’s dramatic score is the only thing that wakes up the rear speakers with any regularity. The dialogue is clear and understandable for the most part; however, the foley effects don't mesh well with the looped dialogue, augmenting the inauthenticity of the speaker in the scene. Otherwise, the elements are mixed together better and the dynamic range is fuller.

While I wouldn't think to recommend either title, especially to young movie watchers, both 'Kelly's Heroes'(Overall Grade: 2/5) and 'Where Eagles Dare' (Overall Grade: 2.5/5) have their charms. The source limitations are evident in high definition so this set is best left for people who are already fans of the movies who aren't overly particular about the A/V presentation. Give it a rental, especially the latter, if you're curious about the inspiration for Iron Maiden's song of the same name.

Sale Price 4.88
List Price 12.97
Buy Now
3rd Party 49.99
In Stock.
See what people are saying about this story or others
See Comments in Forum
Previous Next
Pre-Orders
Tomorrow's latest releases