Screenwriter Mark Christopher gets a Christmas present that isn't on his Santa list: a 17-year-old delinquent named Susan, deposited in his bachelor pad by a cop pal who doesn't want to see the kid spend Christmas behind bars. Touched by Susan's plight, Mark decides there's only one way to keep her out of juvie: marry her in name only and get an annulment when she comes of age. But after a Vegas elopement, Susan isn't so sure she wants to be the ex-Mrs. Christopher. Dick Powell (in his last film role before devoting himself to a hugely successful TV career) and Debbie Reynolds play the (maybe) mismatched couple in a big-hearted romantic comedy from animator-turned-director Frank Tashlin that makes merry use of its Yuletide setting.

It helps to know what a movie is going to be right when the story gets going. Some movies try to be horror films but are actually more like dramas, others try to be comedies but never really nail the tone and become far too serious. When a movie nails its opening moments and puts you 100% at ease with what you're about to see, it makes it easy to just put your feet up, get comfortable, and just enjoy the ride. 1954's 'Susan Slept Here' directed by Frank Tashlin from a screenplay by Alex Gottlieb stars Dick Powell and Debbie Reynolds in a delightful Christmas time madcap comedy that stays lighthearted and fun from frame one to the closing shot.

Mark Christopher (Dick Powell) is an Oscar-winning screenwriter who has hit a slump. Ever since he won the golden statue, the studio has had him churning out comedic dreck that leaves him feeling soulless and hollow inside. Mark wants to write some serious drama for a change but the studio is having none of it. His longtime secretary Maude (Glenda Farrell) holds nothing back as she types up the pages of dialogue he hands her. What he's writing is absolutely terrible, but the studio loves it. While his best friend Virgil (Alvy Moore) tries to help his old Navy buddy find that creative spark, Mark is just going to have to make a dramatic change to his life if he ever hopes to find that burning passion to write a story worthy of the Oscar resting on his shelf.

That spark arrives in the form of troubled teen Susan Landis (Debbie Reynolds). Mark's old friend and former technical consultant Sgt. Sam Hanlon (Monty Maizel) and his partner arrested Susan on Christmas Eve for hitting a sailor over the head with a bottle. Hanlon doesn't want to toss the kid in the clink for Christmas, but he can't exactly let the kid loose either. Hanlon figures her troubled tale may prove to be a good story for Mark to write so he figures his place would he the perfect spot to stash the girl. Things start out bumpy at first, but they even out when they discover they have a lot more in common that one would think. What should have been a simple research project turns into an unlikely romance and one that is sure to anger Mark's aristocratic girlfriend Isabella (Anne Frances). 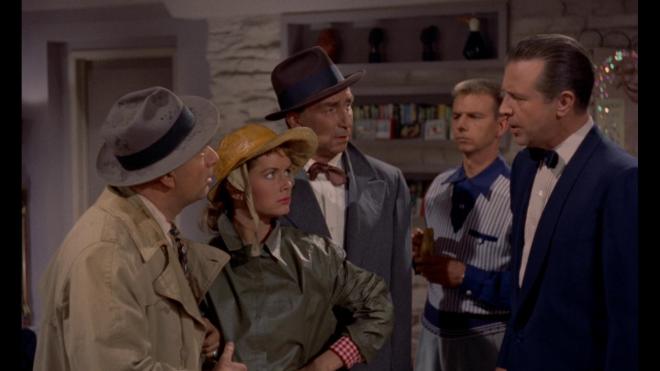 Right out of the gate, you get a sense of the type of movie 'Susan Slept Here' is going to be. Like many films, 'Susan Slept Here' opens with some framing narration from one of the characters. What makes this character so unique is that it is actually the voice of Mark's Oscar statue that rests over the fireplace. At first, it may seem a bit peculiar that a statue is telling the story, but in the context of this little odd comedy, it's actually a perfect framing device. It puts the story into the context that Mark is struggling with his career and chasing former glory while also experiencing a dramatic upheaval to his life. It's also a hoot when Susan uses the statue to crack walnuts, so there is plenty of good comedy to come from this "character."

'Susan Slept Here' was Dick Powell's final film before he moved to a successful television career. While an older man of sorts, he and Debbie Reynolds share a goofy and delightful chemistry together. Based on the play by screenwriter Alex Gottlieb, the film plays fast and loose with the plot points and maintains a nice, plucky momentum. Laughs may not be roll on the floor gut-busters, but the genuine sense of humor the story carries keeps you giggling and holds a smile on your face. Debbie Reynolds was hot off her turn in 'Singing In The Rain' and all of her spunky charm and character is on screen once again here. The plot may not make a whole lot of sense if you break it down, but between Powell and Reynolds playing to each other's comedic strengths, you'll be more than willing to let a few contrivances slide for the sake of a laugh or two.

Another fun aspect of discovering a movie like 'Susan Slept Here' is that it's actually a nice little Christmas movie. Growing up in Michigan, my idea of Christmas isn't complete unless there are a couple inches of snow on the ground. So, a movie that takes place in L.A. during this festive holiday season is usually a tough sell for me, but thanks to some great production design work and some clever background tunes, you at least feel like it's the right time of year even if the weather outside Mark's bachelor pad doesn't quite match up. What makes 'Susan Slept Here' work is its light and fun tone. Even when things start to get "serious" as the plot requires, the humor is never lost and a good joke isn't too far behind.

'Susan Slept Here' arrives on Blu-ray thanks to Warner Archive Collection and is pressed on a BD50 disc. Housed in a standard Blu-ray case, the disc opens directly to a static image main menu with traditional navigation options.

You have to love it when a Technicolor classic makes it to Blu-ray. The 1.66:1 1080p transfer is simply gorgeous. Film grain is retained allowing for a pleasing amount of detail to appear on the screen. Fine facial features, costuming, and the impressive set design work are all on display. Colors are vibrant and beautiful as primaries have that extra lively Technicolor pop to them. Black levels are deep and inky allowing the image to have a fantastic sense of depth without any crush issues or hard contrast blooms. The print sourced for this transfer is also in fantastic shape with only some incredibly mild and faint speckling to speak of. All around this is a spectacular image transfer and one fans of the film should be extremely excited to see on their home displays.

With an English DTS-HD MA 2.0 track, 'Susan Slept Here' has a wonderful auditory presence to it. This is actually a mono track that is simply played through both the left and right stereo channels, but the results work very well. The mix has a notable sense of space and dimensionality that makes Mark's little bachelor pad feel like an actual room instead of a constructed set. Dialogue is crisp and clean and easy to hear throughout, which is important because there are a number of fast-talking dialogue moments throughout the film. The score by Leigh Harline is also a delight and never crowds the mix. Sound effects can sound a tad canned at times, but I gather that's a fault of the original production mix and not an effect of this transfer. All around this is a delightful audio track.

'Susan Slept Here' turned out to be an unexpected little joy of holiday filmmaking. It's a little odd watching a Christmas movie just before summer is supposed to start, but this little flick starring Dick Powell and Debbie Reynolds put me in the festive holiday spirit, and it also managed to make me laugh a few times! Warner Archive Collection did an impeccable job with A/V presentation for this title. Sadly, extra features are virtually nonexistent, but the quality of the film and the transfer it enjoys makes this an easy Blu-ray to call recommended.

Sale Price 17.99
Buy Now
3rd Party 17.95
In Stock.
See what people are saying about this story or others
See Comments in Forum
Previous Next
Pre-Orders
Tomorrow's latest releases