Portions of this review also appear in our coverage of previous Blu-ray releases of 'Top Gun.'

Ever since Quentin Tarantino's comments about 'Top Gun' went viral, it's become increasingly difficult to watch the movie without taking note of the story's unintentional undertones. Admittedly, the 80s action favorite does come with a rather thick air of "bromance" throughout. The plot is essentially about a team of men learning to work closely together. And there is really nothing wrong with that. But it's funny to think back on the big fuss and hubbub the public made about this Tom Cruise vehicle, basically the one which launched him into mega stardom. At the time, it was thought of as the quintessential "guy" movie and celebration of the masculine archetype. Today, especially with Tarantino's analysis in mind, I'm not sure one can say that still holds true.

I don't agree or completely accept Tarantino's rather astute interpretation, as it's not entirely accurate or all that well supported by the events in the story. I mean, Cruise's character does get the girl in the end, and they both ride off into the sunset together on his Ninja 900. Of course, the now-famous filmmaker's observation was clearly meant as a joke, not a serious analysis, but he does touch on one thing that I somewhat begrudgingly see eye to eye with, the one small thought which started me going off on this strange tangent. There is a certain level of style and smarts in the script by Jim Cash and Jack Epps, Jr. Not quite the subversive details which Tarantino makes reference to, but rather, the plot's structure and the way in which the narrative unfolds. Frankly, it's very well done.

Cruise's Pete Mitchell really lives up to his moniker, "Maverick." The guy may be good at what he does, but he's also very dangerous and far too reckless. Director Tony Scott plays out this aspect of the story particularly well as we see the young hotshot fighter pilot succumb to his overly-inflated ego, the type of character which Cruise always seems best suited for. Scott, himself, gets dangerously close to also losing viewer's interest as Maverick grows to be a bit of an annoyance to others as well as to the audience. It's not easy to sympathize with someone who's this much of a prick — the kind of person who doesn't realize he's not as suave and charming as he thinks he is. But as the story continues, we wonder if that's not the point. Halfway into it, just when we can't stand to be around the guy anymore, it seems even Maverick is starting to annoy himself. 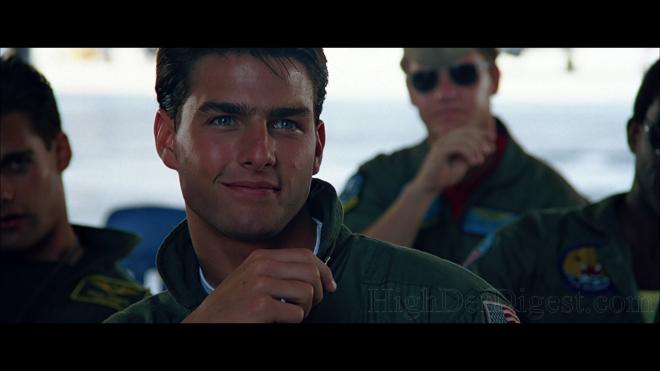 This is another aspect of the narrative that shows intelligence and clear forethought on the part of the filmmakers. The protagonist is surrounded by others wanting to help him on his journey towards self-improvement, to realize that the world, and the battlefield in general, cannot be won by charm and talent alone. While others are shooting at him, aiming to kill him and his fellow soldiers, he has to learn to work with others. Maverick's greatest and most difficult hurdle is himself. His instructors (Tom Skerritt and Michael Ironside) try to impart this lesson. His school competitor, "Iceman" (Val Kilmer), offers advice, however condescending. Even those closest to him, Kelly McGillis's "Charlie" and Anthony Edwards's "Goose," make attempts for him to understand this valuable truth. Unfortunately, just as he's coming around, a fatal accident finally makes him realize how much of danger he can be during combat.

It may seem like I'm mostly praising Tony Scott's 'Top Gun.' But really I'm not. The film has unfortunately not aged well, moving from one cornball moment to the next. It's essentially a large soup of histrionic melodrama with men dressed in uniform. How it actually inspired others to the join the navy during the movie's height and popularity is somewhat of a mystery? But in all honesty, I'm giving it credit where credit is due. For being based on an article about the Fighter Weapons School in Miramar, the original script is very well-written with a concise and terse story at the center. At its best, 'Top Gun' can be enjoyed as an entertaining nostalgia piece. But at its worst, it's as unintentionally hilarious action flick, made all the funnier by Tarantino's interesting observations.

Boasting it as a two-disc 30th Anniversary Limited Steelbook Edition, Paramount Home Entertainment repackages the same Region A locked, BD50 Blu-ray opposite a DVD-9 copy housed inside an attractive steelbook case. Joining them is a flyer for a digital copy of the movie along with new cover art. At startup, viewers are taken to the main menu with full-motion clips and music.

For this 30th anniversary edition, 'Top Gun' makes yet another flyby on Blu-ray with the same AVC-encoded transfer as the previous releases from 2008, the 2011 anniversary copy and the 3D version. While the overall quality of the picture is not completely underwhelming or disappointing, it still remains unsatisfying for a favorite 80s action drama in dire need of a remaster of the original elements. Most notably, the presentation appears to be lacking the sort of thick natural grain expected from a film of this stock and period, which could be the result of some mild digital tampering. On a few occasions, the faces of actors appear a tad waxy and a bit too smooth, but for a majority of the runtime, wrinkles, pores and negligible blemishes are plainly visible. Overall, definition and clarity is acceptable with several generally pleasing moments, but the 2.35:1 image is not particularly sharp or detailed, largely crashing and burning on the softer side of things.

The high-def transfer ultimately hasn't aged well over the years, with some decent detailing and a few spots of well-defined lines clothing and buildings. The image hardly has a moment where it truly shines or impresses thanks to some below average contrast levels and some instances of ringing around edges. Colors appear overly saturated and somewhat embellished, but much of that can be the result of Tony Scott's preference to emphasize warmer hues in the photography. Blacks maintain some semblance of accuracy, but tend to take away some of the finer details in the shadows.

In the end, this high-def presentation doesn't quite make the cut to join the elite school of the top one percent. It doesn't even get points for second place.

Celebrating thirty years of flying in the danger zone, 'Top Gun' lands with the same equally enjoyable lossless tracks as before. Whether we're listening to the Dolby TrueHD 5.1 soundtrack or the DTS-HD MA 6.1 option, the mix delivers with a wide and expansive imaging that's highly appealing.

The soundstage displays excellent channel separation with even, persuasive movement between the channels and very well-prioritized vocals in the center. When the F-14s scream across the screen, they fly by with ease while dynamic range remains stable without much distortion. Low-frequency effects are accurate and authoritative with powerful, thunderous roars. Rear activity comes alive during the dogfights, extending the soundfield with lots of action and commotion. The real winner, of course, is the score and song selection, filling the entire front soundscape and subtly bleeding into the surrounds for an effective and engaging presentation.

Only minor nitpick would be the high-rez soundtrack coming off a tad too loud during those scenes with the jet fighting, bringing too much attention to itself because it sounds like someone turned up the volume. Aside from that, the 80s actioner is a fun and enjoyable listen on Blu-ray.

Full of 80s machismo and shirtless volleyball, Tony Scott's 'Top Gun' is an over-the-top cheese-tacular action flick that somehow grew into a cultural phenomenon. The movie catapulted Tom Cruise's career into mega-stardom while also raising the number of naval recruits at the same time, and it strangely endures both as an 80s fan favorite and as the butt of many, many jokes, often serving as the prime example of an action feature with strong homoerotic undertones. The Blu-ray unfortunately arrives with the same audio and video presentation as the other previous high-def releases, which is both good and bad but ultimately unsatisfying. Supplements are also identical, but Paramount celebrates the film's 30th anniversary with a special limited steelbook edition, making this package worthwhile only to those who have yet to purchase.

Sale Price 55.99
Buy Now
3rd Party 55.99
See what people are saying about this story or others
See Comments in Forum
Previous Next
Pre-Orders
Tomorrow's latest releases