"Football doesn't build character, it weeds out the weak ones."

The sports melodrama is a genre steeped in tradition. While it may not be one that wins multiple awards, it's one that always proves to be a crowd pleaser. Even if you're not much of a sports fan, it doesn't take much effort to get hooked into the story and begin to root for an underdog or a team that doesn't have much hope of winning a championship but who came together to win an important game. Then there's the iconic historical player, the guy who inspires to the team to greatness. We've seen dozens of movies like this and no doubt there will be dozens more made. While some inspirational sports icon films work, others fizzle out by falling victim to routine. 'My All American,' based on the true story of the University of Texas Longhorn defensive safety Freddie Steinmark is a film that tries to hit the audience in the emotional core, but because it plays to convention and cliche, the material never builds into something special - which it easily could and should have

Freddie Steinmark (Finn Wittrock) is a star football player. Ever since he was small his father Fred (Michael Reilly Burke) has drilled and grilled his son to be excellent in every endeavor he takes on - whether on the field or in school. This isn't a case of a father living through his son's accomplishments, but instead an effort to prove to his child that if he puts his mind and his will into something he should give 100% and he will succeed. When new guy to the high school team Bobby Mitchell needed a little faith that the team could actually win, Freddie was there to show him what the team could do and help Bobby believe they were championship ready.

Football came naturally for Freddie, as did his standing in school. As the most popular kid in class, the girls swooned - especially Linda (Sarah Bolger). When the two start dating they became inseparable. When it came time for Freddie and Bobby to go to Texas to play for the Longhorns, Linda did everything she could to get a scholarship. On and off the field life is going pretty great for Freddie. As a star defensive safety, he saves game after game, intercepting one pass after another and earns the love and respect of his hard-as-nails coach Darrell Royal (Aaron Eckhart). But when Freddie's leg begins to give him trouble, everyone can see it. He may be able to play, but even at 90% capacity, Freddie is having trouble, more trouble than he's willing to believe is possible. A month before the Cotton Bowl, the national championship game against Notre Dame - Freddie learns that he has a tumor in his leg the size of a softball. While the Texas Longhorns may not be able to play with Freddie's legs on the field, they're going to take his heart and character to victory. 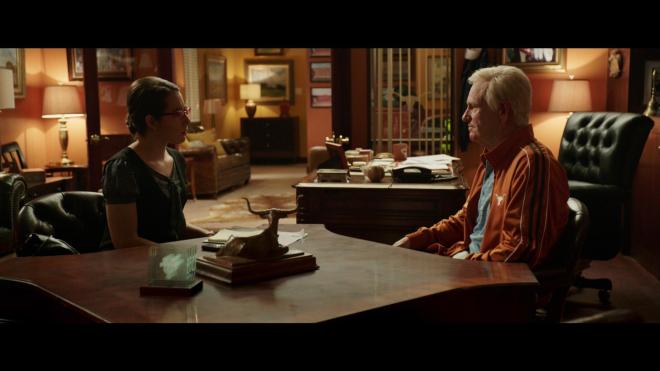 Written and directed by Angelo Pizzo the writer of 'Hoosiers' and 'Rudy,' 'My All American' doesn't stand up against those other great sports dramas. As a film unto itself, it plays too many of the same beats as 'Rudy' while tossing in a little too much 'Brian's Song' too late in the game to resonate. Part of what made movies like 'Rudy' and 'Brian's Song' work so well was that the characters were flawed individuals who stumbled, picked themselves up, aimed for their goals and were okay with the outcome because they gave it their all. 'My All American' depicts its lead character of Freddy Steinmark as an infallible superhero whose life was tragically cut short by cancer. While that is accurate to a degree, we never feel like we get to know Freddie beyond him being a nice guy who treats people nicely.

In addition to the lack of character depth, 'My All American' has a difficult time balancing its emotional core. Is it trying to promote character through accomplishment? Or is it trying to promote character through faith and prayer? Interchangeably, 'My All American' tries to tug at both heart and faith strings but doesn't do it in a way that feels genuine but instead tacked on. When the team is down or a character loses his brother in Viet Nam, it's time to pray. When the team works harder, let's watch Freddie drill himself into exhaustion as a course of inspiration. Either of these approaches could have worked on their own, but Freddie is what is known as a flawless character. He doesn't have any personal issues hanging him up or holding him back. He has nothing to overcome, so when cancer hits his leg taking him out of the game, its hard to feel anything about someone whom by all accounts was an incredible person on and off the field in real life. There are a few attempts at giving Freddie a pseudo-Gale Sayers to play off of, but Gale Sayers worked to not only make Brian Piccolo a better man and player but Brian also made Gale Sayers a better man and player in life and on the field. There isn't anyone like for Freddie to play off of. In fact, the entire cast of characters is like that. No one grows. No one changes from being a jerk into someone special. Everyone in 'My All American' already is the best versions of themselves and they stay that way.

Growing up in Ann Arbor,  Michigan, and as a son of parents who went to rival Big Ten schools, an appreciation of college sports is in my blood and bones, so when a sports drama comes out I can't help but get a little excited. I'm usually a mile ahead of the story most of the time but if the movie delivers the inspirational athletic achievement goods, I'm a happy guy. 'My All American' tries to be one of those movies with a strong emotional core, but because of the story mechanics and its script, it never earns the emotional release of the audience. You can't tell someone to feel something, you've got to guide their hand a little and let them arrive at that conclusion on their own. 'My All American' is unfortunately very clumsy and doesn't quite know when or where to lay the groundwork for an emotional release. What should have been a tear-jerker may leave you dry-eyed and unconvinced of its heartfelt intentions.

'My All American' arrives on Blu-ray thanks to Universal Home Video in a two-disc Blu-ray/DVD, and Digital HD set. Housed inside a standard two-disc Blu-ray case, a Digital HD voucher is included inside with more family film suggestions on the opposite side. The Blu-ray disc opens to other family friendly and faith-based film trailers before arriving at the main menu.

With a 2.40:1 1080p image, 'My All American' makes for a fine arrival on Blu-ray. Colors are bright and beautiful letting primaries dominate the scene while giving the green grass and the orange Texas Longhorn uniforms plenty of presence. Colors skew towards golden tones making flesh tones appear a tad yellow at times but thankfully they don't appear jaundiced or sickly but instead like they've been out in the sun a lot. Black levels are strong giving rich and inky black levels with strong shadow separation ensuring plenty of depth to the image most of the time. Now, an oddity occurs during the big final game against Arkansas where contrast gets a little too stiff. The white Longhorns helmets and jerseys can bloom from time to time and the image feels notably flatter. The rest of the film doesn't seem to have this trouble so it's a little odd that it crops up off and on during this 10-12 minute sequence. Other than that issue, the rest of the film looks splendid, well detailed allowing you to appreciate fine features with bright and beautiful colors.

With a DTS-HD MA 5.1 audio track, 'My All American' proves to give a resonate audio mix on the football field and off. Most of this film's mix are at its strongest when football is either being practiced or played. The crushing sounds of tackles, the roars of cheering fans, and the grunts from players as they're hit come from all sides ensuring that the surround channels are engaged and kept working. Conversational moments are a little softer but there is plenty of atmosphere and background elements to give the track a sense of space. Dialogue is crystal clear holding to the front/center channels while the score helps fill the quieter moments without dominating any given scene. As much of the track keeps to the midranges, levels are spot on and the track is free of any detrimental anomalies.

A Look Inside 'My All American' (HD 2:39) This is perhaps the briefest EPK style extra feature I've ever seen. Barely even scratches the surface of the making of the film.

I love a good sports drama - there's just something about them that perks me up, gets me hooked and makes me sit on the edge of my seat. If they're also a good character drama where you start to feel a little lump in your throat and some liquid discharge from your eyeballs, all the better. 'My All American' sadly just didn't hook me the way that I hoped. It works too hard to tell me what I should be feeling in any given scene rather than genuinely earning a real emotional response. Universal Home Video has brought the film to Blu-ray in fine form with a strong audio/visual presentation. Extras are extremely skimpy and don't provide a good look at the making of the film or the character that the film was based off. Overall, I'll still say that this Blu-ray of 'My All American' is worth a look.

Sale Price 19.99
Buy Now
3rd Party 17.99
In Stock.
See what people are saying about this story or others
See Comments in Forum
Previous Next
Pre-Orders
Tomorrow's latest releases