The Magicians: Season One

Based upon Lev Grossman's best-selling books, The Magicians stars Jason Ralph (A Most Violent Year, Aquarius) as Quentin Coldwater, a brilliant grad student who enrolls in Brakebills College for Magical Pedagogy, a secret upstate New York university specializing in magic. He and his 20-something friends soon discover that the magical fantasy world they read about as children is all too real— and poses grave danger to humanity. Stella Maeve (Chicago P.D.), Hale Appleman (Teeth), Arjun Gupta (Nurse Jackie) and Summer Bishil (Towelhead, Lucky 7) also star in this one hour drama.

"There are no answers because we have no idea what is going to happen next."

It's fun when you discover a new TV series that sucks you in and doesn't let go. It's also a bit of a burden, because you inevitably must clear a large swath of your schedule in order to indulge the binge watch. The latest show to earn that slot on my busy schedule is Syfy's 'The Magicians.' While it's opening is a bit clunky, a little tough to make sense of what is going on and who the major players are - the series quickly finds it's groove and charts an impressive path towards telling a serious story about magic and the responsibility that comes with power - but still has a sense of humor and heart.

All his life Quentin Coldwater (Jason Ralph) has felt like he doesn't belong to the world. Since he has difficulty making friends or connecting with people, he retreats into a series of fantasy novels revolving around the mythical world of Fillory. Even as he holds the books in his hands repeatedly reading and rereading the stories, he knows deep down in his gut that it couldn't possibly be real - but it feels real. It feels like a tangible world to him, it feels like a place he could thrive. After checking himself into a mental health facility to help him deal with this feeling of disconnect, Quentin discovers his true path.

Along with his friend Julia (Stella Maeve), Quentin believes he's interviewing for a prestigious graduate school program, but what he learns is that all of those feelings about magic are actually real! At the esteemed magic school of Brakebills, Quentin has finally found the place where he feels like he belongs - even though he doesn't believe he knows any magic. The staff at Brakebills lead by Dean Fogg (Rick Worthy) quickly help Quentin discover abilities he never knew he had. For the first time he makes true friends with other magicians like the gregarious Eliot (Hale Appleman) and his cohort Margo (Summer Bishil), the guarded but talented Alice (Olivia Taylor Dudley) and the brash Penny (Arjun Gupta). But magic has a dark and dangerous side that the story books failed to mention. 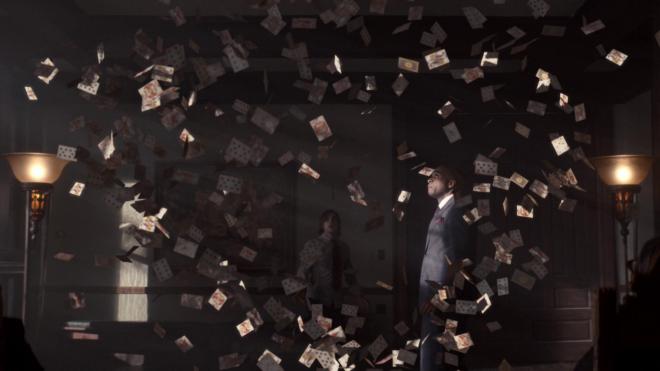 As Julia failed to make it into Brakebills, she becomes addicted to magic, seeking out anyone willing to teach her anything new and exciting, shattering her friendship with Quentin. As the two former friends travel their own educational paths, the world of magic comes crashing down when a creature known only as The Beast, a being who can travel between worlds begins killing magicians and threatening the existence of Brakebills, the staff, and poses a threat to the lives of the students - especially Quentin.

If 'The Magicians' sounds at all familiar, in particular, a little series of books revolving around a little boy by the name of Potter, you wouldn't be far off the mark. It isn't a stretch in any way to suggest that this series developed from the Lev Grossman stories is very similar to the 'Harry Potter' books and movies. That said, this material thankfully does a great job of taking those similarities and running in some pretty interesting, mature, and often times dark territory. The themes of addiction and the responsibility that comes with power is constantly examined and reexamined from multiple angles. Is Quinten any less of a magic addict than Julia because he made it into a legit school and she has to slum around to learn? If you have the ability to save an ailing family member, do you have the right to use that power when there are others who could use that help as well? 'The Magicians' easily could have been some dim surface level material but it conjures up some pretty deep and thought provoking material and manages to stand on its own feet.

Where 'The Magicians' loses a point on the scoreboard is because of the rather clunky first couple episodes. Stuff just sort of happens, characters are introduced, and more things happen without much flow or context for why they're happening. A lot of that is understandable so the story can get moving and the series can cover more ground, but characters who suddenly become friends without any reason or chemistry can be a bit jarring. It honestly took me two full episodes for me to find my pace with the show. By the time the third episode was done, I was all in. I was still a little confused as to what the heck was going on and why I was seeing what I was seeing at any given moment, but I could start to see the pattern emerging. 'The Magicians' wisely doesn't give away the whole show in a single episode nor does it unnecessarily drag things out, it's merely sprinkling around some story breadcrumbs for the audience to follow and it doesn't take long for things to pay off. I feel like if those opening episodes had been paced a little better and didn't cram in so much so quickly, that opening flow would have worked a lot better. That said, in the context of this first season as a whole, it's a minor quibble because once things get moving it doesn't slow down and is pretty damn entertaining stuff.

What I particularly loved about this show was how dark and brooding and mature a lot of the material was, but that it also took the time to be lighthearted and revel in a world of magic. There's a lot of fun to be had watching these characters cast their spells (sans wands) and witness the sometimes hilarious consequences. The show also doesn't skirt the responsibility these characters face with their powers. Various subplots weave themselves in and out of the show and test the characters abilities but also their emotions and their moral compasses. Just when you think the show is going to be all silly fun and games it whips itself around and grounds things in a relatable reality - one that also happens to include a villain whose head is made up of a swarm of moths! It's fun, exciting, scary, and hilarious all at the same time. While those first couple episodes are a bit sticky, 'The Magicians' finds its pace and delivers some great entertainment value. I'm all in for season two and I hope it starts up sooner rather than later!

'The Magicians' arrive on Blu-ray courtesy of Universal Home Video. The series is pressed onto three BD50 discs. Disc one opens with trailers for other Universal produced television series and films before arriving at a static image main menu. Discs two and three load directly to their respective main menus with traditional navigation options. If you stop in the middle of an episode your player should give you the option of resuming the episode when the disc loads up. Bonus features are spread out over all three discs. The discs come housed in a three-disc Blu-ray case with lenticular slip cover, each disc is given its own tray to occupy. Also included in this set is a Digital HD voucher for the entire first season.

With a 1.78:1 1080p transfer, each episode of 'The Magicians' makes a fairly pleasing appearance on Blu-ray. While it may not appear all that remarkable given the nature of the show's magical tendencies, it holds its own against other modern shows. Details are strong - there is some softness from time to time but nothing too glaring to worry about. Colors are well saturated and offer up some thematic separation between the warm and rich world of Brakebills and the colder blue harsh world of "real life." Black levels and shadows are nicely saturated and present allowing for some real three-dimensional presence with the image. The only real issue of note with this transfer is some instances of video noise that can crop up from time to time. They're not very scene specific as noise will appear one moment and be gone the next, but it's there. Still, this is a very good looking show and this transfer does it justice.

Each episode of 'The Magicians' arrives with a strong and prominent English DTS-HD MA 5.1 track with optional English SDH subtitles. Dialogue is clearly heard throughout and never has to compete with the series' score by Will Bates or the sound effects. For the most part, these are fairly front loaded mixes with the music picking up a lot of the surround channel work load. Atmospherics and sound effects keep their presence to a minimum until they're needed. When they kick in during a big dramatic sequence or a spell casting their presence really kicks the track into gear. it can be a bit of a surprising effect to have the surrounds rush in around you like that, but for this show it actually works well. Levels were pitch perfect and when things got exciting I never felt the need to fiddle with the volume. Imaging, as I mentioned with the surround effects, can be a bit subdued, but, when the action pops in there is plenty of channel movement. All around great tracks for this show.

Deleted Scenes: (HD 2:08) Comprised of three scenes, there really isn't too much missing here, nothing appears to have any real amount of character weight.

Deleted Scenes: (HD 5:01) Again, some somewhat entertaining scenes but no material that feels "missing" or anything that feels like it would have added to the show.

Deleted Scenes: (HD 6:18) A couple of these scenes actually help round out some of the later plot devices so it's pretty cool, but again, they don't feel like they're "missing" from the primary show.

The World of 'The Magicians': (HD 13:51) This is an unfortunately short EPK style bonus feature with the usual cast and crew stories about working on the show and it's transition from page to screen. Some great material here and it would have been awesome if it was longer and separated out into more detail about the various production aspects.

Every year there are more and more television shows hitting TV screens worthy of sucking up all of your time - on top of all the other shows you're desperately trying to catch up on. Syfy's 'The Magicians' is another solid freshman outing. It has a clunky start, but give it through episode three to grab you. If you can do that I bet you'll get sucked into the show, it's characters, and the intricate magical world it brings to life. Universal has done a great job bringing 'The Magicians' to Blu-ray as each episode offers a rock solid A/V presentation. Sadly the extra features are a bit skimpy and could be better - but they do offer up some worthwhile material. At the end of the day, I'm calling this first season of 'The Magicians' recommended. It's fun if you give yourself to it.

Sale Price 3.2
Buy Now
3rd Party 3.2
In Stock.
See what people are saying about this story or others
See Comments in Forum
Previous Next
Pre-Orders
Tomorrow's latest releases