The Member of the Wedding

Uber-producer Stanley Kramer (Judgment at Nuremberg) and sterling director Fred Zinnemann (A Man for All Seasons) bring us The Member of the Wedding (1952), a sensitive film version of Carson McCullers’ Broadway play, adapted from her own novel. Julie Harris—who created the role of yearning adolescent tomboy, Frankie, on the stage—is joined here by fellow original cast members Ethel Waters, as the mother figure Berenice, and Brandon de Wilde, as a mischievous young cousin, John Henry. Cinematography is by the great Hal Mohr (Rancho Notorious) and the extraordinary score – available on this Twilight Time release as an isolated track – is by legendary composer Alex North.

Adolescence is the absolute pits, especially if you're the youngest sibling in the room. You're going through some of the most difficult life changes imaginable and meanwhile the entire world moves on without you. On top of that, everyone looks at you like you're the one who is in the wrong as if they themselves forgot the tumultuous processes of growing up. Fred Zinnemann's 1952 adaptation of Carson McCullers novel and stage play 'The Member of the Wedding,' starring Julie Harris, Ethel Waters, and Brandon De Wilde is a beautiful, painful, and humorous look at that precarious age where you're about to enter adulthood, but aren't ready for the inevitable changes.

Young tomboy Frankie Addams (Julie Harris) is having a harder and harder time finding her place in the world around her. Suffering through the intense muggy Georgia heat, this small town girl once had a teeming band of friends to follow. Today, she's an outsider who isn't invited to play or go to the overnight parties. The only real friend she has left is her younger cousin John Henry (Brandon De Wilde). Ever since her mother passed away, she's been in the care of her busy and absent father (William Hansen) and the family cook Berenice (Ethel Waters). As the world she once knew and loved begins to move on without her, all Frankie wants is to hold onto some sense of normalcy.

While she rages against these life changes, Frankie learns that her older brother Jarvis (Arthur Franz) is coming home on leave long enough to marry his girlfriend Janice (Nancy Gates). Frankie sees this as the perfect opportunity for her life to come back together again. Of course, Jarvis and Janice want young Frankie to come live with them? After all, they're a family, this has to be what they've always intended for her and they just happened to forget to let her in on the plan. As Frankie sets about deluding herself about the state of things and her small town life, she is ultimately setting herself up for one of life's most bitter lessons - the world doesn't revolve around you - and Frankie is ill-prepared to learn such a harsh lesson. 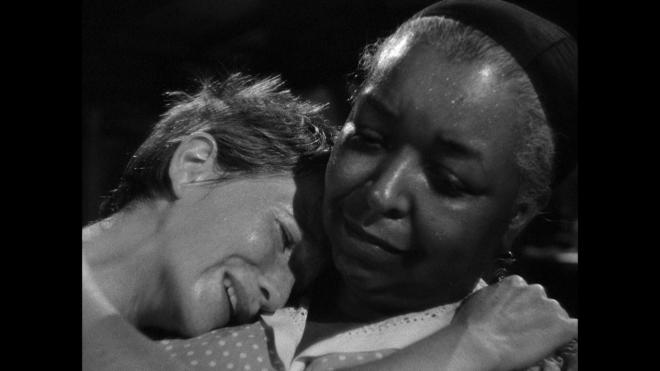 Set within and around only a handful of locations, 'The Member of the Wedding' absolutely feels like a play brought to real life. While most certainly shot on several sound stages and in controlled conditions with manufactured sets, there is an overwhelming authenticity to this film. This small town feels real as if you've seen it somewhere before. While the story and the film itself may draw some similar comparisons to Harper Lee's 'To Kill A Mocking Bird,' the comparisons about two young tomboy adolescent girls in a small southern town stop there. Where 'To Kill A Mocking Bird' is largely about a young girl growing into a larger world she doesn't understand, 'The Member of the Wedding' focuses on the personal turmoils of adolescence. The life lessons are about that internal struggle of finding your place in a world that seems to be constantly rejecting you.

I wasn't expecting to get so caught up in Frankie's plight within 'The Member of the Wedding.' Julie Harris does a fantastic job playing the brash and bullheaded young girl and is what make her such a relatable character. Like her, I was the younger child of the family. It took me a long time to know my place as friends moved on and a sibling went off to college and only sporadically kept in touch or visited home. One moment you've got an idea of what your family is and who these people are and how you all relate, and the next moment everything is split apart. I fully understood Frankie's need to hold onto a dream because I had similar ideas. While I certainly didn't want to go off and live with my sister and her new husband right after they got married, part of me lamented the permanent change in the family dynamic. Nothing was going to be the same again. That's the beautiful life lesson 'The member of the Wedding' puts forth. It takes time to learn that you can't fight the change and have to adapt to the changes in the best ways possible, just like Frankie has to learn through the course of this film.

As I mentioned, Julie Harris is fantastic as Frankie. Even if she was about 15 years too old to be playing a 12-year-old girl, Harris makes Frankie a frustrating, brash, but ultimately relatable character. It helps that she had over 500 stage performances of the role to prepare for this film! As a broadway adaptation, it was a wise decision to bring back the principal actors. Ethel Waters' Berenice is a wonderful surrogate mother type character. She's done her best to raise Frankie right as the girls father is rarely home. You see a motherly concern for the young girl every time Berenice tries to calm Frankie and press into her some life lesson. Rounding out this great cast is Brandon De Wilde as the young John Henry. He's a small character but you can see so much of a young Frankie in him he's her mirror. He doesn't understand Frankie's needs or issues with change, for him, the world is as it always was and you can see that someday, like everyone else who grows up, he will experience similar changes as Frankie.

While I will say that some front end conversations of the film can sag as they feel like they're covering the same ground over and over again, the movie as a whole is a beautiful effort. Fred Zinnemann is in perfect form delivering a tight and relatable character drama. His direction never feels forced, by letting the camera roll for long takes, we see the actors deliver some emotional performances. While it's hard to watch a character go through so much personal turmoil, 'The Member of the Wedding' has a lot of heart and an honesty to it. This never feels like a movie designed to win awards, rather one that deserves them because everyone in it is delivering some of their best work.

'The Member of the Wedding' arrives on Blu-ray thanks to Twilight Time and is limited to a run of 3,000 copies. Pressed onto a Region Free BD50 disc, the disc comes housed in a clear standard Blu-ray case with a booklet containing photos and an essay by Julie Kirgo. The disc opens directly to a static image main menu featuring traditional navigation options.

With only some very slight speckling, a very small inconsequential scratch or two, and a couple moments of softness (which look more like focus issues), 'The Member of the Wedding' arrives on Blu-ray with a near-flawless 1.33:1 1080p transfer. For a deep catalog title, this is a beautiful looking film. Film grain has been retained allowing you to see and appreciate everything on screen. Facial features and costuming are on full display as is the intricate production design work. Even though I'm sure this film was shot in an air-conditioned room, it looks and feels like a hot and sticky summer. The image also boasts an impressively strong grey scale with rich inky black levels and plenty of shadow separation to give the image an appreciable sense of three-dimensional depth. It's a wonderful presentation and is sure to be the best the film has looked in ages.

With an English DTS-HD MA 1.0 track, 'The Member of the Wedding' sounds fantastic. Free of any age-related issues like hiss or pop, this conversation-driven film sounds fantastic. Every line of dialogue is easy to hear without any competition from background sound effects or the film's amazing Alex North Score. Even as a mono track, the audio displays a notable sense of dimension and slight imaging as the characters move about any given space. I'm actually glad that they resisted the tendency to process this mono track as a doubled up stereo mix, it sounds authentic this way and in keeping with the quiet nature of the film. Levels are just right so once you have them set the way you like, you shouldn't have any need to alter them.

Karen Kramer Introduction: (HD 1:36) This is a brief, but a very good intro to the film and why Stanley Kramer bought the play and made sure to bring back the original cast.

Audio Commentary: Film Historians Derek Botelho and David Del Valle with Singer and Songwriter Suzanne Vega provide a very interesting commentary here. They clearly have an appreciation for this film but also the original novel and stage play and provide some interesting tidbits throughout their commentary.

Audio Commentary: Carson McCullers biographer Virginia Spencer Carr provides a very interesting commentary track for this film as it's coming from the focus of the original author and playwright. There is some interesting anecdotal material here as well making this commentary a nice companion to the previous one.

The World of Carson McCullers: (HD 15:53) With some archive materials and old interviews, this is a pretty interesting, if maybe a bit too brief look at the life of the author and playwright. I feel like this could have gone on longer as a couple segments feel short. Still very good.

The Journey From Stage to Film: (HD 10:11) Actor Kevin Spacey and Stanley Kramer's widow Karen Kramer provide some very interesting material as they look at how this film came to be. Another featurette that just feels too short, I could have listened to these two talk for a lot longer.

It's a great day when you discover a film you've never heard of that pays off in all of the best ways. 'The Member of the Wedding' is a heartfelt drama about growing up. Whether you're a man or woman, fully grown or still young, this film is relatable featuring an impressive cast. Twilight Time delivers a fantastic Blu-ray release of this film with a beautiful A/V presentation and hours of extra features. Whether or not you've seen or even heard of this film, it's one to sit down and watch and give your fullest attention. Highly recommended.