A tall, darkly twisted drink of unknown origin with just a splash of seductively bitter, sinfully carnal savagery, 'Romeo Is Bleeding' is a product of some other warped and degenerate alternate dimension. It comes to cinephiles as if from a parallel universe similar to our own where the popularity of the mystery crime dramas affectionately known as film noir didn't simply come to an end in the late 1950s. But it continued to thrive and evolved into damnable depictions of wretchedly debased humans committing sordid acts of criminality, infidelity, depraved perversions and all manner of double-crossing wickedness. From Hungarian-born director Peter Medak ('The Changeling,' 'The Krays') and screenwriter Hilary Henkin ('Wag the Dog,' 'Road House'), the film exists as if from a dream of the cinematographic noir style with several nightmarish qualities. It thinks fondly on the subgenre with an air of reverence, equipped with immediately familiar tropes and desiring to play by conventional rules. But on the other hand, it disregards all familiarity and defies order, while giving audiences a knowingly sinister, seductive smile.

If it seems as though I'm struggling to properly define this wonderfully entertaining 1993 cult favorite, it's because it is a difficult film to describe without revealing the entire plot. That dreamlike quality comes from events and plot points that just seem to happen and pop on screen with little leading up to that particular situation. Out of nowhere, a cop suddenly confides in fellow homicide detective Jack Grimaldi (an enigmatic Gary Oldman) that his gun was stolen by the villainous Russian mob assassin Mona Demarkov (the stunningly gorgeous Lena Olin). The entire sequence, frankly, comes out of left field, but it weirdly feels like the natural course of events that began with Demarkov's massacre of a room full of FBI agents and an informant under witness protection. The whole thing creates an air of impulsive hurriedness that reminds viewers of an earlier scene where Demarkov's effectively seductive wares snared Jack into a similar trap while also showing viewers Jack's world rapidly spiraling out of control and crumbling right before our eyes. And much of the film feels like this strange collection of a fragmented hallucination from a mind exaggerating the noir subgenre as demented melodramas of sex and violence. 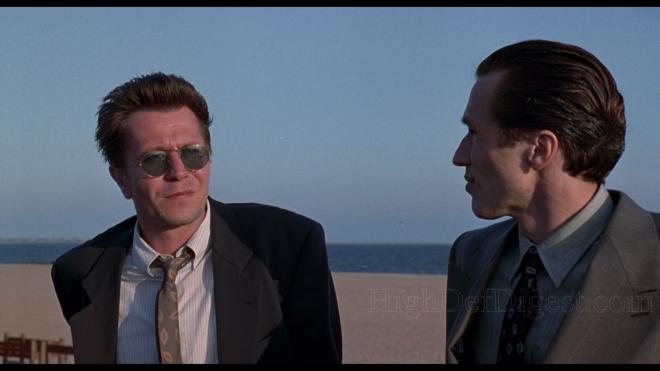 Before becoming a recognizable screen name but at around the same time American audiences were finally starting to appreciate his talents, the brilliantly gifted and incredibly versatile Gary Oldman gave what I would rank as one of the very best performances of his career in this wickedly delightful crime drama. With a pitch-perfect New York accent, the actor is the archetypal detective, but he's also unlike any gumshoe we've ever experienced, providing a voiceover narration that only delivers the requisite exposition but moreover continuously breaks the fourth wall by talking directly to the audience and commenting on the dire incidents leading to his downfall. Despite being our hero, the corrupt NYPD detective comes with a laundry list of despicable attributes, keeping secrets from his suspicious but loyal wife Natalie (Annabella Sciorra) while somehow despoiling his gullible mistress Sheri (Juliette Lewis). And yet, in the capable hands of Oldman, Jack is a tormented soul wrestling with his desire to be a good, honorable man but easily tempted by the money he earns as a mob snitch for Roy Scheider, thousands of dollars he tellingly hides between his idyllic backyard and an imposing view of a graveyard.

And like a good noir picture, Oldman's Jack meets his perfect foil in Olin's Mona, a fabulously amplified version of the familiar femme fatale who's not only our hero's equal but also his shockingly deadly superior. As a female mob assassin, the Swedish-born actress is a phenomenal, larger-than-life presence that amazingly makes the psychopathic killer into a fascinating seductress luring her would-be captivators in tantalizing outfits and forthright advances. With a mischievous smile that gives away her intentions and should immediately make men wary, she commands the screen in the same manner Barbara Stanwyck, Jane Greer, Rita Hayworth and Lizabeth Scott once did. Only, Olin's fatally toxic guiles includes a little more skin than her predecessors as a means of accomplishing her goals, enticing her victims like the true black widow spider she is. In 'Romeo Is Bleeding,' a title that works just as figuratively as it does literally, Olin's performance is a large part of the film's endurance and cult status, serving as that wicked, taboo temptation invading the dreams of cinephiles much the same way she further bankrupts our hero.

Peter Medak's 'Romeo Is Bleeding' comes to Blu-ray as a Limited Edition release courtesy of Twilight Time. The Region Free, BD50 disc is housed in the standard blue keepcase accompanied by an eight-page booklet with a thoughtful essay written by screenwriter Julie Kirgo. At startup, the disc goes straight to a static menu with the usual options.

Romeo bleeds all over Blu-ray with a strong but less than gratifying 1080p/AVC MPEG-4 encode that shows an improvement over its DVD counterpart but doesn't quite match other high-def releases of the same period. The source used has aged decently well and could greatly benefit from a remaster of the original elements, showing that sort of yellowish hue that coats a film over the years.

As is, however, specks of dirt occasionally make an appearance and there are several instances of poor resolution and mild, negligible posterization mixed with scenes that are noticeably softer and blurrier than others. On the whole, the transfer is well defined with plenty of visible background information and good details in the clothing, the New York streets and the surrounding foliage. Although facial complexions can be revealing, skin tones are often sickly and pasty. Contrast falls slightly on the lower end of the grayscale with highlights that tend to bloom, but overall, it remains balanced and comfortably bright.

On the positive side, blacks are generally true and accurate with strong shadows delineation. Colors benefit nicely from the jump to HD, looking decently bright but not really the sort to make it stand out. The video is also awash with a thin, fine layer of natural grain, providing the 1.85:1 image with an attractive film-like quality.

On the audio side of things, the neo-noir crime drama violates the rules with an excellent DTS-HD Master Audio stereo soundtrack that hits the door running from it opening moments and terrifically doesn't let up until the end.

Right from the start, the entire soundstage swells with the jazz-infused pulse and saxophone rhythms of Mark Isham, reaching the higher frequencies without issue or the slightest hint of distortion. Imaging is engagingly broad with distinct acoustical details between the various notes and superb accuracy. The lossless mix displays outstanding channel separation and balance, convincingly delivering off-screen effects of the busy city streets and some of the local wildlife. Occasionally, random noises that don't appear related to on-screen action echo to the other channels, and they tend to distract somewhat.

Still, vocals remain precise and accurate in the center, exhibiting clean intonation and pitch in Oldman's performance and in every alluringly suave line spoken by Olin. Most impressive is a tight and highly responsive low-end that delivers some mild impact to the action but better still, provides a palpable weight to the score that feels credible.

Although very much in the tradition of classic film noir, 'Romeo Is Bleeding' is a perverse, degenerate, and nightmarish version of that heavily stylized subgenre. But with outstanding performances by Gary Oldman and Lena Olin, the cult crime drama continues to mesmerize and entertain. The Blu-ray arrives with a strong picture quality but even better audio presentation. Although lacking supplements, the bare-bones package makes an enticing purchase for fans of the film as well as of the actors.