It's a tough day when you spend most of the time watching a movie questioning its motives. While the theme or the point of the film may not be in question, the reason why an audience should see a film could remain in question. This is especially true if the film is a particularly lurid subject matter with suitably adult-related content. Are we meant to glean some sort of a valuable life lesson, or are were here merely for the titillation? Gianluigi Calerone's 1974 film 'Appassionata' starring Gabriele Ferzetti as a man who begins a sexual affair with his daughter's best friend attempts to be something in the vein of 'Lolita' but becomes too distracted by showcasing explicit sexual content and sacrifices character development and tries to become a cliche Eurocult sexploitation film.

Emilio Rutelli (Gabriele Ferzetti) is a successful dentist with a thriving practice. His beautiful wife Elisa (Valentina Cortese) was once a great concert pianist when she was in her prime. Today she suffers from extreme dementia and spends most of her days in her ornate bedroom reliving her glory days unaware the world around her has moved on. Their only daughter Eugenia (Ornella Muti) is blossoming into a young woman without someone to guide her and help her navigate these new emotions. At her side is her best friend Nicola (Eleonora Giorgi) who has a teenage crush on Eugenia's father.

When Nicola acts on her fantasies and seduces Emilio in his office, Emilio begins his own midlife crisis. As a middle-aged man with a mentally ill wife, is it wrong to seek out the willing affections of such a young girl? While Emilio slyly attempts to create more opportunities to be with Nicola, Nicola begins to assume a motherly role when Eugenia begins to act out her own sexual frustrations. Things turn for the worst when the only way Eugenia can gain the attention and affections of her father is by attempting to form an incestuous relationship with him. 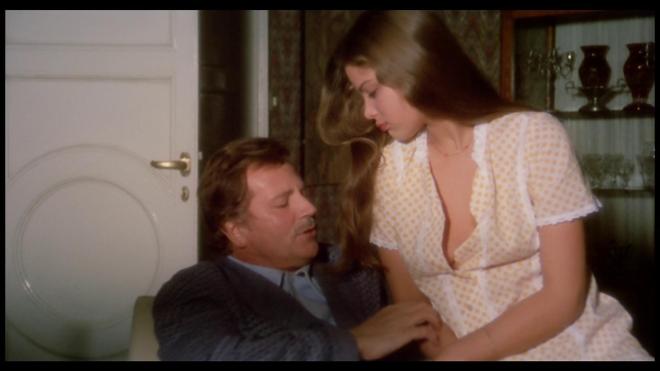 If you were to read a breakdown of a film such as 'Appassionata,' you would naturally expect to be treated to an interesting character-driven drama, or a cheap sexploitation movie. The plot could easily swing both ways and because of that, the final film isn't satisfying in either fashion. It's too sexually explicit to be dramatically interesting as the film lumbers from one scenario to the next, including an incredibly awkward and baffling dream sequence. 'Appassionata' also suffers from playing things so straight that it can't become a bawdy, tawdry piece of Eurocult sexploitation entertainment. It tries to have things both ways and it's just not a clever enough film to do that. Perhaps if it had been made twenty years later by someone like Paul Verhoeven, this story could have worked as a feature film. But it wasn't. In its current state, 'Appassionata' is a frustratingly dull affair that leaves you wondering where the film is going and why it chose to go there.

The cast of the film is not to blame for the outcome of the film. Gabriele Ferzetti as Emilio is certainly an interesting watch. He does an impressive job to imply some sense of inner conflict over his actions as a man who is uncomfortable and unprepared to be desired sexually. Ornella Muti as Eugenia showcases fantastic range as a young woman trying struggling to gain the attention and affections of a mentally-ill mother and an increasingly distant father until she reaches the breaking point and must act out sexually. Then we have Eleonora Giorgi as Nicola who at first seems to be playing a nubile teen fantasy character but then the film switches things up and she ends up becoming one of the only mature characters in the film. Last but not least, we come to the impressive work of Valentina Cortese as Elisa. Cortese's transitions from lucid sanity to clouded dementia are effortless. As the film progresses you feel her understanding of the situation slipping away from her and empathize with her downfall because she really is the only innocent character in the entire film.

At the end of the day, 'Appassionata' tries to do a lot with interesting material but because of its several shortcomings, it doesn't manage to become much of anything. It's a film that on a dramatic level you feel you should like as a character study, but the dramatics are so thinly drawn that you can't help but feel its a bit too sleazy for its own good. On the other hand, the sexuality it exudes, while graphic, is almost too tasteful to be considered exploitive. The film tries to be both things all at the same time and by the time it reaches its end, it hasn't fully become either and is instead a missed opportunity. Had the film focused more attention on characters and building some sense of thematic direction, it could have been a hell of a dramatic work. If it had gone full tilt with its exploitive side, the film could have become a cult hit. 'Appassionata' is neither of these things and may strain the will of its audience.

'Appassionata' arrives on Blu-ray courtesy of Twilight Time and is limited to 3000 copies. Pressed on a Region Free BD50 disc, the disc is housed in a standard clear Blu-ray case. It comes with a booklet containing an essay by Julie Kirgo with stills from the film. The disc opens directly to a still image main menu with traditional navigation options.

'Appassionata' arrives on Blu-ray with a slightly window-boxed 1.85:1 1080p transfer. This is a film whose image quality is tough to grade because it straddles the lines of what most would expect of a strong HD transfer and what is ultimately unintended by the filmmaker. This is an incredibly soft looking film. Aside from some of the closeup shots of various characters, the film maintains a dreamlike haziness throughout. There is some fine film grain on display, but it's only intermittently apparent leading me to wonder if some slight DNR was applied to amplify the dreamlike quality of some scenes, in particular, the dream sequence where everything tends to have an overly smeary appearance. Colors are bright and vibrant with great primary pop and presence. Flesh tones appear normal. Black levels are a tad iffy, again because of the soft nature of the photography they never quite approach deep inky blacks. This could also be in part to some contrast boosting here and there as some whites tend to bloom more than they should. While I wouldn't call this a great image, there is a sense of purpose to its design so I'm giving it a middling grade. It's not terrible, but it may not be what most folks out there are expecting.

'Appassionata' arrives with two language choices to choose from. An Italian DTS-HD MA 2.0 with English Subtitles or an English Dubbed DTS-HD MA 2.0 track. Because this is an Italian production and no native dialogue audio was recorded on set, both tracks have a bit of an inauthentic "canned" quality to them. I will suggest that you watch the film in the native Italian because it just sounds a bit more natural. The spread of the dialogue, sound effects, and music feels better balanced and authentic than the English dubbing. As far as an English dubbed track goes, it's not bad, it works, but the Italian is a bit better. Both tracks are free of any age-related anomalies or hiss or pop. Either track you choose will get the job done.

'Appassionata' tries to have it all but ends up with only pieces of conflicting genres. It's too dramatic to be a sexploitation flick and it's too tawdry to be a film with genuine dramatic aspirations. It isn't a terrible film, as there are some incredible performances by its primary cast, but there's only so much that can be done with great performances. At some point, the story has to take over and it never really does in a way that fits. Twilight Time has brought the film to Blu-ray with a serviceable A/V presentation. The only extra feature is a very good isolated score track. Given Twilight Time's premium price point, a blind buy is not recommended.