Overview - Mel Brooks scores a bull's-eye with this hysterical reinvention of the Robin Hood fable! In days of olde, when men were men, men wore tights. And none wore tights mightier - or tighter - than Robin Hood! Aided by his band of merry men, Robin of Loxley wrested power from the evil Prince John, brought humiliation upon the despicable Sheriff of Rottingham and found the key to the fair Maid Marian's heart - and her chastity belt. Starring Carey Elwes as the dashing defender of the downtrodden, the hilarious supporting cast includes Tracey Ullman as the sorceress Latrine, Richard Lewis as Prince John, Dom DeLuise as mob boss Don Giovanni and Mel Brooks himself as Rabbi Tuckman.
OVERALL
Recommended

Of all the Mel Brooks films to connect to in the budding years of my film obsession, 'Robin Hood: Men in Tights' may have been the perfect fit for me. Released when I was in the 5th grade, the film became a mainstay any time I was around a television, as I could likely find it playing on some channel every week, back in the day when having less than 100 channels was normal.

While the Disney-animated iteration of the character had been my favorite up to the life-changing moment when I discovered 'Men in Tights,' I now think back to that classic and laugh, as all I can picture are furries (you know, people who dress in ridiculous animal costumes and yiff), rather than the tale being told in such a fun and family-friendly manner. Did Brooks warp my fragile little mind, or did I finally grow up and come to appreciate live-action versions of stories over the hand drawn versions inundated upon me in my youth?

It doesn't matter, really, as my favorite Robin Hood is a send off, a parody, in classic Brooks fashion. After coming home to Britain from the Crusades, Robin of Loxley (Cary Elwes in a tailor-made role) has found his beloved land changed, his family dead, and the ruling class a twisted version of its former self. Prince John (Richard Lewis) is taxing the land into poverty, while his enforcer, the evil Sheriff of Rottingham (Roger Rees), has a no-nonsense, no-survivors mentality for any who stray from the path. Forming allegiances with the common men of the land, including Ahchoo (a young Dave Chappelle), Little John (Eric Allan Kramer), Will Scarlet O'Hara (Matthew Porretta), Friar Tuck (Brooks), and family (blind) servant Blinkin (Mark Blankfield), Robin sets out to put an end to the injustice, right the wrongs, end the tyranny, restore the throne, protect the forest, introduce folk dancing, and win the heart of the fair Maid Marian (Amy Yasbeck).

Since I only became a fan of 'The Princess Bride' in my adult years, my adoration for Elwes centered on this role, and this role alone. I found it silly to want to be anything other than this character. He's cool, confident, sarcastic, a great singer, an even better archer and sword fighter, he gets the girl, saves the day, and is a fantastic mix of cockiness and hilarity. Quicker with a battle of the wits than he is a battle of blades (though he's quite fast at those, as well), this Robin Hood may be a man of the people, but he isn't the fearless leader with a heart of gold, stealing from the rich and giving to the poor. He's a smarmy Generation X'er in the 12th century, much like those played out fish-out-of-water tales ('A ________ in King Arthur's Court,' where the blank can be anything you want it to be).

Robin is not the only skewed character here. The evil sheriff is more dyslexic than he is cruel, while his sniveling leader has a moving mole much akin to Igor's hump in 'Young Frankenstein' (a less than hidden self reference). Robin's band of merry men is as inept as they get, with each character possessing glaring deficiencies that are only compensated due to the fact that everyone else around them is even more ridiculous. The Friar Tuck may be the most twisted of all men, though, as Brooks brings to life the once innocent man, who now makes a living as a mohel, wondering about the sexuality of Robin's merry men before offering to nip their tips.

Yasbeck, the widow of the under-appreciated John Ritter, is at the height of her beauty here, with her chastity belt adding to her sensual allure. Tracy Ullman (as Latrine, the resident witch/cook) also is at her physical best, in her limited appearance. The roll call of stars doesn't end with the main cast, as Dom DeLuise, Dick Van Patten, Patrick Stewart, and Isaac Hayes all provide laughs in cameos as random as the film itself.

As much as I love this film (and I do, I really do), it suffers a bit already due to some issues with its age. Jokes involving pump sneakers are about as lost as any joke can be, while imitation 'Home Alone' screaming is beyond cliche, Arsenio Hall-esque woof-woof-woofing is as forgotten as Arsenio Hall himself, and the wave (and the chop) chants in crowds just never were funny, not when the film was first released, and definitely not now.

Still, it's hard to call any film with the Men in Tights song and dance number (try telling me that scene is nothing short of hilarious, I dare you) anything but brilliant. Brooks isn't at the top of his game, but he's damn close with the fantastic bridge staff fight, transition to musical midway through the film (with two song numbers packing the absurd laughs) only to get "serious" again, and his take on the "greatest treasure in all the land." Past Brooks film gags are kindly nudged in this classic parody film, back when the genre was more than just throwing together scenes with no rhyme or reason and calling it a day.

'Robin Hood: Men in Tights' was initially available exclusively in 'The Mel Brooks Collection' box set, but has been given a standalone release for those not interested in buying all nine movies. The disc is identical in every way, down to the numbers on the barcodes on the underside of the disc, just like 'High Anxiety' and 'History of the World: Part I.' 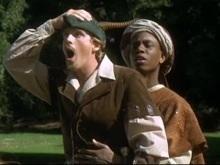 'Men in Tights' has an 1080p AVC MPEG-4 transfer at the 1.85:1 window that does the film great justice. Skin tones are natural, even in the opening shots that sport super bright flames in the immediate background. Grain is intact, though it occasionally fluctuates in darker shots. It does not appear scrubbed, or frozen, though some dirt and scratches can permeate shots annoyingly.

Black levels are appropriate (though not too deep), with satisfying delineation that keeps depth and detail in shadows where they belong. Edges are natural, while banding and artifacting are non-issues. Detail levels are improved, though some shots come off blurry, especially with the sometimes shaky camera bouncing things up. Backgrounds are always a mess, though stray hairs pop, even at a distance, and are quite impressive (one of my favorite bits of the transfer, to be honest), while a few scenes show clear dander floating through the room. Brightness levels can fluctuate mid-scene, which is quite frustrating.

The picture isn't very deep, clothing fabric jumps between clear and muddled, and greens in grass come through a bit nuclear in brightness. Still, since I was expecting worse (from all my viewings in the past lowering my expectations), I was still pleasantly surprised here. This transfer is passable, for a film that will never look all that amazing. 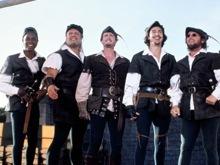 "Because, unlike some other Robin Hoods, I can speak with an English accent."

'Men in Tights' defaults to a DTS-HD Master Audio 5.1 mix, with Dolby Digital Stereo tracks available in English, French, and Spanish (subtitle options are limited to English SDH and Spanish). Even more surprising than the video, the audio for the film shines from time to time, when it wants to.

Dialogue is always clear, no matter the amount of activity in the score or action in any scene, never straying from the front channels. Some background voices can be heard in the rears for ambience in more crowded scenes, but it is hardly discernible or worth note. The opening and closing rap sequences lack any real bass, which is a shame. Dynamic range is a bit limited, as yells maintain volume and pitch like they were normal readings. Ambience can hit at all angles, but often feels a bit focused in front channels. Chain mail clinks and clanks any time guards are on scene, and doesn't fade (like the bassy steps of The Thing in the first 'Fantastic Four' movie). Bass levels go crazy in the Loxley Hall scene, but are otherwise minimal at best. The highlight has to be the motion, as arrows fly through the room extremely fast, distinctly hitting each speaker in the soundstage at a different pitch, and even small silly things like the moving arm in the "stealth catapult" move from speaker to speaker. The wave sequence sticks to the center and front right channels, but to be fair, it is always portrayed in the center of the screen heading to the right. A solid track, to be sure, just nothing truly special. 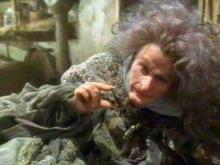 Unlike other new to Blu-ray films in 'The Mel Brooks Collection,' this film comes with an extra that was on the DVD (as well as the requisite trailers for other Brooks films and itself). 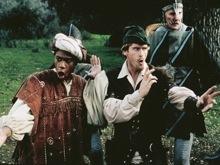 'Robin Hood: Men in Tights' isn't Mel Brooks' finest hour. Some have called it one of the low points in his career, even. I honestly can't get enough of this take on Robin Hood and his "merry" men. The film has stuck with me since the first time I saw it, and remains my favorite Cary Elwes performance. The Blu-ray release of this slapstick comedy has solid audio and video, along with a small pile of extras. With a low MSRP, and the ability to buy it on its own for the first time on Blu-ray, this release comes recommended.

Sale Price 5.99
List Price 9.99
Buy Now
3rd Party 5.49
In Stock.
See what people are saying about this story or others
See Comments in Forum
Previous Next
Pre-Orders
Tomorrow's latest releases