Two years after revolutionizing the science fiction film with his epic Metropolis, director Fritz Lang revisited the genre with an ambitious spectacle that dramatizes the first lunar expedition. Rather than a flight of pure fantasy, Lang, screenwriter Thea von Harbou and a group of technical consultants conceived a modernized "Trip to the Moon" grounded in state-of-the-art astrophysics. Spiced with romance and espionage (including a network of diabolical super-spies straight out of Lang s Mabuse films), Woman in the Moon was one of the most influential science fiction films of its era.

It's strange to take a step back, look at a particular genre, and imagine an era where the content being produced was completely different than it is today. The science fiction genre is one of those that frequently finds new ways to blow me away. The most recent example of this is Fritz Lang's 1929 film 'Woman in the Moon.' Lang had already catapulted the science fiction genre to new heights with his classic film 'Metropolis,' but with '1929' he brings a world to life that feels immediate and practical. At a time just a few decades before the atomic age and the space race, Lang depicted a simple trip to the moon in a way that used the grounded known astrophysics of the era to bring this tall tale to life.

Being a scientific pioneer has a tough price tag associated with it - the ridicule of your peers. For the brilliant scientist Professor Mannfeldt (Klaus Pohl), he is now the laughing stock of the scientific community for postulating that the moon could be an abundant source of gold and that it was in fact, possible to reach the Earth's closest celestial neighbor. Written off as a madman, Mannfeldt lives as a hermit and the only man who believes him is a risk-taking businessman by the name of Helius (Willy Fritsch). Helius is ready to fund Mansfield's idea, but outside interests are keen on taking the technology for themselves.

When an unscrupulous American named Walter Turner (Fritz Rasp) steals the research, Mannfeldt and Helius are forced to take the man on as a member of the crew. Along with Helius' assistant Windegger (Gustav von Wangenheim) and the beautiful Friede (Gerde Maurus), the intrepid explorers become the first human beings to travel to outer space. Along for the ride is Gustav (Gustl Gstettenbaur), a small boy who befriended Mannfeldt and managed to stow away in the rocketship's hold. As they land on the far side of the moon where there is a habitable atmosphere, the thin alliance between Turner, Mannfeldt and Helius will be put to the test risking the lives of the entire crew and the success of the mission. 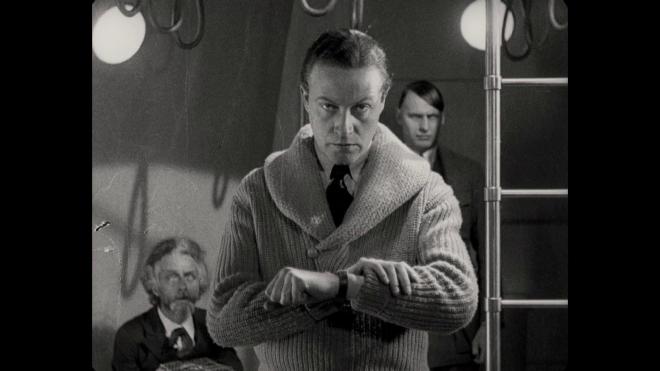 The beautiful thing about Fritz Lang's 'Woman in the Moon' is the sense of wonder that it carries throughout. This is a film with unwavering optimism and heart that serve as a stark contrast to Lang's previous film 'Metropolis.' 'Woman in the Moon' is a science fiction adventure film that believes at its core that man can accomplish wonders in the face of adversity and ridicule. While the Walter Turner character is there to serve as a cautionary example of greed over humanity, it is ultimately the humanity of the people aboard the first rocket to the moon that win the day. When the characters are at their worst and the chips are down in this film, there is always a shining example of how great the human spirit can be - and without giving anything away - is actually rewarded.

What makes me love this movie is its earnestness. This isn't a piece of speculative science fiction, it's rooted in the known astrophysics of the time period. Obviously, time and technological advancements haven't exactly been kind to this film's presentation, but it still emerges as a time capsule containing the breadth of man's aspirations in the early 1920s. This was just after World War I had wrapped up, people were ready for a change and had dreams for a brighter future. 'Woman in the Moon' does mark some moments that humanity isn't flawless or infallible, but it's a movie that believes we are capable of greatness. This film is a work of science fiction at its best and is an absolute joy to watch.

'Woman in the Moon' arrives on Blu-ray thanks to Kino Lorber. Pressed onto a Region A locked BD50 disc, the disc is housed in a standard Blu-ray case and opens directly to a static image main menu with traditional navigation options.

With a 1.33:1 1080p transfer, 'Woman in the Moon' looks absolutely fantastic. While the film exhibits quite a bit of damage in the form of scratches, debris, and speckling, it still looks amazing. Detail is what wins the day for this presentation allowing the viewer to appreciate the intricate production design. From Mannfeldt's dreary home littered with papers and sketches on his walls to the impressive slick rocket to the moon itself, every amazing detail is on display. The black levels, greyscale, and contrast are as stable as they can be and the image does manage to create an incredible sense of depth. Now, there does appear to be some slight image stretching here and there, I'm not sure why it looks that way, but it is so slight that you're not likely to notice or have the viewing experience ruined. Considering this film is nearly 90 years old, it's looks great for its age and in some ways the age-related issues work to the film's advantage.

On a LPCM 2.0 track is the beautiful piano score by Javier Pérez de Azpeitia. Since this is a silent film, the title cards are in German but English translations have been provided. The music makes you feel like you're watching the film in an old movie house that couldn't afford a big orchestra. It's simple but beautiful and really plays to the film well. A wonderful piece of music.

'Woman in the Moon' The First Scientific Science Fiction Film: (SD 15:03) This is a fantastic little feature that explores all of the known science that went into the creation of this film. It's a great companion piece to the main film and helps you understand where Lang and his team were coming from.

Fritz Lang's 'Woman in the Moon' is a striking and bold work of science fiction filmmaking. Sure, the film's presentation of technology is extremely dated, but for its era it was state of the art. it's a film that has a lot to say about where people were at that time period but it also has a brighter and exciting vision about where people were headed. Kino Lorber' has brought the film to Blu-ray in fine order, featuring a fantastic A/V presentation as well as a solid extra feature exploring the science behind the film. If you love vintage science fiction, it doesn't get much better than this. Recommended.

Sale Price 22.99
List Price 29.95
Buy Now
3rd Party 20.98
In Stock.
See what people are saying about this story or others
See Comments in Forum
Previous Next
Pre-Orders
Tomorrow's latest releases