In the aftermath of WWII, strong-willed Antonia (the incomparable Willeke van Almelrooy), returns to her small hometown where she has inherited her mother’s farm. Joined by her free-spirited artist daughter Danielle (Els Dottermans), the pair ingratiate themselves with the town’s tight-knit and eccentric community. As the years unfold, love and tragedy come to Antonia and Danielle, while they foster five generations of family and create a vibrant circle of strong, liberated women.

Some films are remembered better for their supposed politics or social agenda than for actually being a genuinely good and entertaining experience. Such is the case of 'Antonia's Line.' As it won accolades and took home the Best Foreign Language Oscar at the 1996 Academy Awards, it was a film that was widely praised and equally decried by many for being "feminist" and pushing a progressive agenda. To strip this film to those simple soundbites is a cruel disservice to a beautiful, funny, tragic yet heartwarming film.

Antonia (Willeke van Ammelrooy) has returned to the rural farming village of her birth to see her mother on her deathbed. Coming with her is her young daughter Danielle (Els Dottermans). As the pair enter town on foot, Antonia introduces Danielle to the various inhabitants of this rural Dutch community on their way to see Antonia's mother before the old woman dies. After her mother's death, Antonia takes over the farm and together with Danielle, they strike out a routine existence together. Locals like the reclusive and cynical Crooked Finger (Mil Seghers) and the honest and friendly Farmer Bas (Jan Decleir) and his young sons offer welcome and meaningful friendship to the two women. As times passes, Antonia becomes a figurehead of the community slowly changing long-held beliefs and standards and helping these people move beyond old lines of thinking and create new traditions. With the days and weeks stretching out into years and decades, numerous joys and tragedies follow. Through it all Antonia soldiers on and works to keep the people she loves most close to her and protect them as best she can.

The story of 'Antonia's Line' feels very 'David Copperfield' in its ambitious management of time. While we don't meet Antonia at her birth, we see her when her real life begins after the end of World War II and she returns home with her daughter, most notably without a husband. We're left to presume that something must have happened to him or even suppose that she was never married at all as he is never mentioned. Through the trials and tribulations that come from being an independent woman working for herself, we follow Antonia, her family, and the close circle of friends that she adopts into her life. It's a simple story that delicately plays with simple emotions like joy, sorrow, and anger but never exploits them or panders to the audience. 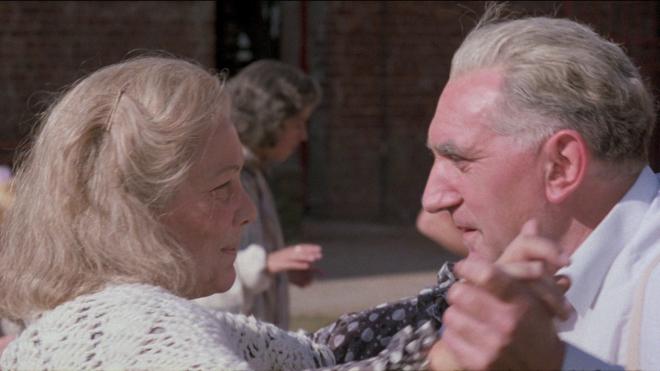 The film is told through the perspective of Antonia's Great-Granddaughter Sarah (Thyrza Ravesteijn). We're told that Antonia expects to die the day we see her wake up and what follows is essentially a prolonged flashback. Throughout the film, we hear the grown voice of Sarah detailing the various aspects of every character's life as they come and go from this world. this structure provides the film with a lyrical beauty to it, almost as if we're hearing a poem being recited. The voice never judges or dramatizes events, even when it involves rape or a revenge killing, the voice just states what is leaving the audience to develop their own emotional attachment or detachment to any given character. I truly appreciate that this film allows the audience to develop their own emotional responses without force-feeding the drama or comedy. it's a fantastic way for the audience to develop and empathetical relationship with the characters on screen. We come to like some of them because they're genuinely good people and relatable. Equally, we come to hate some characters because of their evil natures, because we may have encountered people like that in our own lives.

I was only thirteen years old when this film came out in 1995. When I found out I was going to be reviewing this Blu-ray release, I began to remember the conversations people had about the film. I distinctly remember people discussing the film's feminist leanings in both positive and negative ways. 'Antonia's Line' is certainly a film to get a discussion going as it proudly showcases women who are able to survive on their own without the help of a man. It's not that they don't want men in their lives, it's just that they don't implicitly need men in order to survive. When Danielle decides she want's a child of her own, it doesn't come from a place of wanting a husband, but simply needing sperm, to put it bluntly. That is essentially where the conversation of a "feminist agenda" should start and end. This is a movie about people and life, not simply an overt political statement. This movie is far more interested in presenting life as it is: a series of days, weeks, and years filled with good days and bad, joys and pains, celebrations and sorrows that just so happens to be told through the perspective of a woman. 'Antonia's Line' is a beautiful film that I am very happy to rediscover after 20 years away from it. I don't have many strong memories of seeing this film when it was originally released, but I'm grateful to be able to see this one again as it is truly a wonderful film.

'Antonia's Line' arrives on Blu-ray thanks to Film Movement Classics. Pressed onto a Region Free BD50 disc, the disc comes housed in a clear standard Blu-ray case. Also included inside is a booklet containing chapter notes, photos, and an essay by Thelma Adams. The disc opens to previews for other Film Movement Classics releases before arriving at a static image main menu featuring standard navigation options.

With a 1.78:1 1080p transfer, the image for this release of 'Antonia's Line' leaves a bit to be desired. While it is a pretty looking film and the image is decent, it does have its issues. The artwork states that this is a new 2k digital restoration, and fine film grain is apparent, but there are scenes where the grain can appear overly noisy. Some edge enhancement appears to have been employed and some fine details - especially in wide scenery shots - end up looking crunchy and unrefined. Also hurting this transfer is the heightened contrast levels, everything just appears too bright. While there aren't any devastating blooms to report, the black levels suffer and rarely approach truly inky black and tend to appear more in tones of gray. Shadows are equally troubled so the image has a tendency to look very flat much of the time. There are a few well-lit outdoor scenes where depth is notable and apparent, but they're few and far between. Colors also suffer because of the contrast issues as primaries and earth tones look too bright to be natural and flesh tones skew very pink in many places. This isn't a terrible transfer, but it left me wanting more from it.

With a Dutch Dolby Digital 2.0 stereo mix with English subtitles, 'Antonia's Line' is given an audio track that is serviceable. Dialogue is clean and clear to hear. There is some sense of imaging as objects or characters move across the screen. The beautiful score by Ilona Sekacz does a nice job of rounding out the mix. But taking all of these elements together, there just isn't a lot of punch and presence to this audio mix. For wide open vistas a there is a lacking sense of space or dimension. Voices are present but they tend to sound slightly subdued rather than feeling like the person is in the room with you. It's not terrible but it could sound a lot better.

Archival Interview With Marleen Gorris: (SD 8:52) This is an older interview with the director. Some good material here, but the limited time doesn't allow Marleen Gorris to go into any great amount of detail.

'Antonia's Line' is an absolutely splendid film that has a lot of heart and warmth as it showcases all of the joys and sadnesses that can come from living a long life. Film Movement Classics brings the film to Blu-ray with a decent but not amazing A/V presentation and only one extra feature to speak of. The included essay by Thelma Adams is well worth the read. I'm calling this Blu-ray release of 'Antonia's Line' worth a look only because the movie is so good even though the presentation leaves something to be desired.

Sale Price 21.49
List Price 29.95
Buy Now
3rd Party 14.65
In Stock.
See what people are saying about this story or others
See Comments in Forum
Previous Next
Pre-Orders
Tomorrow's latest releases